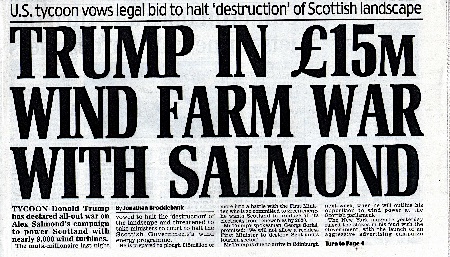 George Sorial, Donald Trump’s legal counsel and spokesperson is quoted in the Daily Mail today as saying that,

“We will not allow a reckless First Minister to (sic) destroy Scotland’s tourism sector”.

I am not sure upon what authority Mr Sorial draws to claim to have any ability to do such a thing. If the Scottish Government wishes to “destroy Scotland’s tourism sector”, then it is free to do so. Last time I checked, neither Mr Sorial nor Mr Trump are UK citizens resident in Scotland and therefore have no business in “not allowing” any democratically elected government in Scotland to do what they wish to do.

The Trump Organisation has legitimate concerns over the impact of the European Offshore Wind Deployment Centre on its golf course development at Menie and has outlined these in a (rather confused) submission to the Economy, Energy and Tourism Committee of the Scottish Parliament. No doubt the Committee will listen carefully to what he has to say next week.

But before anyone sheds a tear from poor Mr Trump, please note two points.

(1) Mr Trump claims in his submission that “If I had known about the current wind turbine proposals, I would never have built in Scotland” (pg 6 of his submission) But he knew full well that this project was in the planning stages before he bought the Menie Estate in May 2006. He described the proposal in February 2006 as a “deal killer” in discussions with Scottish Development International. Nevertheless, he went full speed ahead, knowing all the time that the offshore wind project was to subject to the same process of planning consent as his own golf course project. [NOTE Thur 19 April – this timeline not now the case – see subsequent blog post.]

(2) Contrary to what Mr Sorial is quoted as saying in the Daily Mail viz,

“Mr Sorial said there was no limit on the campaign and warned his boss was prepared to spend many millions to protect his investment – his £750 million golfing resort on the Menie Estate north of Aberdeen.”

and in his submission viz,

“In fact, my development in Scotland, despite an investment of tens of millions of pounds, is debt free” (pg 2 of submission)

the Trump Organisation acquired Menie Estate for around £6.7 million and have invested a total of £6.5 million since then (further details here).

Donald Trump Senior is (and remains) a GlobalScot together with Donald Trump jun. and George Sorial.

Will they still be GlobalScots after their appearance at the Scottish Parliament on 25 April?

Donald Trump will be giving evidence to the Energy, Tourism and Economy Committee of the Scottish Parliament on 25 April 2012. More background to this in Holyrood magazine here. Scottish Greens have called on Electoral Commission to investigate claims that Trump will be funding campaigns in the forthcoming local council elections.

Among my emails this morning was one claiming that statements I have made on my blogs on the GlobalScot programme are “inaccurate and libelous” and that “you are now on notice”. For the record, libel is not a civil wrong in Scotland although defamation is (which is my attempt at being light-hearted – in Scots law the term is defamation). A request was made to remove all material relating to the Trump Organisation

I have now made a minor edit to my previous blog but will not be removing any further material.

According to this email from Kevin Pringle (released as part of the publication of correspondence between the Scottish government and the Trump Organisation), since its launch in November 2001, the GlobalScot network “has grown to an international membership of nearly 950 individuals.” That was in December 2007.

I would like it to be made smaller still – by a further 3.

Scottish Enterprise have stated that, contrary to the claim made in this letter from Alex Salmond,

“We don’t have any record of Rupert Murdoch responding to the original invitation or any further correspondence with him regarding GlobalScot activities.”

I am happy therefore to confirm that Rupert Murdoch is NOT a GlobalScot.