Donald Trump is still a GlobalScot

It was revealed today that the Scottish Government had asked Donald Trump to put his name to a statement supporting their decision to release Abdelbaset al-Megrah from prison in July 2009. I suspect Mr Trump was approached as he is a GlobalScot.

Last week, Donald Trump confirmed that he was planning a “massive lawsuit” against the Scottish Government and claimed that Alex Salmond had a “death wish for Scotland.”

Why is this man still a GlobalScot – a prestigious list of International Ambassadors for Scotland?

See Previous Posts in GlobalScot (particularly earliest one) outlining the scheme and with links to data list of all GlobalScots.

I am the evidence 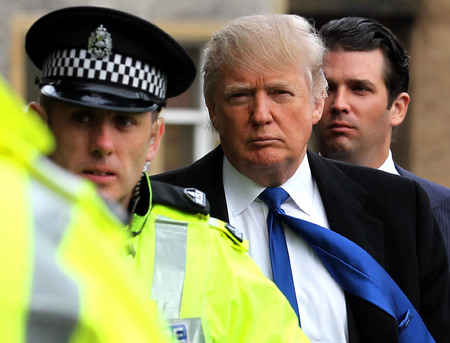 There is a programme on Radio 4 called The Unbelievable Truth in which panellists compete to see how many nuggets of truth they are able to hide among their lies and as an example of the Alice in Wonderland world in which Donald Trump inhabits, consider this

Following the appearance of Donald Trump and Trump organisation Executive Vice-President, George Sorial, at the Economy, Energy and Tourism Committee of the Scottish Parliament on 25 April 2012, I can confirm that he repeated 3 of the 10 lies documented here and added one more. The Official Report of the Committee meeting is available here and the (Col xxxx) references are to column numbers from the report.

“I have invested tens of millions of pounds in my site on the North Sea coast.” (col 1342)

“By the time that I bought the land, I did not think that the wind farm would happen.” (col 1344)

“I felt confident by the time that I bought the land that the wind farm would not happen.” (col 1344)

As revealed in the 21 February 2006 “deal killer” email, Scottish Development International (SDI) were telling the Scottish Executive that their “client” was “about to conclude a deal within the next few days” and was seeking “an authoritative view as quickly as possible from the Scottish Executive on the wind farm proposal”. Donald Trump had acquired the bulk of Menie Estate for £4.498 million a month previously on 27 January 2006.

SDI can only have obtained these reported views from the Trump Organisation and I have today asked SDI to confirm the source of their information. But as things stand, Donald Trump misled the Committee by saying that by the time he had bought the land, he was confident that the EOWDC project “would not happen” if a month later he was desperately seeking assurances.

Under questioning by Patrick Harvie MSP, George Sorial reacted angrily to this allegation.

George Sorial: “Mr Harvie asked about the e-mail from SDI. Why does he not ask SDI that question? It wrote the e-mail. The e-mail was not to us; it was from SDI to the Scottish Government. It is not reasonable for Mr Harvie to ask us to speculate on what SDI meant by what it said. That is absolutely ridiculous.” (col 1346)

Patrick Harvie: “On 21 February 2006, following discussions with yourselves, SDI wrote an e-mail that indicated that it was clearly under the impression that the deal would be completed in a few days.”(col 1346)

George Sorial: “That is hearsay. Were we copied in on that e-mail? It was an e-mail from SDI to the Scottish Government. Why would you even bring it up? It has no bearing on this hearing. That is ridiculous.” (col 1347)

Of course the email was SDI to the Scottish Government but the views reported were attributed to the Trump Organisation and it is patently ridiculous to suggest that they invented these views. Mr Sorial will be pleased to know that SDI have now been asked about the email. (see UPDATE)

In response to a line of questioning about a Visit Scotland poll on wind farms and tourism, Mr Trump replied,

“No one knows more about polls than I do; in fact, if you want to hear about polls, I had 93 per cent approval for my project when people were fighting me on it.” (1353)

There was one additional lie in Trump’s evidence. This was the claim that Abdel Basset Ali al-Megrahi

The Economy, Energy & Tourism Committee today published the report on its inquiry. Paragraph 288 notes that “While some strongly held localised and anecdotal opinion exists, the Committee has seen no empirical evidence which demonstrates that the tourism industry in Scotland will be adversely affected by the wider deployment of renewable energy projects, particularly onshore and offshore wind.”

In relation to the deal killer email, Scottish Development International replied to me in May 2012 to say that they do not have any information relating to the claims made in the email since “the author of the email advises, that to their recollection. much of the information was covered in telephone conversations and was not formally recorded.”

The following MSPs agree that Donald Trump Senior, Donald Trump Junior and George Sorial should cease to be members of the GlobalScot network.

5 MSPs are happy for Trump et al to remain global ambassadors for Scotland.