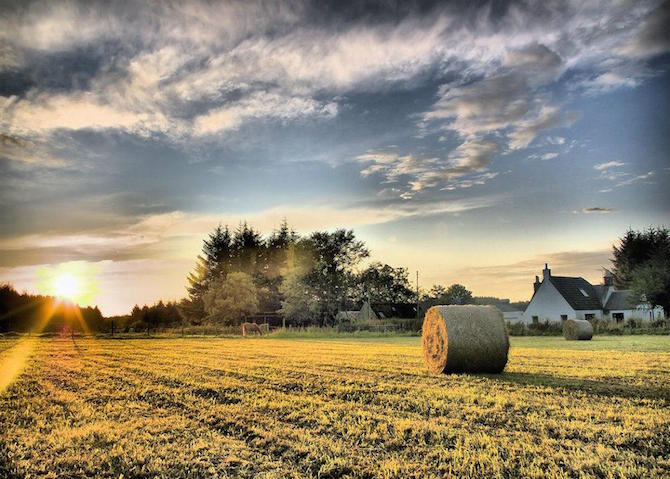 The Scottish Tenant Farmers Association has welcomed the focus given to land and tenancy reform at last week’s SNP conference and the clear signal from SNP grassroots support for strengthening the land reform proposals in the current bill.  The delegate’s call followed a powerful documentary on Channel 4 TV which highlighted what are seen as some of the worst areas of bad land and estate management in Scotland.

The conference also heard pleas to halt the impending eviction of tenant farmer Andrew Stoddart whose tenancy on Colstoun Mains in East Lothian is due to come to an end in a few short weeks.  Andrew Stoddart, who also spoke at a fringe event, is the first of the Salvesen Riddell tenants to be forced to quit their farms following the Remedial Order passed by the Scottish Parliament last year.

Commenting on the grassroots “rebellion” at the SNP conference, STFA Chairman Christopher Nicholson said: “STFA has been concerned that the government may have been wilting in the face of intense pressure from landed interests, intent on weakening what can only be seen as an already diluted bill.  We hope that this message from the conference will strengthen the government’s resolve to deliver more radical and much needed reforms to create fairer conditions for tenant farmers, stimulating investment on agriculture, greater access to land and encouraging opportunities for new entrants.”

STFA has also become appalled at the recent treatment of tenant farmers affected by the Salvesen Riddell Remedial Order, including Andrew Stoddart who faces imminent eviction without having had the opportunity to take part in the government’s mediation process or be considered for any recompense which should be due from the government following the implementation of the Remedial Order.

STFA Director, Angus McCall who has been involved in the Salvesen Riddell debacle for the last few years said: “This whole episode has become Scotland’s shame which has seen the victims of a legal error hung out to dry by uncaring government lawyers and an inflexible government process.

“This tragic episode stemmed from legislation passed in 2003 which was proved to be defective.  The UK Supreme Court then instructed the Scottish parliament to remedy the situation and, as a consequence, 8 families will lose their farms and livelihoods.  However, rather than seeking to fulfil commitments made by government to parliament and the industry,  government lawyers are abdicating all responsibility and liability and refusing point blank to consider any compensation package for the affected tenants.  These tenants are now faced with a lengthy and expensive court battle to exert their rights.

“STFA has already written, and is writing again to the First Minister, Cabinet Secretary, Richard Lochhead, the RACCE committee and MSPs to get the matter resolved and allow these tenants and their families to move their lives on, but all to no avail.  Ministers, MSPs and some officials have expressed a willingness to help, but seem to be held to ransom by lawyers.

“We all appreciate that this is a complex situation, but the rulers of this country must accept a moral responsibility for the damage done though the actions of a previous government to these families and move without further delay to find a way towards an equitable settlement rather than forcing them into a long drawn out, expensive and life sapping legal battle.  This has been devastating for all concerned and, after 18 months of prevarication, the tenants’ lives are still on hold and they are no further on in knowing their future.

“This affair has been a well-kept secret, but it must be time for the Scottish people to wake up and realise what is going on and allow common decency and a sense of fair play to prevail and put an end to this sorry affair before any lives are tragically lost as has happened in the past?”

The Scottish Government has today published the Final Report of its  Review of Agricultural Holdings Legislation.

The Scottish Government and the Danish Anthropologist 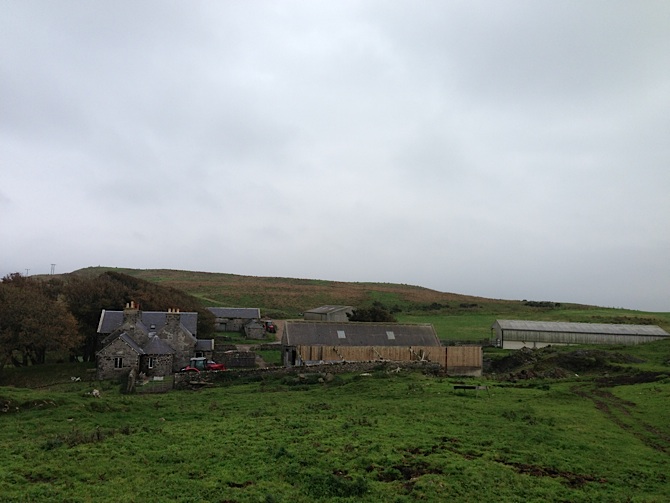 Associate professor Morten Nielsen is a Danish anthropologist currently in the Department of Culture and Society at Aarhus University. Based on empirical research carried out in Latin America, sub-Saharan Africa and the UK, his research focuses on land use, house-building and property rights in both urban and rural areas. He is currently undertaking an in-depth study of land relations and property rights among tenant farmers on Islay.

“This is the Scottish Government. Is this Dr. Morten Nielsen?”

I had just come off the Islay ferry and was heading for Inveraray when my phone rang and an energetic woman, who was apparently the living embodiment of the Scottish Government, wanted to know if she was, in fact, speaking with me. I immediately assumed that I had done something wrong. Having spent more than two months doing ethnographic fieldwork among tenant farmers on Islay, my initial thought was that I had probably forgotten to fill out some research permit and now my increasing absent-mindedness had finally backfired.

Much to my surprise, however, the polite state official was not at all trying to expose my academic flaws but, rather, wanted to discuss my on-going research about agricultural tenancies and property rights on Islay. In order to realise comprehensive land reforms in Scotland, she told me, information was badly needed and my research could potentially provide insights into the intricacies of negotiating land rights in the Highlands and Islands. Having an overall interest in the dissemination of qualitative research, I immediately agreed to meet with the polite embodiment of the Scottish Government. As we could not find an available date for us to meet up on Islay, the state official agreed to visit me in Crail, Fife a few weeks later, on a Saturday, when I was visiting some friends on my way back to Denmark.

To Scottish readers, this vignette might not constitute anything out of the ordinary: a foreign researcher being approached by a state official interested in discussing key findings on issues that are high on the political agenda. However, having carried out research on land and property rights in Latin America and sub-Saharan Africa since 2000, I can firmly say that this is the first time ever that I have been contacted personally by a state official interested in the findings from a very short empirical investigation and, moreover, one who was prepared to meet up on a day off.

In both regions where I have previously worked, access to officials at different levels has been paramount to my research but the initiative for making contact has always been mine. The obvious question to ask was therefore why did she feel the urge to contact me apparently out of the blue? In order to respond to this question, we need to discard the tempting but unfortunately unlikely possibility that she was in awe of my research findings. At the time of our telephone conversation I had carried out fieldwork for less than two months and had as yet published nothing in academic journals or in more accessible public media. The likely response to the puzzling question is therefore quite banal. It wasn’t that I was the best of all the scientists doing research ‘on the ground’; rather, I was the only researcher doing research ‘on the ground’!

In Latin America and sub-Saharan Africa, research into property rights and access to agricultural land is heavily supported and funded by external stakeholders, such as, for example, the UK Government. Hence, whenever I do ethnographic research in sub-Saharan Africa, I am certain to meet several of my colleagues doing research on exactly the same issues as myself. In Scotland, however, the situation is markedly different. Since I started doing research, I have come across very few colleagues doing what I do (which is to try to understand what people do ‘on the ground’ when, for example, farmers attempt to acquire secure access to tenanted land). To be more precise, I have met none!

Hence, although my conversation with the Scottish state official paved the way for disseminating findings from my research project to relevant stakeholders, it also made apparent a disturbing problem that slows down the realisation of wide-ranging land reforms. The on-going discussion about land and property rights in Scotland is based on very little knowledge about what actually goes on ‘on the ground’ regarding such crucial questions as, for example, how do negotiations between land owner and land tenant take place?; how are rent reviews actually settled?; how do conflicts among farmers and between tenants and land owners erupt and how are they settled?; why do so few tenants use the land court to settle land disputes? The list goes on…

Let me try to flesh out this puzzling predicament a bit further by turning to some of the very interesting issues raised by the Scottish Affairs Committee (SAC) in its recently published Interim Report. (2) Initially, it is noted with lucid honesty that,

“The first step in any meaningful strategy of land reform must be the creation of data on ownership and land values which    is comprehensive and accessible. Regrettably Scotland lags behind most comparable European countries in providing such data”

When discussing ownership of vacant land in Scotland, the disturbing lack of information is further emphasized. According to Professor Adams, University of Glasgow,

One consequence being that,

“…too often communities are left guessing who owns the land that they live, work and socialise in”.

Taking SAC’s insights as an apt example of an overall problem then, given the lack of information, stakeholders involved in the ongoing process of trying to improve the existing legislation on land and property rights are often in the dark about what happens ‘on the ground’.

What are then the consequences of this worrying lack of information? Why is it that information about what goes on ‘on the ground’ is so crucial for the successful realization of ambitious land reforms? As an anthropologist having working on these issues for the last 14 years, I do believe that it is only through careful examination of how land is actually appropriated, negotiated and distributed that new and potentially revolutionary mechanisms of land distribution can be envisaged and put into action. Let me briefly sketch out only a few areas of concern that I have identified through my three months of fieldwork among farmers in Islay:

This is only a very cursory and superficial outline of a few of the many issues that I have discussed with farmers on Islay. Still, as is probably clear by now, I will claim that it is only through detailed examinations of happens ‘on the ground’ that such crucial insights might be identified and subsequently serve as a basis for establishing new mechanisms for a more just system of land distribution.

Let me conclude with an example of what such valuable insights might be used for. During the 1990s, the Mozambican government in collaboration with donors and local and international interest groups managed to involve huge sections of the Mozambican population in widespread debates on the need for a new and democratic land law. Through massive investments, large-scale research projects and ongoing public debates, a new Land Law was finally formulated that was (and still is) the most progressive piece of legislation on land and property rights in sub-Saharan Africa. (3) Today, it is widely acknowledged by all stakeholders involved in the process that the radical and positive achievements could never have been reached if it had not been for the continuous production of information about how Mozambican land was actually appropriated, negotiated and distributed.

In this light, the debate on land and property rights in Scotland is that of a developing third world country that can one day hope to reach the progressive level of developed countries, such as Mozambique.

(1) Morten Nielsen can be contacted by email at etnomn@cas.au.dk

(3) For a very interesting read, I highly recommend Chris Tanner’s analysis of the process leading up to the approval of the 1997 Land Law.