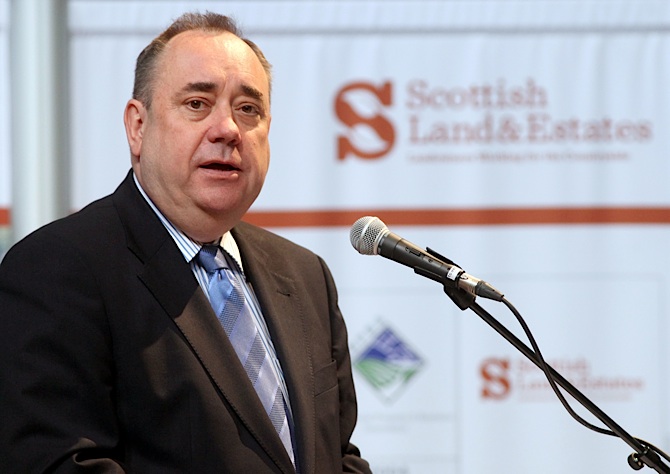 Well, Alex Salmond duly gave his speech to the AGM of Scottish Land and Estates on Tuesday 29 May. (1) Unfortunately, he chose not to take up the many suggestions made in response to my earlier blog and, instead, gave a bland speech which included nothing to cause the landed class to lose any sleep. Indeed, it gave them much comfort with many warm words for the role that landowners play in modern Scotland. In particular, Salmond welcomed a new “Centre for Rural Development” being set up by the lairds’ trade union – “a first-class initiative”, he observed. I await with interest its inquiry into the role of Scotland’s distinctive pattern of landownership on rural development.

As @DavidAllenGreen reminded us today, “There nothing more agreeable in life than to make peace with the Establishment – and nothing more corrupting” – A.J.P. Taylor. This speech was an opportunity to deliver some important political messages but none were forthcoming. The First Minister might (for example) have followed up his statement:

“I know that the theme of today’s AGM is boosting rural recovery. That is entirely fitting, because the businesses you represent have a combined turnover well in excess of £1 billion. You are of major importance to several of the key economic sectors on which Scotland’s future economic prosperity will be based.”

with a comment about why it was that Scotland’s landowners are exempt from business rates. He did not. And this, I think, is a reflection on and a consequence of, the demise of any clear policy agenda on land reform.

Perhaps the best way to appreciate the significance of Salmond’s speech – the first by a First Minister to Scotland’s landed class as far as I can tell – is to compare it with the McEwen Memorial Lecture delivered by Donald Dewar in 1998 entitled “Land Reform in the 21st Century” – an ambitious and forward looking agenda for change delivered a year before devolution in 1999.

Why did Alex Salmond not take the opportunity to lay out his vision of how Scotland might look post-independence? He was not shy of doing so when he was an MP as this debate in the House of Commons demonstrates.

(1) I should make it clear that I was not present and thus cannot give a first hand impression of Mr Salmond’s delivery or demeanour nor that of the assembled landowners.