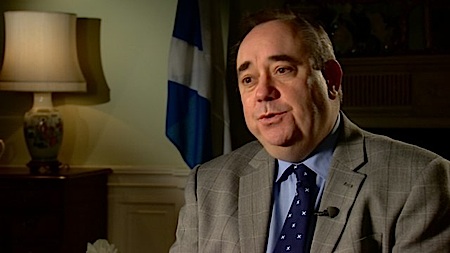 UPDATE 0900 18 May 2012 A spokesperson for Mr Salmond told the West Highland Free Press that “it is too early to give any details of what the First Minister might say.”

I’m delighted to report that Alex Salmond has asked me to assist him in writing his speech to Scottish Landowners at their AGM on 29 May 2012. (1) Only some lines, mind, not the whole damn thing. This is the first time to my knowledge that a First Minister of Scotland has addressed their lairdships. With four years left of Government before the next election and a healthy Parliamentary majority, Salmond and the SNP can do as they please (within the law of course).

So what will please? I began my research with a speech Alex Salmond made in the House of Commons on 6 November 1996. It would be inappropriate to simply give this same speech again. There are, after all, some obvious clues that it is dated (the opening lines for example, where he congratulates President Clinton on his re-election). But the general thrust of it seems OK. Maybe I should excise the dated stuff and add some ideas on what Salmond and his party can now do 15 years on now that we have a Scottish Parliament and he is First Minister.

Where to start? I’ve decided to crowdsource this. So feel free to provide your suggestions on twitter @andywightman or facebook. You can also leave comments at foot of this post. I will add lines here as they come in and will build up to the great day on 29th (which is also my birthday). Here goes.

1. “Last week I was in Norway. It is clear that Scotland has a lot to learn from the Norwegians about land distribution and I have asked my officials to prepare a report on the matter.”

2. “As an elected Scottish politician, I am sure I don’t need to remind you that though you may own the land, we the people own the land law.”

3. “C’mon yev hud mair than a fair crack o the whip fer hunners o years. Gies a’ the land an’ awa’ an’ dinnae return.” from @calumsmac

4. “It is not acceptable for you to register land in companies in offshore tax havens and we will amend the Land Registration Bill acccordingly.”

5.Â “As I said in my opening speech to Parliament on 25 May 2011, When we control our natural assets as a sovereign power, the profit from the land should go to all“

6. “We look forward to bringing forward proposals for reform of inheritance law to make sure that each new generation has equitable access to land.”

7. “Housing is vital for future of Scotland and we will be introducing new minimum tenancy terms of ten years.”

8. “They keep telling us this oor country. Most of us don’t even have as much as a vegetable patch in this country.” from @rattlecans

10.Â In an independent Scotland we look forward to working with you to increase your membership from around 2500 to nearer 250,000.

(1) I should make clear that First Minister Salmond has of course not really asked me to do this. This is a spoof. Journalists beware.