The future of farming subsidies 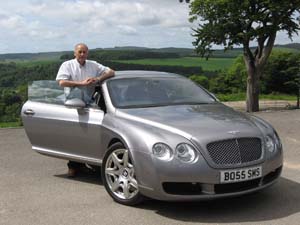 Brian Pack has today published his final report on the future of farming support in Scotland. Among a number of recommendations, he argues that there should be no cap on individual payments of public subsidies for farming (page 69 of his report).

Let us ponder that. During the ten years from 2000 to 2009, the top 50 recipients of agricultural subsidy received £168 million – an average of over £3.3 million per farming business. These include farming businesses run by some of the wealthiest people in the country such as the Earl of Seafield, Earl of Moray, Duke of Roxburghe and the Duke of Buccleuch. (see Table 13 in The Poor Had No Lawyers for full breakdown). They are not even obliged by the rules of the Single Farm Payment Scheme to do any real farming. And they can even write off against tax the costs of acquiring new public subsidy entitlements (so the public pays twice).

Such recipients includes Stephen Strathdee (pictured above with what appears to be a Bentley Continental GT) . His company, Glenmore Properties Ltd. (from May 2010 Strathdee Properties Ltd.) owns 39 farms. On one farm alone, 18 housing plots have been sold for £1.3 million since the the farm was originally bought for £300,000). In March 2009, a total of 24 plots of land were being advertised for sale at a total guide price of £2,935,000. He is a farmer and a property developer.

Mr Strathdee and his family clearly work hard. He started life with £200 in 1970.

But why, when benefits received by poor families in the UK are to be capped at £26,000 and housing benefit at £400 per week, did Mr Strathde’s company receive £1,038,124.52 in public subsidy in 2009? And why, in the years since 2000, did it receive a total of £3.5 million in public subsidy? And why do all the other noble families listed above receive such largesse from the public purse?

Is this the fair society that the coalition government wants to promote?