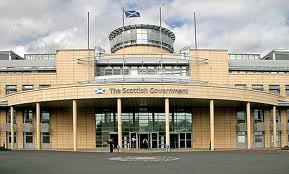 When John Swinney approved the tax increment finance scheme for Leith docks last week (see previous post), I wonder if he was aware that among the business rate payers who would be picking up the tab for paying back the Â£84 million loan to Edinburgh Council is none other than himself!

Well, Scottish Ministers actually and, in turn, Scottish taxpayers.The Scottish government owns a massive office in Victoria Quay with a rateable value of Â£3.92 million on which it pays annually rates of Â£1,622,880 to the City of Edinburgh Council. Folllowing the tax increment financing scheme, the rental value of Victoria Quay will rise (that’s the logic of TIF) and so the Scottish Governemnt will need to find additional funds to pay the now higher business rates.

Meanwhile the property developers sitting on all that vacant land will form part of the underserving rich who do nothing but see the value of their property portfolios rising while they sleep. Not fair, I say. We need land value taxation.