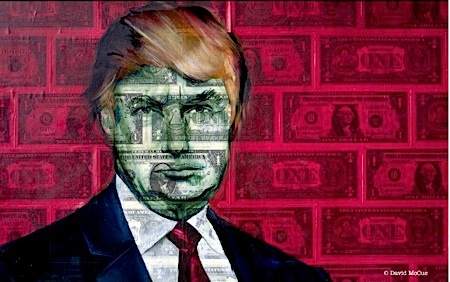 Image © David McCue from movie poster of You’ve Been Trumped

I had promised a blog about my conversation with Donald Trump jun. last year. However, for reasons which will become clear, I am now going to delay that until I have this one out of the way.

Donald Trump has a reputation for exaggeration and hyperbole, bullshit and lies. In this post I will ignore the first three and concentrate on the last – the lies. As Trump prepares to give evidence before a Scottish Parliamentary Committee where he will be expected to tell the truth, it is worth reminding ourselves of the catalogue of lies he has told during the past 6 years.

But first of all, what is a lie? My Collins dictionary defines it as

1.to speak untruthfully with intent to mislead or deceive
2.to convey a false impression or practice deception
3.an untrue or deceptive statement deliberately intended to deceive

Here are ten of Trump’s lies.

In January 2011, Trump stated that “We have consistently said that we have no interest in compulsory purchase and have never applied for it.” However, as we now know, Trump requested that Aberdeenshire Council use its powers of compulsory purchase to acquire a number of parcels of land including those owned by residents of Menie. (1)

Trump has repeatedly claimed that he had a deal, a promise or reassurances that wind turbines would not be built within view of his golf resort

AsI stated five years, I would not have gone forward with wind turbines off our coastline and was repeatedly promised, as an incentive for us to proceed with my project, that wind turbines would not be destroying and distorting Aberdeen’s magnificent coastline. (2)

No evidence of such a deal has ever been produced and Scottish Ministers have consistently denied the existence of any deal. If Trump has the evidence, he should produce it. Otherwise, he should shut up.

3. He was stealing our property

Mr Trump has consistently defamed David Milne, the owner of Hermit Point. For example, on Channel 4, he claimed, “We had a man, he built a fence and he was stealing our property because he built the fence on our land.” (3)

The man whom Mr Trump is referring to is David Milne. The fence in question is a fence built, not by Mr Milne, but by Thomas Griffin, the previous owner of Menie Estate. The fence was built some 3m from the boundary with David Milne’s property and Mr Milne has never claimed the land as his though he has done both Mr Griffin and Mr Trump a favour by maintaining the strip of land. As a thank you, Mr TrumpÂ threatened legal action on the basis of blatant lies and sent Mr Milne a bill for £2820. (4)

4. He has a garage on my land and built it without permits

Donald Trump has also claimed that David Milne has built a garage on his land. At Trump’s press conference on 20 June 2011, he claimed that “He currently has part of his garage on our property so we’ve asked him to move it.” & “He built his shed without permits.” Both statements are blatant lies. Mr Milne’s garage is on his own land as I prove in my Donald Trump’s Ego Trip report at page 15. As for the permits, here is the Planning Consent.

5. We don’t need his property

In relation to Michael Forbes’ property, Donald Trump claimed in August 2008 that “I don’t need it. It’s not in the way of what I’m doing” (5) Six months later, he asked for compulsory purchase powers on the basis that Forbes’ land and other plots were “necessary for the proper planning of the development.” (6)

No environmental groups supported Trump’s golf resort at Menie. All the groups that took part in the public inquiry opposed it. There has been no “tremendous support” never mind a majority support.

In Trump’s evidence to the Scottish Parliament’s Economy, Energy and Tourism Committee, he claimed that “my development in Scotland, despite an investment of tens of millions of pounds, is debt free. (8) Trump’s spokesperson, Sarah Malone claimed that  We’ve spent well in excess of £50 million. (9)

Trump told the Scottish Government in February 2006 that the “deal” on the golf resort would be concluded in the “next few days” (10). However, Trump had concluded the deal on 27 January 2006. (12)

Donald Trump has repeatedly claimed that

10. Cutting off the water

On 28 July 2010, the water supply of the Forbes’ family was cut off by Trump’s contractors. His spokesperson, George Sorial claimed that “The matter was addressed immediately and it was repaired immediately.” The water was actually restored on 3 August 2010. (14)