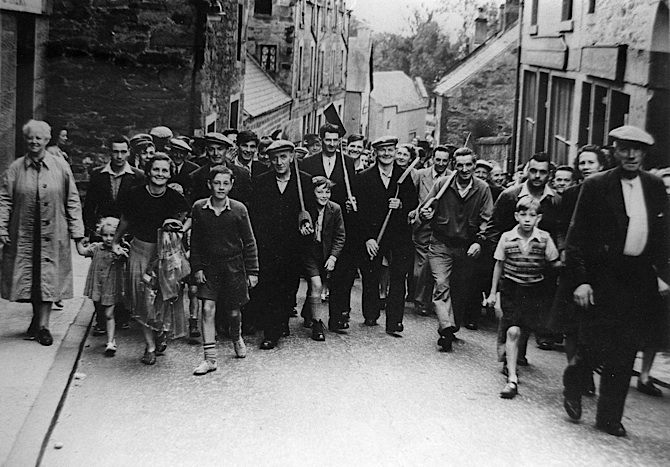 Residents of Alyth marching to the Hill of Alyth Common to defend their land against encroachment 24 July 1949.

The Land Registration etc. (Scotland) Bill was introduced to Parliament on 1 December (see previous two posts). In this, the third blog on the topic, I want to highlight the issue of common land.

Scotland’s laws of landownership have been devised to favour private property. For centuries, common land has been under attack. As Tom Johnston observed in his The History of the Working Classes in Scotland,

It has now virtually all disappeared. What marks Scotland out is the scale of this onslaught compared with other European countries. The situation stands in stark contrast to that in England and Wales, for example, where common land has statutory protection and registration can be applied for through local authorities by the public. The UK Government DEFRA provides full details of the topic here. You can even download a list of ALL the common land in England and Wales here.

For the avoidance of doubt, there is very little common land left in Scotland. Exactly how much is unclear and obtaining any accurate statistics is not helped by the fact that many lawyers and government officials deny that commons even exist in the first place. This campaign is going to be an uphill struggle.

A couple of examples might assist in understanding the problem.

The first concerns a 400 acre commonty in Perthshire. I do not wish to make the location public as it is hoped that some restorative justice can yet be sought but I have a copy of the title deeds in my possession.

Three local landowners drafted and lodged a deed splitting the commonty among themselves. The deed claims that they have sole rights to the common. This is doubtful in the extreme. Nevertheless the deed was accepted in the Register of Sasines but not before the Keeper had made a note in the margin that “Agent aware that granters apparently only have title to rights in pasturage in [name of commonty]”. In other words, not only did the landowners know that they had no property rights, their lawyer also knew. Neverthless, the deed stands. This is what I refer to as legalised theft.

It is worth remembering that in the London riots last summer, an engineering student was jailed for 6 months for stealing a £3.50 case of bottled water.

In another case, in the parish of Carluke, there is a happier story. A landowner registered a title in the Land register and, as part of his title was recorded his rights of use of the parish common together with the rights of access over the loan leading to it. This is probably the sole example of a common registered in the Land Register. The common itself, however, is not registered for the simple reason that there exists no mechanism to do so.

Some would argue that since there is so little common land left, that there is little point in making any effort to preserve it. A more intelligent response is to argue that what little is left is such an important part of our cultural heritage that every effort should be made to identify and preserve it. That is my position and the Land Registration Bill can help is the will exists

The Bill is relevant here for the simple reason that the law of prescription and a non domino titles (see previous post) have been (and continue to be) responsible for the theft of our commons. As the Bill stands, those devices can continue to be used to appropriate commons. The authors of the Bill argue that a number of its provisions provide the means to secure common land (keepre induced registration, shared title plots – even the new arrangements for a non domino deeds). But these are imperfect and unreliable. They rely on their being an owner (there is not – these are commons). They also rely on citizens using unfamiliar legal processes to protect land rights which they may well not even know exist in the first place.

The central problem is that in Scotland there is no means to register common land and it stands vulnerable to prescriptive claims. A means needs to be devised to protect them by assertive action by citizens to register them. What is needed is a simple solution that provides a statutory mechanism for members of the public to submit an application for recording titles to areas of common land. This could take the following form.

The Land Register recognises commons as a class of property and admits applications for registration from any member of the public residing in the civil parish in which the land is situated. For so long as the application is pending, no other private claims will be entertained by the Keeper. The application will advertised publicly on the Registers of Scotland website for a minimum period of six months and circulated to the local authority, community councils and published in local newspapers. The publicity should include the name of the claimant and their grounds for the claim, the extent of the land being claimed, a report on investigations into its legal history, and an invitation to lodge rival claims.

The Lands tribunal shall adjudicate on any contested claims but if none are made, then the Keeper shall record a title and the land shall be registered as a common. Statutory power for their management would be vested in local authorities.

If this can be done though local authorities in England and Wales I don’t see what the problem should be in Scotland other than that for centuries, landed and legal elites have conspired to airbrush commons from our history and from the map of Scotland.

(1) The History of the Working Classes in Scotland, pg 164