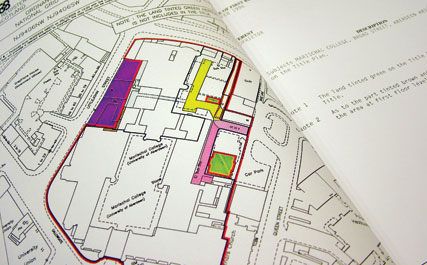 On 1 December 2011, the Scottish Government published the Land Registration etc. (Scotland) Bill.  It provides a refreshed statutory basis for the process of land registration in Scotland – a process initiated by the Land Registration (Scotland) Act 1979 – and which will eventually replace the ancient Register of Sasines. The Bill follows an earlier pre-legislative scrutiny process run by the Registers of Scotland.

You would be forgiven, however, for not having noticed.

There was no press release issued by the Scottish Government (though the Registers of Scotland issued one) and the mainstream media (as far as I could note) carried no news of the event. And for a bill that purports to reveal who owns Scotland it was also notable that Alex Salmond did not mention it in his September 2011 speech outlining the Government’s legislative programme. Had I been his adviser I would have suggested he trumpet the fact that the SNP government was at last going to put in place the necessary means to finally answer the question – who owns Scotland? This would have had populist appeal as well as practical utility.

I mention this by way of preamble since it tells us something about how the SNP are approaching this bill. It appears that they regard it as substantially a technical bill. They also appear to present it as a bill that is to do with “modern market economies” and which will ensure the “smooth running of a vibrant property market” (1) This is underpinned by the fact that the Minister with responsibility for piloting the Bill through Parliament is Fergus Ewing, the Minister for Energy, Enterprise and Tourism (who has responsibility for the Registers of Scotland) rather than either Kenny MacAskill or Roseanna Cunningham who hold the Justice brief and, specifically, the civil law of Scotland.

Admittedly, much of the Bill is technical. But that does not diminish its significance since there are also important public policy dimensions to the bill which have not been addressed.

This is the first time in the history of Scotland that a democratically-elected Scottish Parliament has considered the statutory basis for determining who owns land in Scotland. Given this, it might be expected that there would be something more of a debate about the contents of the bill and rather more publicity. As the bill begins its Stage 1 scrutiny, there is little more than a mild ripple of interest among members of the legal profession. This reflects the history of the bill which is seen by Government as a technical measure and whose genesis lies in a request by the Keeper (the official who heads the Registers of Scotland is charged with maintenance of 16 public registers, the most important of which are the Register of Sasines and the Land Register) in 2002 to the Scottish Law Commission (SLC) to review the law of land registration. The Bill substantially implements the draft bill published by the SLC in 2010.

The issues were plain to see. The 1979 Act which introduced the Land Register is the shortest land registration statute in the world at 30 sections plus 4 brief schedules. In contrast, the English statute runs to 136 sections plus 13 schedules and the German Act to 144 sections. In the words of the SLC,

“The 1979 Act”s brevity means that on numerous issues it is simply silent. Of course, no legislation succeeds in covering everything. There are always holes. But the 1979 Act is a Swiss cheese.” (2)

As the years have gone by, therefore, questions have arisen in the holes in the cheese, the solutions have been essentially made up by the Keeper and incorporated into the Registration of Title Practice Book. This is highly unsatisfactory and provides the rational for the current bill which is to review a wide range of technical matters that are not the subject of any statutory force (but nevertheless through practice underpin land registration) and to give these statutory authority. The SLC did what it was asked to do and provided a thorough and expert analysis of the various issues (how the register should be remedied for inaccuracies, protecting the interests of sellers during the crucial hours and days of the acquisition of land etc.)

However, land registration is not simply a process of technical issues faced by conveyancers. It is the legal basis for providing real rights to own property. Without a recorded title, you merely have a contractual arrangement between a seller and a buyer which has no force beyond those two parties and (importantly) no binding force on successors. The real value of a public land register is that it provides real as opposed to personal rights which are defendable against the whole world. The Land Register goes further than the Register of Sasines which it replace and provides both indemnity against any defects in recording and a state-guaranteed title

All of which begs questions of the circumstances in which the state should provide indemnity, what claims for recording should be eligible for consideration, what form any application should take, publicity surrounding registration, remedies against malpractice and a whole host of other questions.

Landownership in Scotland is based on satisfying two conditions – that you have a recorded title to the land and that you have possession of it. It is based upon two acts of 1617, the Act XVI,  Act of Registration (which established the Register of Sasines) and the Act XII, Act of Prescription (which established that provided one had a recorded title, possession for 40 years would exempt any such title from challenge provided the owner had occupied it peaceably, openly and without judicial interruption. The Sasines register has undergone minor technical revision but remains substantially as conceived in 1617. Likewise, prescription has only undergone minor statutory amendment since 1617 reducing the prescriptive period to 10 years (20 years if it is Crown land).

These laws continue to underpinning modern property law but, as I outline in my recent book, The Poor Had No Lawyers, often represent little more than a form of post hoc legitimised theft which, were it to involve ordinary criminal theft would have the party doing the thieving in the dock for criminal reset.

The policy objectives of the bill are narrowly focused and reflect the limited “law review” nature of the bill. Now is the perfect time for the Scottish Government to – yes, review and improve the 1979 statute which is urgently needed – but also to provide some leadership on wider questions of what and what is not desirable from a public policy point of view in terms of Scotland’s system of land registration.

In my next three blogs I will deal with three of these – the legitimacy of a non domino titles, the registration of common land and the disclosure of beneficial ownership.

Meanwhile, the Economy, Energy and Tourism Committee of the Scottish Parliament are seeking evidence by 18 January s part of their Stage One scrutiny of the Bill. Please do write to them if you feel inclined.