A Leonardo da Vinci painting, a Country Park and a secrecy jurisdiction – the offshore interests of the Scott family. 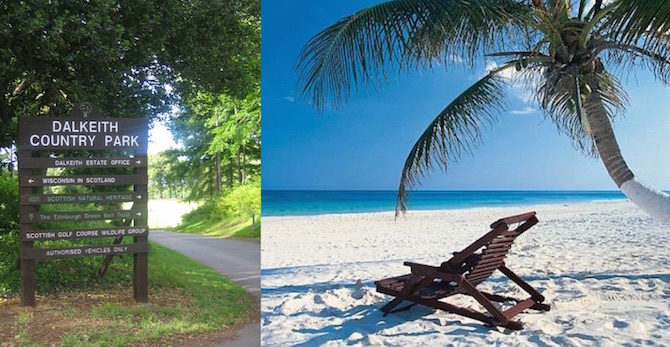 by Andy Wightman and Carole Ross

Mr Richard Scott (sometimes referred to as the Duke of Buccleuch) is frequently cited as the owner of the largest extent of private land in the United Kingdom. Yet, this has never been entirely accurate. The 242,000 acres of land in Scotland is owned not by Mr Scott, but mainly by a company called Buccleuch Estates Ltd.

The shares in Buccleuch Estates Ltd. are not owned by Mr Scott and his family but by two companies – Anderson Strathern Nominees Ltd and MDS Estates Ltd.

MS Estates Ltd. is wholly owned by Anderson Strathern Nominees Ltd. though the Directors include Mr Scott and other family members

Anderson Strathern Nominees Ltd. is ….. (but you know this).

So the ultimate owner of Buccluech Estates Ltd are 53 solicitors?

Well, not quite. Because what the Nominees do is to act on behalf of persons unknown on their behalf. These persons are likely to be members of the Scott family but we can’t know because the arrangements are not made public.

The first inkling I ever got that there was something odd about Buccleuch’s arrangements was 20 years ago in 1995. I was helping Philip Beresford compile the Sunday Times Rich List and he faxed me a copy of a letter he had received from Richard Scott’s father.

Much as I would like to be No. 33 in your chart of the richest 500, I fear I am there under false pretences.

As you rightly mention the calculation is based upon a hypothetical valuation of works of art. What you may not realise is that if I were to sell items in the collection, 80% of the proceeds would go straight to the Treasury. This is because 80% was the rate applicable to my father’s estate when he died in 1973.

My worth on that score should therefore be reduced from £200m to £40m and as I own no shares in Buccleuch Estates Ltd., I might find myself level-pegging with Gordon Baxter and Sean Connery.

Can you please take this into account next time?

In recent years the top rate of inheritance tax was reduced to 40% but even this would affect the positioning of many others whose worth is based upon art collections.

Two things stood out in this letter which would later become of interest. Buccleuch’s art works were the subject of a heritage tax exemption (meaning that the public could have access at certain times in exchange for a deferral of inheritance tax) and that Buccleuch, despite being regarded as the owner of Buccleuch Estates, admits that he owned no shares in the company.

A few years later and at his request, I had a private meeting with a senior adviser to Buccleuch. In exchange for some intelligence he wanted on the likely impact of land reform, I requested information on who really owns Buccleuch Estates. I was told that it was controlled “by the family”, that there were “firewalls” between different parts of the business and that there were “offshore interests”.

Some years passed and my file on the topic lay dormant until in 2003 when the Leonardo da Vinci painting, the Madonna of the Yarnwinder was stolen from Drumlanrig Castle. Given the 80% inheritance liability that was due, I wondered what would happen in the event that the painting was never recovered. In 2007, the painting was recovered and is now on loan to the National Galleries of Scotland.

One thing that did happen was that the ownership of the painting changed hands shortly after the theft and was transferred to a charity, The Buccleuch Heritage Trust by a Deed of Gift on 16 April 2004.

My understanding is that the £749,692 that was loaned to the Trust in around 2004 was to enable this buy back agreement. The loan was fully paid off in 2012.

The loan to the trust was from a company called Pentland Ltd and the 2011 accounts note that Richard Scott, who is a Trustee of the charity, is also a Director of Pentland Ltd.

And so to the substance of this blog. Who is Pentland Ltd.?

There is only one company called Pentland Ltd. registered in the UK and it is a wholly-owned subsidiary of Galliford Try, a UK construction company that has nothing to do with the Scott family.

Until recently, Pentland Ltd. had no direct links to the Buccleuch Group (the very complex network of companies controlled by Buccleuch Estates Ltd.). Instead it was part of a quite separate (and just as complex) network of companies controlled by the Scott family. Pentland was incorporated in Grand Cayman in 1990. By 2009, it had become a subsidiary of Dabton Investments Ltd. and in 2013, Dabton was acquired by Tarras Park Properties Ltd., a subsidiary of Buccleuch Estates Ltd.

An investigation into the myriad companies associated with Pentland prior to 2013 reveals a series of loans from Pentland Ltd. to other companies in the Buccleuch Group. Some of these loans were repaid in full or in part and others were written off in full or part. Some details are provided in this  dossier.

Lending money to UK companies from companies registered in secrecy jurisdictions is one method of bringing offshore money onshore. Writing off such loans means that the money is never repaid.

Being 100% owned by the Buccleuch Group, loans and other related party transactions are now exempt from disclosure under Financial Reporting Standard 8 on Related Party Disclosures. It is thus no longer possible to identify the loans being made by Pentland Ltd. to other companies in the Buccleuch Group.

Given that Buccleuch Estate Ltd. is itself ultimately owned by a nominee company of solicitors, is Pentland Ltd. one of the offshore family trusts I was told about in the late 1990s? 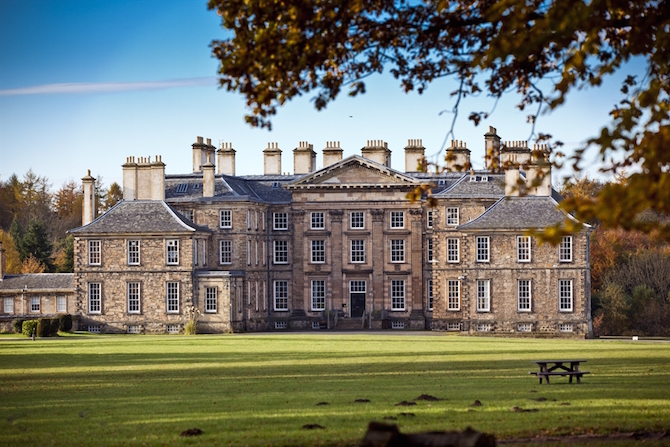 Dalkeith Country Park is popularly assumed to be owned by Buccleuch Estates Ltd. But as we have already seen Dalkeith House and surrounding grounds are owned by The Buccleuch Living Heritage Trust.

The ownership of the majority of the rest of the Country Park and neighbouring land was revealed in correspondence entered into between Buccleuch Group, Anderson Strathern and the Registers of Scotland in relation to the registration of an agricultural tenant’s interest to buy their farm under Part 2 of the Agricultural Holdings (Scotland) Act 2003.

The eastern part of the Country Park is occupied by a tenant of the Home Farm and a further agricultural tenancy exists over Smeaton Farm on the Park’s eastern border, just outside the park

Half of Smeaton Farm was owned in the past by Pentland Ltd. but by 2012, it had transferred its ownership to a company called Hayes One Ltd., Clifton House, 75 Fort Street, PO Box 1350, Grand Cayman, KY1-1108, Cayman Islands.

In correspondence relating to the Home Farm and Smeaton Farm in 2007, Registers of Scotland asked Buccleuch whether Pentland Ltd and Buccleuch Estates Ltd. “were connected  in any way for example with the same beneficial share ownership and whether the tenant did receive notification of the change of ownership and when this took place.”

In reply, Anderson Strathern wrote to RoS to state that ownership of the Home Farm had transferred from Pentland Ltd to Buccleuch Estates Ltd. on 26 November 2002 and this information had not been intimated to the tenant. The letter said nothing about beneficial ownership, merely that “Pentland Ltd is registered in the Cayman Islands and is not part of the Buccleuch Group.”

A search in the Register of Sasines and Land Register for “Pentland Ltd.” in Midlothian returned no results.

In an article in the Sunday Times on 21 July 2013, John Glen, Chief Executive of Buccleuch Estates Ltd. said,

“It’s my job to run the Buccleuch companies and I can assure anyone that Buccleuch businesses pay tax where they fall due. All trusts linked with Buccleuch are subject to UK tax and all other family-related trusts are resident in the UK and subject to UK tax.”

It is not clear whether this statement covers the activities of Pentland Ltd., Salters Land Ltd., Drumcork Ltd. and One Hayes Ltd.

In a statement issued yesterday, a spokesman for Buccleuch said:

“All profits arising in Pentland Limited are subject to UK corporation tax. Pentland Limited has historically owned land in the UK and currently owns an area of land near Canonbie in Dumfries and Galloway.”

In the Land Reform (Scotland) Bill debate on Wednesday this week, Patrick Harvie MSP has tabled two amendments that would bar all legal entities registered in British Overseas Territories or Crown Dependencies from registering title to land in Scotland (Amendments 105 & 106 pages 11 & 12).

This is merely the latest in a long series of attempts in Parliament to crack down on offshore ownership. At First Minister’s Questions on 9 October 2003, Jack McConnell responded to a question from Stewart Stevenson MSP on the topic and concluded that “I am sure that the matter will be discussed in Parliament over a long period.

In 2012, in response to further attempts to amend the Land Registration (Scotland) Bill in 2012, Fergus Ewing MSP, responded to concerns raised by the Economy, Energy and Tourism Committee, by saying that nothing could or would be done. In a meeting with the Minister at the time, I specifically raised the question of the use of secrecy jurisdictions by landowners like Buccleuch. Barely able to disguise his contempt for me, he said that he had visited Buccleuch and that the company had created lots of jobs. On Wednesday, Parliament will once again debate the matter after months of pressure from campaigners for greater openness.

Meanwhile, despite what we have discovered here, we are no closer to being able to determine for sure the real owner of Buccleuch Estates Ltd.

See the story with further comment in The National by Commonspace journalist, Michael Gray and a summary of this blog here.