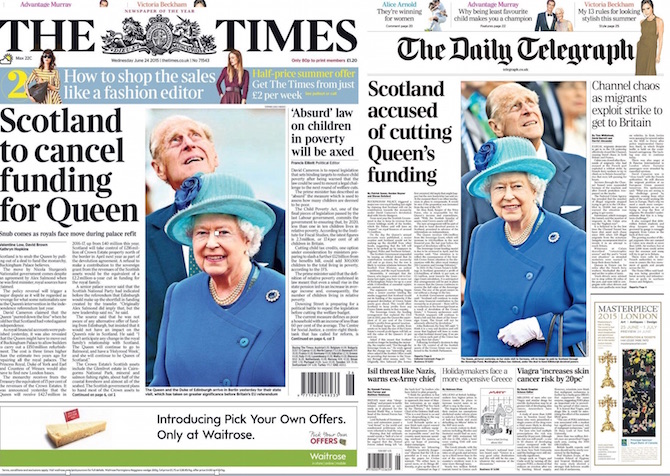 There is a lot of complete nonsense being spun in the media today about the alleged refusal of Scotland to contribute to the financial support of the Royal family. Front page splashes on the Times and the Telegraph has been gleefully picked up by broadcasters and others. The population  has now been led to believe that Nicola Sturgeon and the Scottish Government are somehow snubbing the Queen and refusing to pay a fair share of the costs of maintaining her in the style to which she is accustomed,

We have been here before.

Last December, the journalist Hamish Macdonnell spun stories in the Daily Mail and the Spectator. I debunked them here.

So what are the facts?

The Royal Family is financed by through a Sovereign Grant established under the Sovereign Grant Act 2011. Section 1 of the Act provides that the Grant is paid by the Treasury each year from funds voted by Parliament (the UK Parliament).

The Scottish Government has no responsibility whatsoever to provide any funding for the Royal Family since it is a reserved matter. Scottish taxpayers pay towards the Sovereign Grant in the same way as they contribute to all areas of reserved expenditure.

The sum of money comprising the Grant is calculated by reference to the net surplus revenue paid to the Treasury by the Crown Estate Commissioners. The first step in the calculation (Section 6 of the Act) is to calculate 15% of the revenue in the financial year two years prior.

I suggested at the time the Bill was rushed through Parliament (see here and here) that the profits of the Stilton cheese industry might be a candidate. Ian Davidson MP suggested GDP. George Osborne himself said “I completely accept that I could have brought other mechanisms before the House, but the Crown Estate is a large commercial property company that is run in a pretty conservative way. It is not a bad proxy for how the country and the economy are doing.”

With the proposed devolution of the management and revenues of the Crown Estate in Scotland the net profits remitted to the Treasury will shrink slighty from any given base and thus the 15% will reduce very slightly (Scotland only contributes around 3% of the net revenue).

The UK Parliament and the Treasury are free at any time to alter the formula and the Smith Commission recognised that it might be necessary. Indeed, a statutory review is due in April 2016. The problem they have at the moment is in fact that the Sovereign grant has grown faster than expected due to the London property market and George Osborne and the Royal Trustees are busy negotiating a reduction in the Grant.

The Palace official who briefed the media would, in a more distant age, probably have been taken out and shot. Quite why the Palace wants to pick an entirely unfounded and counter-productive attack on the Scottish Government is not clear.

Meanwhile, confusion reigns at precisely the moment when, with the Scotland Bill being debate in Parliament, we need calm negotiation.

Buckingham Palace has released a statement as follows.

“Sir Alan Reid Keeper of the Privy Purse said today: “Yesterday’s media briefing on the Sovereign Grant report 2014-15 was intended to highlight some of the issues that may arise when the first review of the Sovereign Grant begins in April next year. The comments and observations were about a principle and never intended to be a criticism of Scotland or of the First Minister or to suggest that the First Minister had cast doubt on the continued funding of the Monarchy.

The principle is about what happens if profits from certain Crown Estate assets, such as those in Scotland, are not paid to the Treasury and the impact that may have on the calculation of the Sovereign Grant in future years. This question will form part of next year’s review.

As we made clear at the briefing, Scotland contributes in many ways to the Treasury’s consolidated fund – out of which the Sovereign Grant is paid. We said explicitly that to imply Scotland would not pay for the Monarchy was simply wrong and we accept unreservedly the assurances of the Scottish Government that the Sovereign Grant will not be cut as a result of devolution of the Crown Estate.”