This blog is long overdue (as indeed are many) but I understand that the City of Edinburgh Council’s Audit Committee will shortly be considering a report into the Parliament House fiasco. It is therefore appropriate to publish this second update on the affair. The original story is here and Update 1 is here).

In summary, Parliament Hall forms part of the common good of the City of Edinburgh but, through a series of apparent blunders, title was granted to Scottish Ministers in 2005 (see the original story for full background). In 2010, Fergus Ewing, Minister for Business, Energy and Tourism signed the Transfer of Property etc. (Scottish Court Service) Order which vests the property in the hands of the Scottish Courts Service.

On 19 February 2015, four days after the story broke, Alison Johnstone MSP asked the First Minister whether the Scottish Government would co-operate in resolving the matter (see above video clip and Official report pg 16 here). Alison Johnstone then wrote to the Scottish Government and received a reply. At the same time a Freedom of Information request revealed other elements of the story. These are outlined in what follows.

I do not find this a credible explanation. Acts of this sort are passed by Parliament to transfer the ownership of property from one public body to another. The 2010 Order mentioned above is a contemporary example of such legislation. Such Acts cannot lawfully transfer land or property owned by third parties (which includes land owned by local authorities such as the Royal Burgh and Corporation of Edinburgh.

As noted in the original blog, Parliament House is a building about which much is known. The City accounts of 1875-76 place on record the Council’s ownership of the building. A comprehensive report of 1895 on the Municipal Buildings of the City does the same. And the comprehensive asset survey by the Town Clerk and City Chamberlain in 1905 (Report of the Common Good of the City of Edinburgh by Hunter & Paton) re-iterates the Council’s ownership.

It is inconceivable that theses officers of the Corporation could be recording the ownership of this building in 1875, 1905 and 1925 if, as argued by Scottish Ministers today, ownership of the property had been transferred by an Act of Parliament in 1852. Had the 1852 Act transferred ownership, the Council would know all about it. But the Act did not do this because such Acts cannot ( in the absence of a court order or other legal means of acquisition) transfer the ownership of property that is not already in the ownership of a public body accountable to Parliament.

The Council appears to have made contact with Scottish Ministers as far back as 6 June 2014 in a letter outlining its concerns (see here). 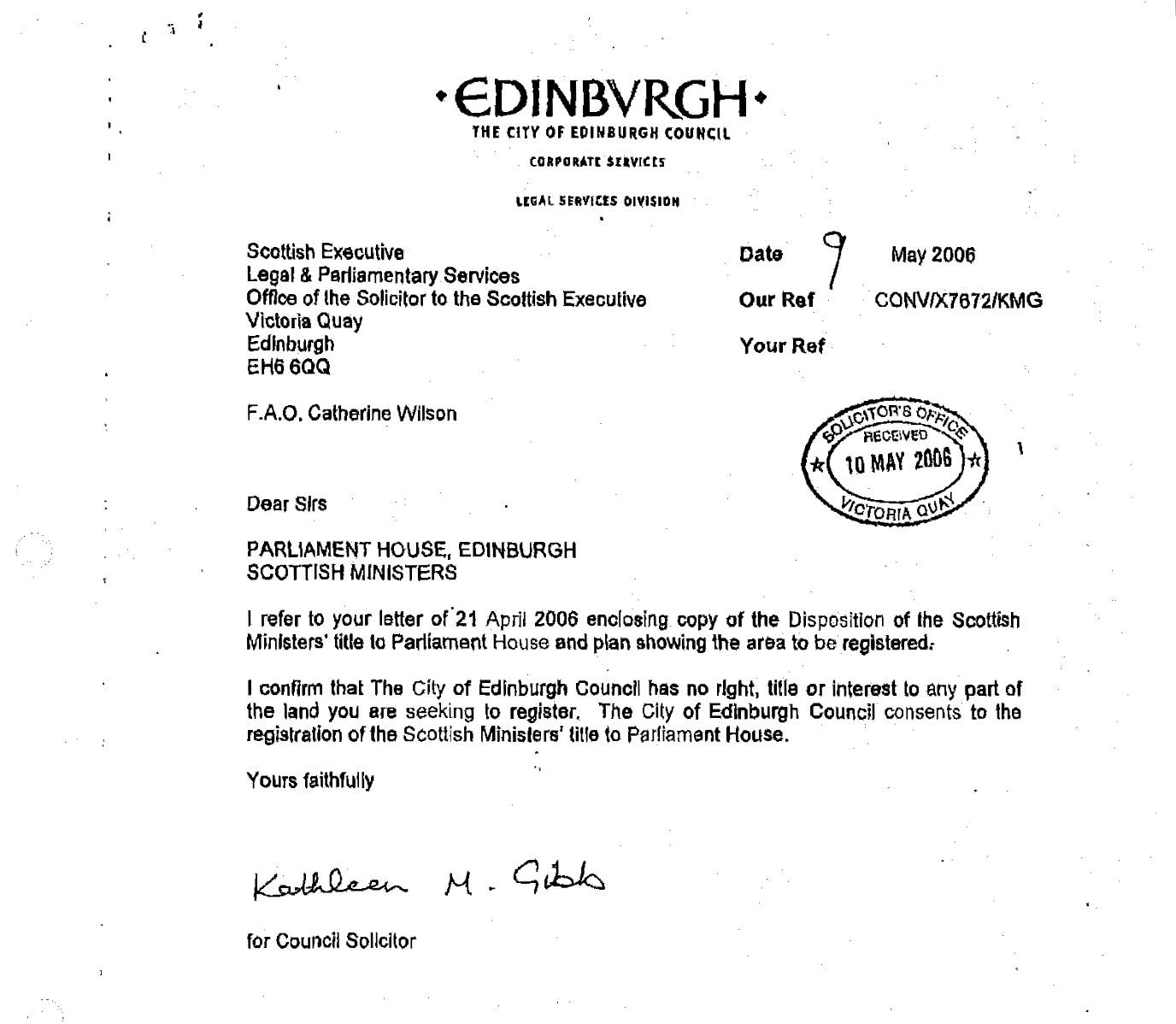 Finally, I have obtained a fax from the Faculty of Advocates dated 19 June 1997 that claims that the Laigh Hall (which used to store the Maiden, the gallows and the City lamps) had come into the ownership of the Faculty from the Town in exchange for properties to the north of the Signet Library. There is no evidence that this claim has any foundation in fact.

Whether the City of Edinburgh Council will be able to recover ownership of Parliament Hall is yet to be determined. The most interesting revelation from the above is the assertion by Scottish Ministers that the 1852 Act was the basis upon which they proceeded to assert their title. I think this view is flawed.

The City of Edinburgh Council’s Audit Committee meets on 18 June.