Community Ownership in the Highlands & Islands 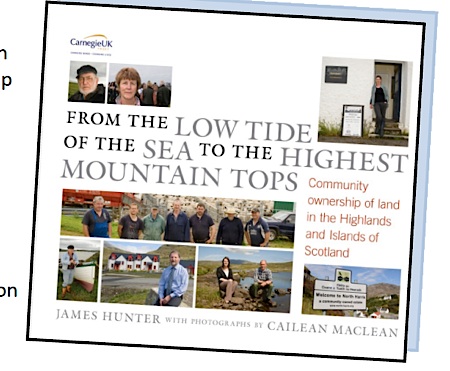 One of the first serious books I ever read (my 1982 John Donald hardback edition sits on the shelf beside me) was James Hunter’s The Making of the Crofting Community. It is a mark of Hunter’s brilliance that his PhD thesis not only broke new historiographical ground but was at the same time a gripping read. It remains in print, now with an extended preface exploring the controversy the book stirred up in the academic community.

Jim has gone on to write many other good books but his latest may well be destined to join the Crofting Community among his classic works. From the Low Tide of the Sea to the Highest Mountain Tops charts the remarkable story of how more than half a million acres of land has come into community ownership in the Highlands and Islands in the past 20 years. A flier is available here or order online here. An excellent essay by Hunter was published in the Sunday Herald of 11 March 2012.

This week sees the 10th anniversary of the community buyout on Gigha as well as the annual conference of Community Land Scotland. On Friday, the subject of crofting is explored in The Claim of Crofting – a series of celebratory musical, theatrical and poetic form at Sabhal Mor Ostaig on Skye.

I hope to blog at greater length on where we are with this particular element of land reform. Meanwhile, do buy the book. You won’t be disappointed.