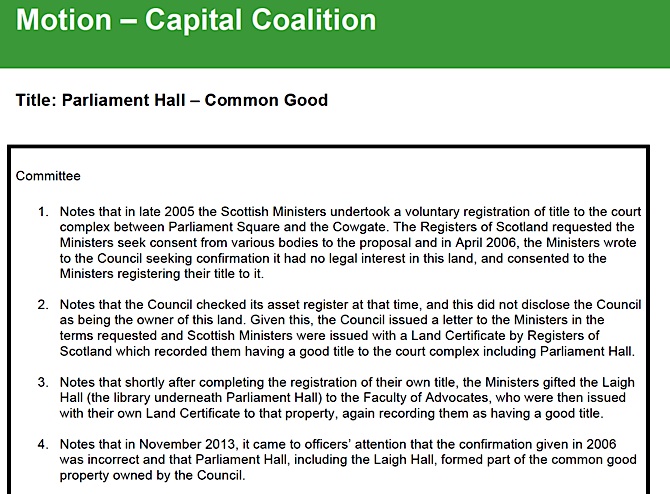 The latest developments in the story of Parliament House (see previous blog) are as follows.

Scottish Green Party Councillor Gavin Corbett has had meetings with senior officials in the Council and shares his thoughts here.

The Leader and Deputy Leader of the Council (Andrew Burns and Steve Cardownie) have tabled an urgent motion for the Corporate Policy and Strategy Committee on 24 February 2015. It will require to be ruled urgent by the Convener if it is to be considered. The full text can be read here. it concludes by recommending that the Chief Executive of the COuncil writes to the Scottish Government Permanent Secretary to seek a voluntary resolution of the issue.

There is quite a bit of interest in this motion.

Under item 5, the Committee is invited to note that in June 2008 it was resolved that a review of common good would only be carried out if and when property was being sold. The motion omits to mention, however, that the question of Parliament House had already been raised in my report of April 2006 in which I asserted that Parliament House should have been included in a list of common good assets that had been supplied to me in 2005. The Council’s responded by preparing a Review of the Common Good for a meeting of the Resource Management and Audit Scrutiny Committee on 12 October 2006 in which, under the heading “Parliament House/The Old Royal High School”, it said nothing about Parliament House but narrated the history of the High School (click here for relevant extract).

I replied in a further paper here in which I argued that,

Parliament House was ascertained by Hunter and Paton to form part of the Common Good in 1905 (p.31). I know of nothing that has happened since then that would have removed it from the Common Good but perhaps it has. If so, it would be useful to have the information.”

The 12 October 2006 Review, however, was withdrawn and never tabled. As I wrote at the time,

As of today (25 November 2006) I do not know the answer to this question. Hopefully I will know soon.”

I never did find out. But in December, a paper was tabled at the Executive of the Council which says nothing about the investigations reported in the October 2006 review. Then in January 2008, a further Review was published which this time contained exactly the same wording under the heading “Parliament House/The Old Royal High School” and said precisely nothing about Parliament House.

We now know from item 1 in the motion tabled today that the Council knew in April 2006 that Parliament House (in its mistaken view) did not form part of the common good and was not owned by the City. My report was tabled in April 2006 So why, in 2006 and 2008, did the Council not divulge that Parliament House was not (in its view) owned by the City and, instead, stay silent on the matter? DId they know and rather not admit it?

Given that Scottish Ministers had no prior title to Parliament House, it would have been normal practice for the Keeper of the Registers of Scotland to have withheld indemnity for that part. In other words, the Keeper would say, “maybe you (Scottish Ministers) do indeed own it but I am not satisfied that there is sufficient evidence“. The state guarantee granted in the Land Register would have been withheld and the title would have been open to challenge by the true owner (City of Edinburgh Council) for ten years i.e. until November 2015.

Why did the Keeper not withhold indemnity? I asked the Registers of Scotland this question today and they provided the following statement.

“When the first registration application was presented the Keeper undertook a detailed examination of the prior titles. As one might expect with such property the Sasine titles were mostly old and contained fairly vague common law descriptions. Notwithstanding the evidence of title that was presented in support of Scottish Ministers, we sought additional assurances in respect of a small number of other bodies who may also have been able to demonstrate an interest to the area in question – this enquiry reflected the historic nature of the evidence of title that was presented. That included Edinburgh City Council. We asked Scottish Ministers, as applicant, to confirm the position in relation to these other bodies. All of the bodies identified confirmed they had no right title or interest to the area in question. Accordingly, we considered an exclusion of indemnity was not required.”

That’s all for now.