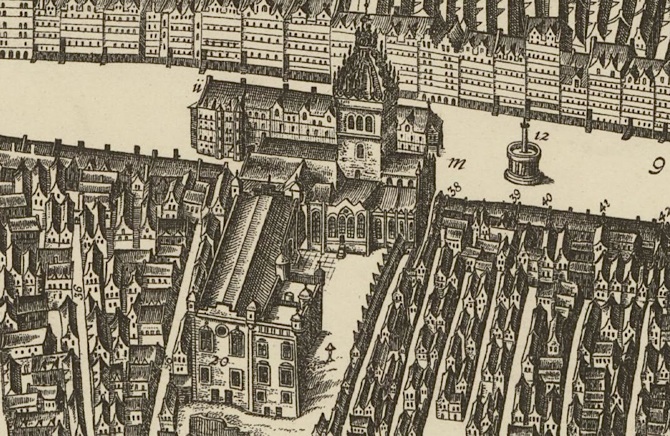 Regular readers of this blog will be familiar with the subject of common good land. This is land and property in the Burghs of Scotland that is the historic property of the burgh held on behalf of the citizens. (1) This blog has reported on many cases of maladministration of these assets where Councils have been sloppy in their record-keeping and where the interests of the citizen has been poorly served by the Councils that replaced the Town Councils in 1975.

But Scotland’s four ancient cities do not have any real excuse. Unlike Kirkcaldy or Hawick, Glasgow, Edinburgh, Dundee and Aberdeen have enjoyed continuity in having always had a council governing the affairs of the city. So one might expect them to have a good idea of what properties they hold as part of the common good. Which makes this tale of unmitigated incompetence just that little bit more shocking.

As revealed in the Evening News today, the City of Edinburgh Council has lost the ownership of one of the handful of the most historic properties in the City. It didn’t sell it by accident in some fearful and misguided property deal. It didn’t even know that it no longer owned it. It just realised one day that something had gone very horribly wrong. Quite why remains unclear since the history of the building is very well documented in the Council’s own records.

The building is Parliament House which sits largely hidden from view behind the High Kirk of St. Giles and can be glimpsed from George IV Bridge just north of the National Library of Scotland. The history of the building is recounted in great detail in “The Municipal Buildings of Edinburgh – A sketch of their history for seven hundred years written mainly from the original records”, a book commissioned by the Town Council in 1895 and written by Robert Miller, the Lord Dean of Guild. The actual construction is recounted over 79 pages in “The Book of the Old Edinburgh Club”, Volume 13, 1924. This is a building about which a great deal is known. 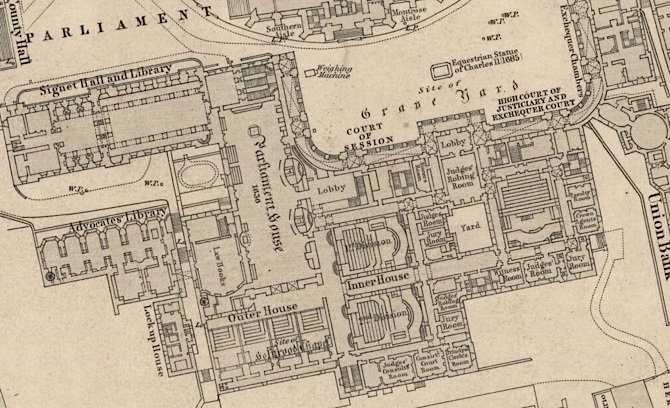 Image: Ordnance Survey 1852 Reproduced with the permission of the National Library of Scotland.

In the 16th century the Scots Parliament had no fixed abode and sat in Perth, Linlithgow, Stirling and Aberdeen as well as in Edinburgh. (2) In 1632 Charles I requested the Town Council build a new home for the Parliament and construction extended from 6 April 1632 to 11 November 1640. (Update – see comment from Alan MacDonald to effect that this is not so and that the Town Council took their own initiative. My source for this was Historical Monuments Commission). The land upon which Parliament House sits was part of the old churchyard of St Giles which was gifted to the Town Council in a Charter by Queen Mary in 1566.

The total cost of construction was £10,554,17s,7d. with 64% of the funds paid out of the common good fund and the remainder raised by public subscription from the citizens of Edinburgh. (3) The buildings were to be occupied rent free by the parliament of Scotland and the College of Justice. The Town Council paid for the upkeep of the building and for nearly two centuries Parliament House was the public hall of the city hosting civic receptions and even musical festivals. The Edinburgh Festival of 1815, 1819 and 1824 witnessed concerts of Haydn’s Creation and Handel’s Messiah.

In 1816, the Town Council handed over responsibility for the upkeep of the building to the Exchequer since the Courts of Law made almost exclusive use of it. The most recent known civic use of the building was for a reception on the occasion of the state visit of the King of Norway in 1962.

In 2004, work began on a plan to redevelop the Court of Session including Parliament House which was by now under the day-to-day administration of the Scottish Courts Service. The £60 million project was completed in 2013. In order to expedite the project, Scottish Ministers decided to record a title to the complex of buildings by way of a voluntary registration in the Land Register.

The Keeper of the Register of Scotland was not satisfied that Scottish Ministers had any evidence of ownership and so advised them to contact Edinburgh Council who, it was thought, was the true owner. The question was put to the Council who apparently confirmed to the Scottish Government that the it had no right, title or interest in Parliament House. The title was then registered in the name of Scottish Ministers. 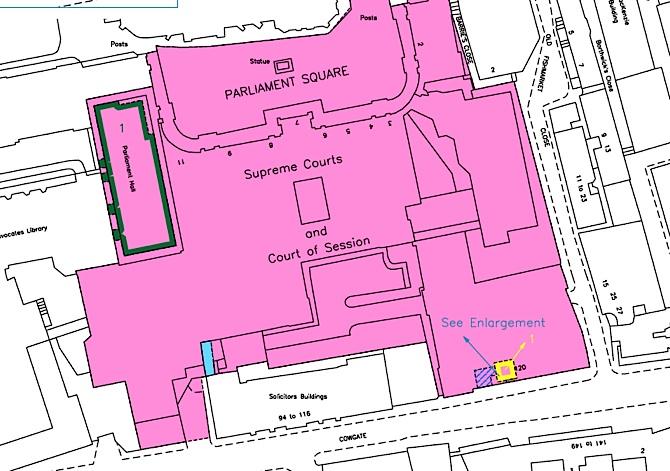 Thus did the Council lose ownership of one of the most historic buildings in the City – a national Parliament in the capital city of an ancient European nation and a building constructed on common good land and funded by the common good fund and members of the public.

But stranger things were then to follow. The Faculty of Advocates has for centuries regarded Parliament House as theirs. They had almost exclusive use of it and so, by means as yet unclear, within a month of Scottish Ministers taking ownership, the Faculty persuaded Scottish Ministers to convey to its ownership for no consideration the room known as the Laigh Hall within Parliament House. The subjects are a bit odd comprising “the room on the lower floor shown edged red on the title plan (said subjects extending only to the inner surfaces of the walls, floor and ceiling thereof)”. The use is restricted to a library and study area for members of the Faculty of Advocates and for associated seminars and exhibitions. Scottish Ministers retain a right of pre-emption should the Faculty ever choose to sell this historic block of fresh air. 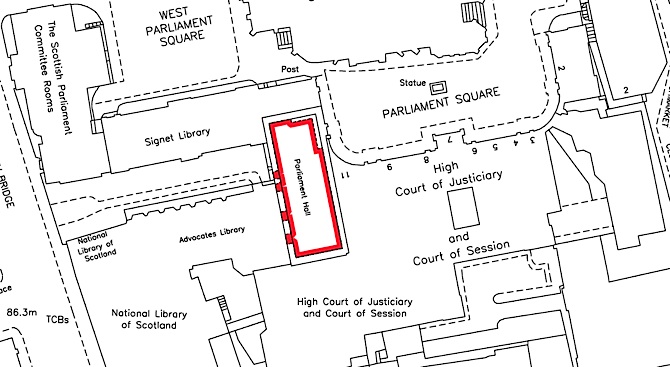 Why did this happen?

On what basis did the Council claim to have no interest?

The Council’s records demonstrate quite clearly that Parliament House belongs to the City.

The Council has good records of ownership

As noted by Miller in 1895, the accounts of the city 1875-76 puts on record the City’s ownership of Parliament House which had been built by the City on land owned by the City and formed part of the common good of the City. It noted that, despite the day-to-day management being in the hands of the Courts, “ownership had never been forgotten but there had not arisen any necessity to assert it.”

In the famous Report of the Common Good of the City of Edinburgh by Thomas Hunter (Town Clerk) and Robert Paton (City Chamberlain) published along with a beautiful map in 1905, it is recorded that “The large hall with certain portions around it, still belongs in property to the Corporation. The rooms underneath the large hall appear to have been handed over by the Corporation for the use of the Advocates’ Library”.

Concerned about the state of the common good in the city, in April 2006, I wrote a Report on the Common Good of the City of Edinburgh and submitted it to the scrutiny committee of the council. In it, I noted a number of properties that had been missed from the 2005 list of common good assets that had been supplied to me by the Council. These included The Meadows and Parliament House.

The Council responded in October 2006 with a Review of the Common Good in Edinburgh. It appeared to confuse Parliament House with the Old Royal High School and, uniquely among the properties being discussed, failed to address the question of Parliament House’s history. (4) I now suspect why it did this. – it was aware of the  inadvertent ceding of ownership to Scottish Ministers.

The Council issued a terse statement to the Evening News in response to its enquiry.

The owner of Parliament House is now, in law, Scottish Ministers and the Faculty of Advocates. Under the law as it was in 2006, the Council has no legal means of recovering ownership. The best that can be hoped is that Scottish Ministers and the Faculty agree to return the property to the Council’s ownership. The full council should then pass a resolution to the effect that the building is owned by the Council and forms part of the common good of the City.

This is a shocking display of incompetence by the Council. It begs the question whether anyone noticed it since 2006. Perhaps the author of the October 2006 Report did and chose to conceal the fact. The fiasco underlines the need for a proper register of common good properties and for an open and freely available land register so that the citizen can spot land transfers like this. (5)

I await developments with interest.

(3) See Accounts of the Treasurer for full details.

(4) The report then proceeds to confuse matters by claiming that it had been sold in 1977 when in fact, this refers to the Old Royal High School. See extract below.