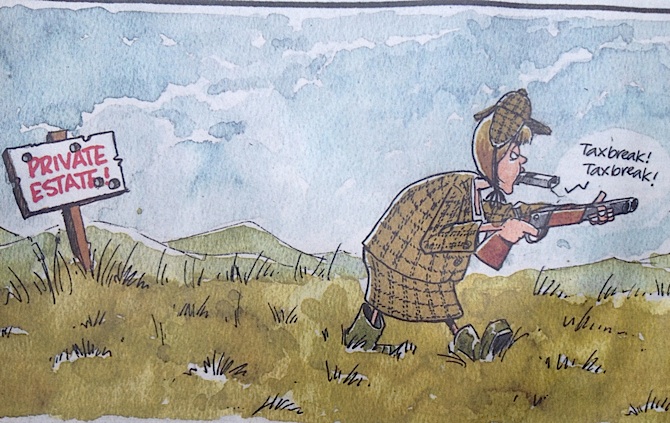 It’s been a remarkable few days.

The following day the Smith Commission published its report on further devolution for Scotland. After decades of campaigning on the topic by many activists, the Crown Estate is to be devolved in its entirety together with other powers such as the licensing of onshore oil and gas extraction.

Then, today, the Scottish Government published a consultation paper on land reform in Scotland which provides more detail on the measures that are to be incorporated in the Bill. This all amounts to the most significant political advance on the topic since the establishment of the Scottish Parliament and the series of reforms implemented in 1999-2003.

In the words of the Scottish Government,

“The aim of this paper is … to ensure you and everyone in Scotland are given the chance to influence this debate, provide your thoughts and suggestions, and to shape both Scotland’s vision for the future of land rights and responsibilities policy and future land reform.”

The Paper begins by proposing a Land Rights and Responsibilities policy statement (page 7). This in itself is very significant. It provides a draft statement of principles that will inform the development of land policy for the years ahead. One would hope that the final version will be agreed and adopted by whatever political parties are in power in Holyrood. Such a statement puts Scottish land reform firmly in an international context where land rights are seen as an important means of strengthening communities and individuals. It opens the door to the Scottish Government adopting the UN Guidelines on Responsible Governance of Tenure that have already been adopted by the UK government.

The paper then goes on to highlight some further detail on the eleven measures that are proposed to be included in the Land Reform Bill. Some of these were highlighted in the First Minister’s legislative programme last week – see previous blog  but some are new.

2. Limiting the Legal Entities that can own land in Scotland This is a new proposal and very welcome. Again it follows a recommendation of the Land Reform Review Group  and previous debates around the Land Registration Act (see my evidence here)  It also addresses the concerns of law enforcement and taxation authorities about money-laundering (1) There has been a long-standing problem of land owned by companies registered in offshore tax-havens. Some own large tracts of rural land and some own urban property – including quite a bit of Charlotte Square in Edinburgh near the First Minister’s official residence. It is quite ludicrous to permit this state of affairs to continue any longer.

3. Information on land, its value and ownership

Announced last week and implements a key recommendation of the Land Reform Review Group. We need to move towards a comprehensive and freely available system like the State of Montana.

Again, announced last week but this is the opportunity now to consider how this might be designed and implemented. As the Paper argues,

“The vast majority of land in Scotland is owned by the private sector. Landowners are instrumental in promoting sustainable local development and supporting communities. However, in some instances the scale or pattern of land ownership, and the decisions of landowners, can be a barrier to sustainable development in an area. Providing mechanisms to address such situations could allow for potential barriers to sustainable local economic and social development to be overcome.”

This is a new proposal and welcome. As the Paper notes,

“It is clear public land should be managed for the greatest overall benefit, balancing a number of differing and sometimes conflicting public needs. … However, the legal framework for some public bodies can be a significant constraint on the range of operations that they can undertake to deliver these benefits.”

If the legal framework and governance of all public land can be modernised and made more flexible, it will help to deliver many of the objectives of land reform can be met.

6. Duty of community engagement on charitable trustees when taking decisions on land management.

This was highlighted last week. What the Government propose is a new duty on the trustees of charitable bodies to “engage with the local community and consider the potential impact on the local community before taking any decision” Such a power would be useful but it does not go far enough. Where charitable status is granted to private landowners who then restrict membership of the organisation to a tight group of family and friends, what is needed is not better engagement but better democracy.

7. Removal of the exemption from business rates for shooting and deerstalking

Announced last week, the Paper makes clear that the proposal relates to the so-called sporting rates abolished in 1995. It would be helpful if the term “business rates” was done away with. It has no legal meaning and is misleading. Such rates are not a tax on businesses (mainly concerned with income tax and corporation tax), they are a levy on the rental value of non-domestic property. The Scottish Parliament is assessed for non-domestic rates (NDR) as are bus stops. Neither is a business. Much though needs to be given to how such rates are to be assessed. I will be arguing strongly that it be done on the rental value of land – an approach that the Mirrlees Review (Chapter 16) recommended should be applied to all NDR.

I particularly welcome the plans to reform the law around common good land. This is land owned by towns and cities across Scotland that is for the benefit of the residents and os often of great antiquity forming part of the original Royal Charter of the burgh. The legal framework around is complicated and out of date and leads to conflict between councils and communities. Common Good is the oldest form of community landownership and the vast majority of Scotland’s population who live in towns and cities deserve a better system of managing it.

Scottish Government confirms that the recommendations that will be made by the Agricultural Holdings Review Group (which is due to report later this month) will be incorporated into the Land Reform Bill.

This is a new proposal to strengthen the powers of intervention of Scottish Natural Heritage over the management of wild deer. As the Paper notes, wild deer are a public resource but they are managed exclusively by landowning interests. I suspect many will be arguing that the proposals need to go further and introduce a modern system of wildlife management with proper democratic governance of this public resource.

There are proposals here to make minor amendments to existing access legislation.

These proposals, together with the Community Empowerment Bill, reform of council tax, succession law reform, harbours reform and devolution of the Crown Estate and onshore oil and gas add up to a substantial package of powers that will reform land relations in Scotland. Reform is not going to happen quickly. This is the job of a decade or more but this is an important start

All of these proposals will be subject to extensive debate over the coming months and already there are powerful vested interests engaged in trying to derail them. Scottish Land and Estates issued a press release through Media House in which it expressed “disappointment that the Scottish Government continues to miss an opportunity to create modern and meaningful land reform.” I think modern and meaningful land reform is what is in fact beginning to take shape. There is a long way to go of course. But Scotland is changed now. Thousands of people were energised by the referendum campaign and now want to use the existing powers of the Scottish Parliament to secure a fairer and more prosperous country.

This blog is a brief overview of what is covered by the Consultation. I will be publishing further detailed blogs on individual topics as well as a series of briefing papers to assist people in responding to the consultation.