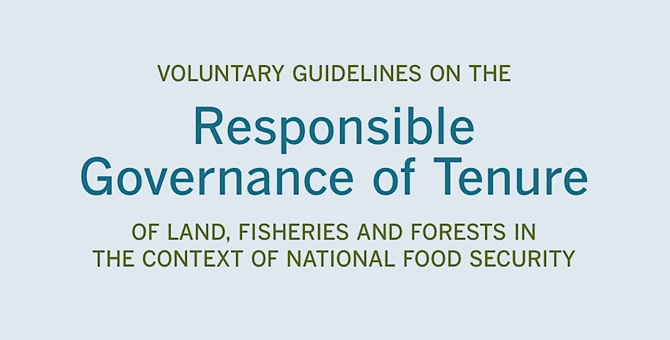 The Voluntary Guidelines on the Responsible Governance of Tenure (direct link here) were adopted on 11 May 2012 by the UN Food and Agriculture Organisation’s Committee on World Food Security following a three-year process of development by 700 delegates from 133 countries.

The Guidelines have been endorsed by Governments around the world and were most recently supported by the 2013 G8 Summit in Lough Erne and featured in Sections 43-45 of the G8 Communique. The UK Government is actively following the Guidelines in relation to its overseas development programmes as highlighted in its 2013 G8 Presidency Report (pg14). The map below shows the countries where the UK is engaged in land governance projects. See the Land Governance Programme Map for further information. 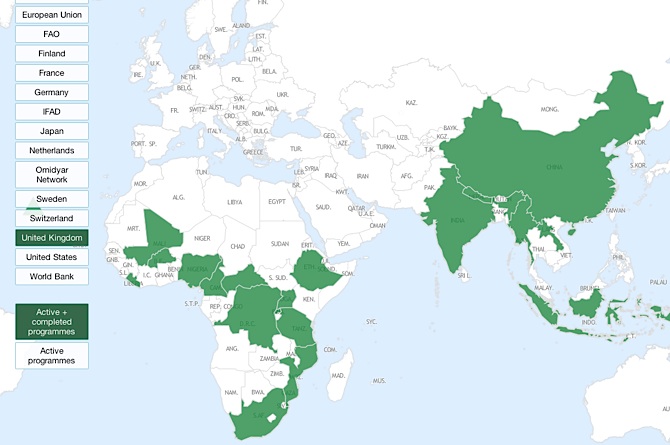 As stated in the Preface,

The purpose of these Voluntary Guidelines is to serve as a reference and to provide guidance to improve the governance of tenure of land, fisheries and forests with the overarching goal of achieving food security for all and to support the progressive realization of the right to adequate food in the context of national food security.

These Guidelines are intended to contribute to the global and national efforts towards the eradication of hunger and poverty, based on the principles of sustainable development and with the recognition of the centrality of land to development by promoting secure tenure rights and equitable access to land, fisheries and forests.

One of the most interesting thing about the Guidelines is that they are global in scope. For too long, many so-called developed countries have developed policies and guidelines which they enthusiastically promote in other countries but when asked whether such practices are adopted at home, they look sheepish. Twenty years ago I remember engaging the UK representative at a UN meeting about the millions of pounds being given to promote the transfer of control of state forests to local communities in the Highlands of Nepal when, at the same time, the Scottish Office was in open opposition to any such efforts in Scotland. So, it is welcome to read that,

Taking into consideration the national context, they may be used by all countries and regions at all stages of economic development and for the governance of all forms of tenure, including public, private, communal, collective, indigenous and customary. (2.4)

They can thus be applied to Scotland. Professor James Hunter highlighted their significance in his discussion paper for Community Land Scotland, Rights-based land reform in Scotland: Making the case in the light of International experience (see here for further info). The Guidelines form a very useful template for any tenure reform here. For example,

11.2 ……..States should take measures to prevent undesirable impacts on local communities, indigenous peoples and vulnerable groups that may arise from, inter alia, land speculation, land concentration and abuse of customary forms of tenure. States and other parties should recognize that values, such as social, cultural and environmental values, are not always well served by unregulated markets. States should protect the wider interests of societies through appropriate policies and laws on tenure.

14.1 Where appropriate, considering their national context, States should consider providing restitution for the loss of legitimate tenure rights to land, fisheries and forests. States should ensure that all actions are consistent with their existing obligations under national and international law, and with due regard to voluntary commitments under applicable regional and international instruments. 14.2 Where possible, the original parcels or holdings should be returned to those who suffered the loss, or their heirs, by resolution of the competent national authorities. Where the original parcel or holding cannot be returned, States should provide prompt and just compensation in the form of money and/or alternative parcels or holdings, ensuring equitable treatment of all affected people.

15.1 Redistributive reforms can facilitate broad and equitable access to land and inclusive rural development. In this regard, where appropriate under national contexts, States may consider allocation of public land, voluntary and market based mechanisms as well as expropriation of private land, fisheries or forests for a public purpose.

15.2 States may consider land ceilings as a policy option in the context of implementing redistributive reforms.

15.3 In the national context and in accordance with national law and legislation, redistributive reforms may be considered for social, economic and environmental reasons, among others, where a high degree of ownership concentration is combined with a significant level of rural poverty attributable to lack of access to land, fisheries and forests respecting, in line with the provisions of Section 15, the rights of all legitimate tenure holders. Redistributive reforms should guarantee equal access of men and women to land, fisheries and forests.

I look forward to seeing what the Land Reform Review Group (due to publish its findings next week) makes of this important international agreement and whether the Scottish Government intends to join the long list of administrations committed to putting the Guidelines into practice.