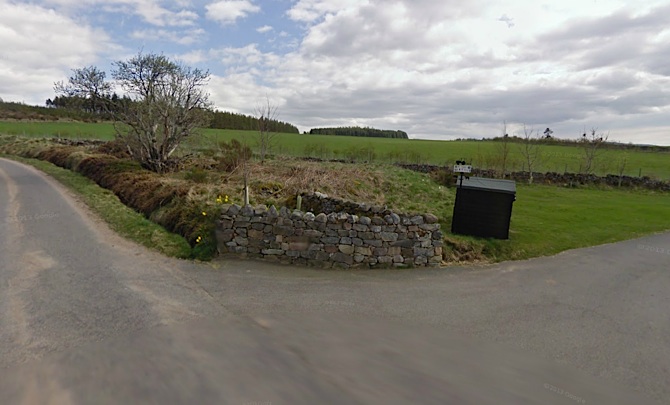 Image: The unassuming entrance to the HQ of the UK’s largest farm

The largest farm in the UK is popularly understood to be that owned by the Co-operative Group which extends to 17,808 acres across the country and is currently up for sale. However, figures released by the Scottish Government show that, in fact a north-east farmer, Frank A Smart is now far and away the largest farmer in the whole of the UK. In 2013, Mr Smart was farming 87,423 acres of land across Scotland – almost five times more than the Co-operative Group. For his efforts, he was paid £3,226,492 by the Scottish Government. His company’s accounts record a profit of £552,655 for the year ending 30 September 2012.

Mr Smart is the King of the Slipper Farmers. By buying “entitlements” to farm subsidies of thousands of pounds per hectare and claiming these on the basis of bogs and mountains rented at around £5 per acre – “naked acres”, he has abused the system of farm subsidies and become a millionaire.

According to the farming journalist Andrew Arbuckle, slipper farming has been responsible for between £50 – £100 million of payments each year – almost 20% of the total amount of subsidy paid to Scottish agriculture. Some of Scotland’s leading charities joined in the scam – here is the National Trust for Scotland trying to explain away its own involvement in buying entitlements and leasing naked acres.

The new system of farm subsidies to be introduced in 2015 is meant to bring an end to slipper-farming by ensuring that all farmers are “active”. The definition of this is yet to be finalised, however, and it is far from clear whether this will be effective in eliminating this abuse. Matters are further complicated by uncertainty over whether the new system will be introduced in 2015 as a fresh start or whether it will be phased in over a number of years. The latter approach may well allow slipper farmers like Frank Smart to continue receiving millions of pounds per year for doing probably very little at all. Moreover, it would be a slap in the face to those many farmers across Scotland for whom, because the current system was designed to benefit those farming in 2003, have been running their businesses with no subsidy whatsoever

Last week, the Rural Affairs, Climate Change and Environment Committee wrote to Richard Lochhead and argued that an immediate move to the new system may have a “negative impact on Scotland’s agriculture sector which could have serious and economic and social impacts.” It argues this position on the ludicrous proposition that “some businesses”, despite having known for years that this change was going to happen, “may not be prepared”. (page 6 of the letter & Committee Inquiry page).

Sorry – but if these businesses (and, coincidentally, they are ones that seem to dominate the concerns of the National Farmers Union of Scotland) are not prepared, then that’s tough. Why should public money be paid out to to anyone on the basis of what they were given a decade ago and who has failed to prepare for change?

Apart from Scotland’s specialised farming press and a programme on Panorama broadcast in March 2012, the mainstream media has not paid much attention to this issue. One recent exception, interestingly is the New York Times which carried a story titled “In Scotland, Working both the Land and a Loophole” by Stephen Castle on 31 March 2014.

Meanwhile, the concerns of the Committee and of the Scottish Government will be evidenced by whether Mr Smart continues to receive millions of pounds of public money that should, instead, be supporting Scotland’s far more deserving active and enterprising farm businesses.