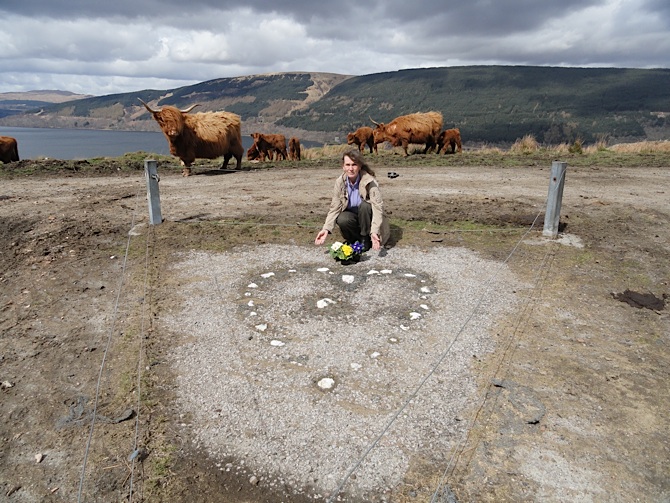 The Tinker’s Heart is a small arrangement of white quartz stones embedded in the ground at the junction between the road to Strachar (A815) and Hell’s Glen (B839) in Argyllshire.

For years it has stood as a testimony to the survival of Scotland’s Travelling people. A sacred place where couples wed, babies were christened and the dead blessed. In 1872 there is proof of two local people getting married there. There is no written evidence as to how old it is and like the oldest ballads that Burns listened to, it is all oral – no dates nor names. Reasons for the stones being placed there are associated with the Battle of Culloden and the Highland Clearances as well as the eradication of the Culture by removing children from campsites. It is sacred to my people from all over the world and needs to be  protected and restored. 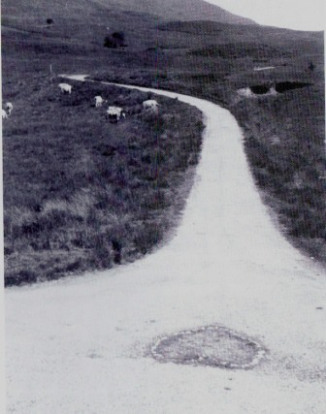 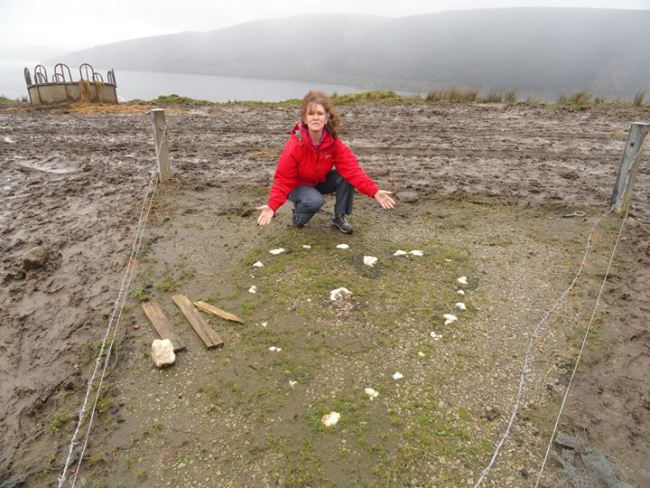 Several years ago someone told me of the sorry state of the Heart. A visit had me in tears. Highland cattle were trampling over it, a single strain of wire threaded through three metal poles was all there was to protect it (see picture above). It was dying and I had to save it.

I began by writing to the landowner Ms Kate Howe but she refused to answer. I wrote to her cousin Christina Noble but got the same response. I spent ages looking through the internet and found a very informative piece in Secret Scotland – Gypsy Wedding Place. (1)

I needed help so contacted my local MSP, Mike Russell. He was excellent and he set up a meeting with Ms Howe but was not prepared for her negativity. He’d not come across her attitude before. I presumed by his reactions that this landowner did not hold Travellers with much respect. Here is a rich landowner who owns 7048 acres of Scotland yet is not prepared to part with a few yards of old road.

Every step seemed to be getting harder. I went to visit a couple representing the landowner with Mike but got no joy there. Another meeting, this time at Argyll and Bute council headquarters with Mike Russell, Councillor Louise Glen-Lee, the Council’s tourism officer and a gentlemen from Historic Scotland, resulted in more negativity with Historic Scotland stating they would allocate funding for restoration but only with the landowners approval.

Two years moved fast the little heart was crying for help! Then out of the blue a black cage was erected over the heart (see picture below). I was pleased to see the ‘heart’ caged and safe but it looked more like a prison than the decorative stone wall and cairn I’d long visualised. While it remains in Kate Howe’s ownership it is very vulnerable. it has no legal protection and at the stroke of a pen she could develop the area, its a prime spot and I feel she just might have her  sights on such a plan. But even if she didn’t, she will in time die as will I. Who will care for the place then? 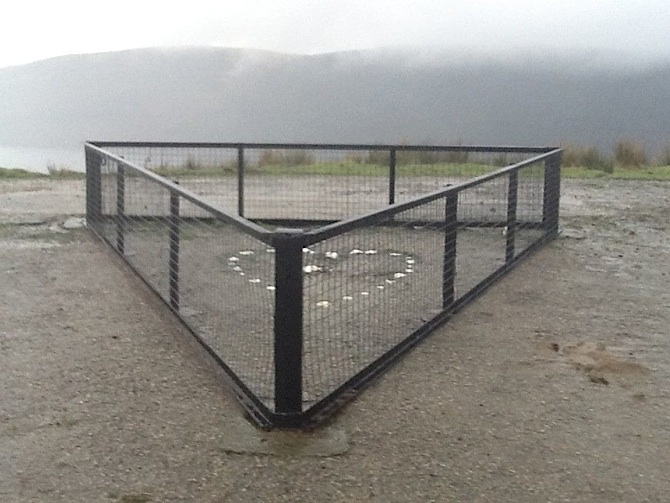 No –  this has to belong within the public domain. I contacted the Scottish Parliament to lodge a petition. Four months passed and each time I phoned the reply was “not petition material”! However Mike Russell managed to convince them of the history and importance of the site to Scotland’s culture. Just before Easter came the news that the petition will go live!!

That is how things stand today. Our ancient culture, timeline, respect and historical truths are now at this final stage and I am praying to Mother Earth to do what is right. If we are failed then Scotland’s future will be at the mercy of wind farms, shooters of our wild life, greedy strangers, land fracking and nimbys with lots of cash.

My petition “calls on the Scottish Parliament to urge the Scottish Government to direct Historic Scotland to investigate what action can be taken to ensure the restoration and preservation of the Heart of Quartz stones positioned in a field next to the A815, opposite the junction of the B839, overlooking Loch Fyne, known as the Gypsy Wedding Place, referred to locally as the Tinkers’ Heart.”

Please sign the petition. You can find further information on the petition page and at the Saving the Heart of the Travelling People facebook page. The Royal Commission on the Ancient and Historical Monuments of Scotland has a record here.