Rosal Forest up for sale again 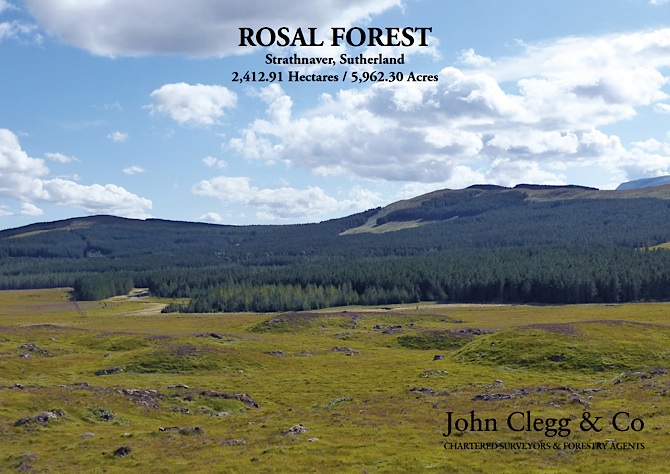 On 15 October last year, I was preparing to leave home and travel to the Isle of Skye to visit my parents for the weekend. Shortly before I left, an email arrived from John Clegg & Co. advertising for sale 6,356 acres of land owned by Scottish Ministers in Strathnaver, Sutherland at offers over £1,850,000.

Aware that 2014 is the bicentenary of the infamous Strathnaver Clearances, I was surprised to see that the sales particulars not only included one of the best-preserved Clearance Villages at Rosal but described the land as “one of the last wilderness areas of Scotland”. (1) In further banal witterings, the sales brochure went on to opine that “ruined settlements of Rosal Village in the north of the forest and Truderscaig in the south, provide a fascinating insight into the struggle for ownership of this land”

So, before leaving the house, I wrote a quick blog to express my doubts about the wisdom of this sale and the vacuousness and offensiveness  of the blurb. Within twenty-four hours, I was told that the land would be withdrawn from the market. The Environment Minister, Paul Wheelhouse had asked Forestry Commission Scotland to halt the sale and a FCS spokesperson said that “We are no reviewing options.” (see Herald report).

Today, Rosal Forest is back on the market (5.9Mb pdf brochure here and 3.7Mb plan here). 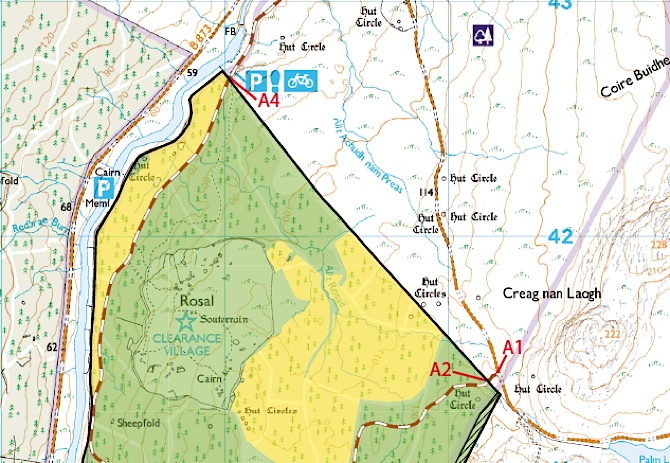 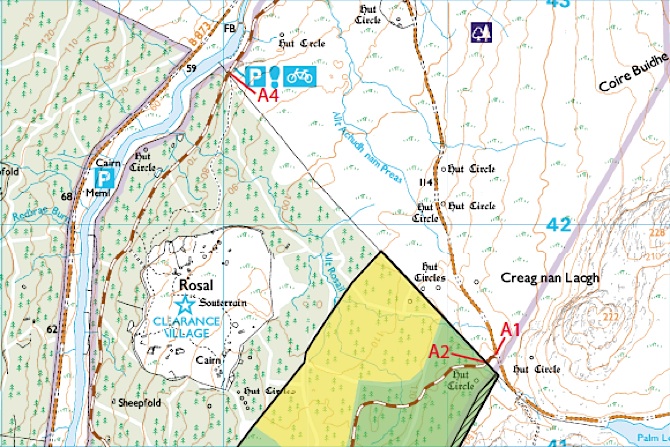 Rosal Clearance village has been removed from the sale and the nonsense about “wilderness” and “fascinating insights” has also now thankfully been omitted. A total of 5,962 acres of land is offered for sale at offers over £1.750,000. The sale forms part of the Forestry Commission’s “re-positioning” programme whereby, “subject to the approval of Ministers” land is sold and the proceeds used to invest in projects that “increase the contribution of the national forest estate to the delivery of Forestry Commission Scotland and wider Government objectives.”

Whilst this development is welcome, wider questions remain about the elite interests that continue to dominate private forestry in Scotland (see e.g.  here and here plus a research report from Feb 2012). For now at least, Scottish Ministers appear to have taken account of the historic significance of one of Scotland’s most important historical sites relating to the “ongoing struggle for ownership of this land.”

In recognition of the cultural and historic significance of Rosal clearance village, Forestry Commission Scotland is to continue managing the historically significant site as part of the National Forest Estate.

After consulting local community groups, the Commission will retain the historic village and 100 hectares surrounding it.

Working with local community groups, this will ensure the village is accessible and well interpreted as part of the wider Strathnaver Heritage Trail.

There had been plans previously to sell the whole of Rosal Forest but this was halted after concerns were raised over the future of the historic village.

The Rosal village is the remains of a once thriving Highland township, which was cleared of its inhabitants to make way for sheep back in the early 1800s.

“We have fully consulted local groups again and have now taken positive action to ensure Rosal Village is protected as part of Scotland’s National Forest Estate.

“We are now exploring ways with the local community on how we can work closer together over the promotion and management of Rosal village in the future.”

The rest of the woodland area is due to be sold as part of Forestry Commission Scotland’s ‘re-positioning programme’. Under this programme, land delivering relatively low public benefits is sold to fund the purchase of new land which can bring about wider benefits.

In this case, some of the money raised will be invested in the creation of new woodland and recreation facilities at Sibster in Caithness and the recently announced starter-farm for new farmers at Achnamoine near Halkirk.

The sale of the rest of the woodland could also provide buyers with a secure supply of timber in the north of Scotland. This could be especially attractive to companies wishing to develop bio-energy projects in the area.

Lotting of the land for sale is not practical in this case, although it is the Commission’s preferred option as a way of offering more opportunities for woodland purchase to a wider range of people.

Communities can acquire land for sale through the National Forest Land Scheme, but there has been no interest in this case following ongoing discussions with local stakeholders.

(1) For further information on the historic sites in Strathnaver, see Strathnaver Museum page.