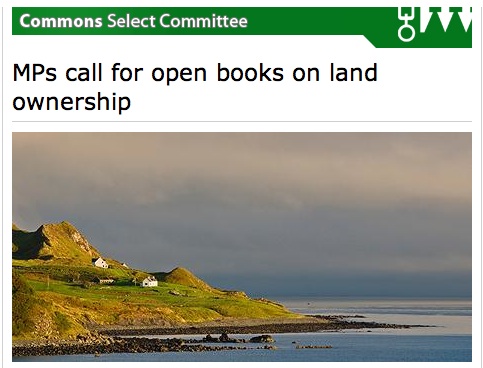 Reading reports by Parliamentary committees is normally a pastime more likely to act as an antidote to insomnia than to lift the spirits. So it is pleasing to report on a rare and uplifting exception to that rule.

In the long and generally unproductive history of the land reform debate in Scotland, I have never come across any more hopeful document than the Interim Report of the House of Commons Scottish Affairs Committee on Land Reform, published last week.

Here at last is a lucid setting out of the issues at stake, the wider context within which they have developed and the areas of reform which must be addressed if anything is to change. It is a report devoid of rhetoric and outstanding in clarity of words and thought. Let me offer you one statement from it as an example.

“The Committee accepts the evidence that the system of land ownership in Scotland is a direct consequence of choices made in the past in relation to the legal and fiscal framework within which the land is held. These choices were political decisions in the past and they will continue to be in the future”.

The importance of the report lies in the fact that it so clearly identifies the fundamentals of this debate rather than merely railing against the symptoms. For example, it could not be clearer in its criticisms of the entirely deplorable absence of public information about the most basic question of all. Who owns the land? Even where answers ostensibly exist, their purpose is often to conceal the reality rather than to enlighten.

This takes me back to the 1970s when old John McEwen was almost a lone voice in making this point. It was impossible to talk about land reform until you knew who owned the land. A land register was the essential starting point. When government refused to do it, he tried to do it himself (Who Owns Scotland?) and eventually embarrassed them into initiating a Land Registration process which remains hopelessly incomplete today and excludes questions of beneficial ownership.

Let this paragraph from the Committee’s report be a monument to the fact that John McEwen was right: “The first step in any meaningful strategy of land reform must be the creation of data on ownership and land values which is comprehensive and accessible. Regrettably, Scotland lags behind most European countries in providing such data and we therefore call for the Scottish and UK Governments to give priority to this matter”.

Will this clear recommendation now be acted on? It recalls the exchange last May between Ian Davidson MP, who chairs the Scottish Affairs Select Committee and has driven its interest in land reform, and the Prime Minister. Very astutely, Davidson picked up on an inititative agreed by the European Council of Ministers at UK instigation to make declaration of beneficial ownership by all companies a legal requirement.

In advancing that very major reform to tackle tax evasion on a vast corporate scale, the UK Government certainly did not have Scottish landowners in mind. But David Cameron could scarcely dissent when Davidson asked if his government would cooperate with the Scottish Affairs Committee “in establishing who owns and controls the great landed estates in Scotland, in order that they can minimise both tax avoidance and subsidy-milking”. Cameron confirmed: “That is the intention.” There was to be no opt-out clause for landowners.

Against that background, it is more relevant than ever to start the “comprehensive and accessible” land registration process as quickly as possible. There is no need for delay and the Scottish Government should now take an immediate lead. A mouse of a Bill which they put through Holyrood in 2012 to update the Land Registration legislation was dismissed in expert evidence to the committee as “a lost opportunity”.

The report deals extensively with ways in which hereditary land ownership is sustained by the taxation system without regard to the public benefit which is obtained from these arrangements. What this reflects is the success of the Scottish landowners’ lobby over many years in constructing a network of benefits and exemptions which is entirely unique to themselves and solely in their own interests.

For example, there is a little known scam called the Conditional Exemption Tax Scheme in which landowners guarantee certain rights of public access in return for another layer of tax concessions. HMRC “occasionally” ask Scottish Natural Heritage to monitor whether the terms of each deal are being acted upon. The Scottish Affairs Committee asked HMRC for annual reports on how the scheme was operating but were refused on grounds of commercial confidentiality. They now recommend that public access to these reports should be allowed and the “public benefits” reviewed.

The report describes how all these tax benefits accompanied by subsidy-milking have the effect of driving up land values and making it even more difficult for working farmers to gain access to land. In other words, public money and publicly-funded tax benefits invariably enhance the capital value of the land, further enrich the landowners (whoever or wherever they might be), shore up the inequalities which are inherent in the system and block the door to even incremental change.

When the Scottish Affairs Committee announced its intention to instigate this report, it was condemned by Scottish Land and Estates (successor body to the Scottish Landowners Federation) as “unwarranted, unnecessary and bizarre”. It is even easier to understand now why the last thing they wanted was a review which dug deep into the fundamentals of the system and called into question, in a clear and rational way, the incredible structure of privilege they have built for themselves over the decades.

The good news is that the Scottish Affairs Committee has realised that it has alighted upon “an important, neglected and intensely political” aspect of Scottish society and now intends to produce a “more comprehensive report than we have originally envisaged”. Excellent, but there is no need to wait for what that final report says in order for action to begin.

For example, the way in which the Scottish Government intends to implement the CAP reforms should be reviewed immediately to find if they represent (as they almost certainly will) another “subsidy-milking” racket for the big landowners. Addressing that question in the spirit of the House of Commons Scottish Affairs Committee Interim Report on Land Reform would at least suggest a long-overdue interest in this “important, neglected and intensely political” subject.