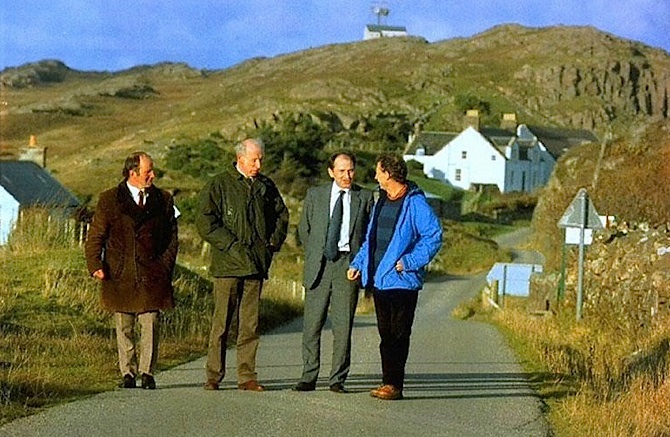 When I first became interested in land rights in Scotland, I remember reading an article in Crann-tara in 1978 by Danus Skene in which he observed

“It once befell me, while working in East Africa, to read widely concerning land tenure in Africa and its relation to problems of social and economic development. These days I often find myself stressing two items of African experience that seem to bear more than passing relevance to Scotland. First, no country with so inequitable a land distribution as Scotland would ever receive a jot or tittle of overseas aid in the rural sector. Second, any country with such a land distribution and with much of the landownership in alien hands would, anywhere but Scotland, be facing a revolutionary phase. Why should what is unacceptable in Rhodesia or imperial Ethiopia be of no consequence in Ross-shire?”

I recalled this as Community Land Scotland convened a seminar last week at Bunchrew, outside Inverness exploring the international context for land reform in Scotland and, in particular, the rights-based approach to development.

Prior to 1997, the UN, governments and NGOs based most of their development programmes on a ‘basic needs’ approach. Since then, however, and following the UN Secretary-General’s 1997 Programme for Reform, human rights is now a cross-cutting theme of all UN activity and the rights-based approach is now being adopted by donors and NGO’s as the framework within which to plan development assistance.

Following an international conference on community land rights in 2013, delegates from international agencies, human rights groups explored these issues with activists from across Scotland in two days of very productive discussions that will inform the debate in the years ahead. Out of this emerged the Bunchrew Declaration which is reproduced in full below.

“We have had a very valuable meeting with other Scottish, UK, EU and international land reform interests over two days last week. By referencing ourselves to what has and is happening internationally in land reform you are forcefully reminded that land reform has been and remains a cause that is legitimately pursued to empower communities and win a more people centred approach to land governance. Far from land reform being just the interest of a small group of radicals, as it is often portrayed, in fact land reform is a mainstream international cause in which the UN and national governments around the world are actively engaged.

“When you meet with others out-with Scotland, you are also reminded just how far behind the rest of Europe Scotland is in land reform, most countries having brought about greater land justice in centuries past.

“We have left the meeting with renewed commitment to bring about land justice through land reform and the legitimacy of the cause, and we are pledged to learn from and work with others to bring this about.”

Michael Taylor of the International Land Coalition observed that,

“Like any country facing high concentrations of land ownership, challenging this structure also means challenging the concentration of economic and political power with which land ownership is so intertwined. Community Land Scotland is now setting its sights internationally; on learning from land reform movements in other countries and on linking in with global processes that can support their cause.

“Community Land Scotland’s efforts are simultaneously a national and a local struggle; nationally in gaining political and public support for land reform, and locally in demonstrating the tangible benefits to communities of moving from being tenants to being landowners. Their achievements, and of the many that work with them, are impressive.”

Some of the thinking developed at the meeting was stimulated by a very interesting paper written by Professor James Hunter – Rights-based land reform in Scotland: Making the case in the light of international experience. Copy here (762 kb pdf)

Rhoda Grant MSP has tabled motion S4M-09502 in the Scottish Parliament as follows.

That the Parliament congratulates Community Land Scotland on the publication of the Bunchrew Land Declaration; supports the renewed commitment that it makes to what it considers the just cause of further land reform in Scotland, including in the Highlands and Islands; notes its reference to Scotland having yet to take the decisive action of other European countries to bring about more equitable patterns of land ownership; further notes its call to established land ownership interests to recognise the manifest unfairness of current land ownership patterns in Scotland, and welcomes its reference to more people-centred land governance and the achievement of land justice in Scotland.

This declaration was adopted following a meeting at Bunchrew House, by Inverness, Scotland on 19 and 20 March 2014 involving land policy and reform interests from Scotland, the rest of the UK and internationally and which explored land reform in Scotland within an international context and with particular reference to the achievement of greater social justice and the realisation of human rights.

having shared the experience of land ownership in Scotland, the effects of that ownership being in the hands of so few people, and its impact in contributing to the decline of communities historically and today, and in denying opportunity for more people and communities to take responsibility for and share in the bounty of the land;

having explored the parallels with land reform internationally and the solidarity felt with peoples facing dispossession of and clearance from their lands today;

understanding the impacts on bio-diversity and on the degradation of land caused by land uses favoured by many current owners in Scotland;

recognising the relevance and legitimacy of international legal frameworks, obligations and guidance to Scotland for change in land governance arrangements to help tackle land injustice and secure more sustainable futures for its people;

aware of the Food and Agriculture Organisation of the United Nations Voluntary Guidelines on the Responsible Governance of Tenure 2012;

conscious of the possibilities flowing from the Scottish National Action Plan for Human Rights to contributing to deliver change;

mindful of the consideration and scrutiny of the Scottish land reform question within the Land Reform Review Group within Scotland, and the Scottish Affairs Committee of the UK Parliament, and the development of the Community Empowerment Bill;

re-affirms with renewed strength its commitment to pursue the just cause of establishing new land ownership patterns in Scotland;

anticipates thus empowering more people and communities to negotiate with current land-owners to take ownership and responsibility for land and associated assets, such as housing, bringing a people centred approach to land governance in support of the common good;

associates itself with terms of the Antigua Declaration adopted by the International Land Coalition in 2013;

pledges to work in collaboration with others active in Scotland, the rest of the UK, and internationally, in pursuing policies to secure greater land ownership justice;

undertakes to learn from others what it is appropriate to learn and apply in Scotland;