The Interests of Scotland’s Wild Salmon 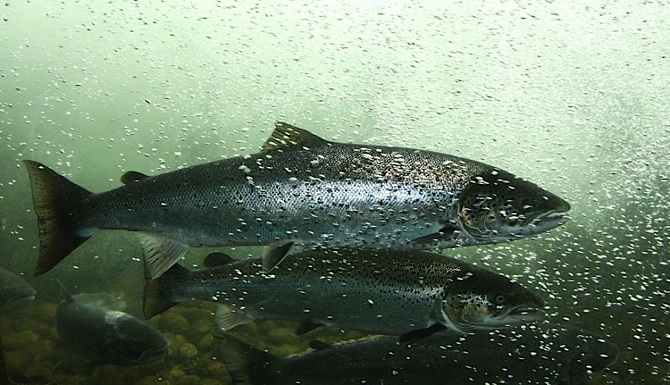 The debate between aquaculture interests and wild salmon interests continues to generate strong feelings. In this Guest blog, Fiona Cameron reflects on how the interests of Scotland’s wild salmon are being represented. Fiona is a writer and journalist.  Her second novel (writing as Nancy McKnight) is due to be published within the next few months; one of its principal themes is the conflict between salmon farmers and fishery owners on the fictitious Hebridean island where the Balvaig Trilogy is set.

THE INTERESTS OF SCOTLAND’S WILD SALMON

Over the past decade, I have worked as a lobbyist and a public relations, marketing and communication consultant for Scottish wild salmon and sea trout interests. During that period, I also spent some time working for a salmon farming company which was, at the time, the most enlightened in Scotland in its attitudes to environmental stewardship – mainly, I suspect, because it was not at that point listed on any stock exchange.

The experience of working for both “sides” has left me decidedly cynical about both, but also deeply convinced that the current system of riparian ownership does not serve the best interests of Scotland’s wild salmon and sea trout. Riparian owners appear to be primarily interested in conserving the value of their landholdings and fishing rights rather than the fish – though I admit there are some honourable exceptions to this.

Unfortunately, those same riparian owners tend to be the people controlling the various charities which exist to promote the conservation of our country’s wild salmonids. I don’t claim that they are consciously using their privileged position in terms of access to politicians and regulators to pursue their own interests but I believe that they simply do not perceive the conflicts of interest which arise. (1)

For instance, the manager of one such charity has used his prominent role to publicly call for the closure of a commercial salmon netting station whose primary impact is on the South Esk, a river where this same gentleman is a major riparian owner. Such an appeal could easily be construed as one owner of a valuable heritable interest using his position to attempt to close down the business of another owner of a valuable heritable interest.

Where the waters get distinctly muddy is with claims that the argument is based solely on grounds of conservation of fish. Have no fish at all have been killed by angling interests on the particular river mentioned above? Is this not a case of “do as I say, not as I do” in relation to the commercial netsman’s right to kill fish? If the argument is a scientific one based solely on conservation, then riparian owners with direct financial interests in the rivers under question are not the people to be doing the lobbying.

We should bear in mind throughout that Scotland’s wild salmon are part of our national heritage, both culturally and legally. In Scots law the fish are res nullius (wild things belonging to no-one) until they are caught.  What is owned is the right to fish and there is a clear case for management of salmon and sea trout stocks to be overseen by government, on behalf of the people of Scotland.

In a similar vein, we have the many tirades against salmon farming which are led and supported by riparian owners. This is a more complex scenario because salmon farming undoubtedly has adverse impacts on wild salmonids (particularly on sea trout) if it’s carried out in the wrong locations. However, the monocausal argument which riparian owners have advanced or supported to account for declines in wild salmon and sea trout stocks everywhere from the Solway Firth to the Pentland Firth simply doesn’t hold water.

There are many, many causes for the decline of wild salmonids. The presence of salmon farms in certain locations is simply one of them and it may not be the most significant one. Monocausal rants simply damage the cause of wild salmon conservation since any argument against expansion of what is one of Scotland’s few successful industries in terms of export earnings will only succeed if it sticks rigidly to the facts. Hyperbole won’t cut it with politicians whose interest is in protecting national income. Headlines such as “Fish farms blamed as salmon river shares dive” (Scotsman 15 July 2013) above an article in which the main complainant was a banker who owns a share of fisheries in the River Lochy for which he’d paid a cool half-million are not calculated to promote political action to save wild salmon! In essence, I believe that riparian owners have to face up to their own role in promoting the decline of wild salmonids.

In his excellent book Saving Scotland’s Salmon, Derek Mills points out that in the years of salmon abundance through to the 1970s, anglers had no complaints about the number of fish being taken by coastal nets. But of course,

“Salmon angling was a more relaxed pursuit then and many of the well-known beats were fished mainly by the proprietors and their friends, and sometimes not fished at all if conditions were such that fish were unlikely to be caught.. (for example, when the river was low).”

Mills perceived a change in the angling scene from the early 1980s onwards, as fishery proprietors realised that salmon fishing could earn them big money. Some riparian owners began leasing their fishings to syndicates, while others sold time-share for high sums (vide the poor banker who squandered his half-million on a share of the Lochy).

“There was some concern,” writes Mills, “over the way this would effectively take away the availability of some salmon fishing for a considerable time and reduce public access.”

I’d say there should be equal concern over the way it has increased fishing pressure, as those who have paid high sums for a week’s fishing will want to fish come hell or high water (no pun intended).

We are continually told (mainly by riparian owners and their spokesmen) that salmon angling is not “a rich man’s sport”. A glance at the guide prices in the annual auctions run by such stalwarts of conservation as the Salmon & Trout Association and the Atlantic Salmon Trust is enlightening. Such auctions will also include some offers of fishing at prices less than £200 to show just how egalitarian they are. It’s always the exceptions which prove the rule…..

I fully agree with the spirit of Derek Mills’ book title. Something needs to be done to save Scotland’s salmon (and indeed, sea trout). But are riparian owners (whose vested financial interests can be considerable) fit persons to oversee this?

At this moment when there could be an excellent opportunity to reform land law in Scotland, we have the best chance since pre-Victorian times to reform the laws relating to riparian ownership too.

(1) For example, the Atlantic Salmon Trust membership comprises the following, at least five of whom have proprietorial interests in salmon fisheries. The Trust spent a total of £187,444 on “direct charitable expenditure on promotion of salmon conservation”. Despite the Trust’s emphasis on scientific research, a mere £12,098 was spent on this in 2013. In comparison, the Chief Executive’s salary amounted to £53,216, the travel and subsistence budget for two Directors was £16,732 and the PR budget was £26,711. Source: AST Accounts 31 March 2013.

Patron
The Prince of Wales

President
The Duke of Westminster