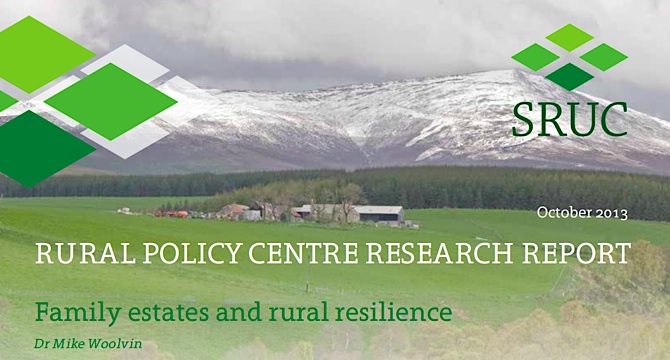 A report was published today by Scotland’s Rural College (SRUC) entitled Family Estates and Rural Resiliance. It contains the findings from a series of 23 interviews with landowners of so-called “family estates”. The report contains a few interesting observations but adds little to our state of knowledge about landownership in Scotland.

First of all is the problem of definitions. What is a “family estate”? The report does not say. One presumes it is an estate owned by a whole family but I know of none that meet this definition. The report contains no analysis of whether estates are owned by companies, trusts, individuals or other legal entities. Such structures are important not least because they often constrain precisely who in the “family” is the owner – often this may be a son or grandchildren. But the most important information that is missing is any analysis of gender. Are these estates owned by men or women in the family and what stake do children have? Given the long history of primogeniture and male landowners, this missing gender dimension makes it difficult to understand precisely whose voice is doing the talking and on what basis.

Another problem is that the research in so far as it examines the role played by “family estates” in their wider community, only interviews the landowners and not the wider community. It would have been interesting to see whether the opinions of the interviewees are shared by the community with which most of them seem so enthusiastic to embrace.

For example (and this is purely anecdotal of course), I received this email today from somebody who is dealing with a well-known “family estate” I guess you might call it.

“they have a huge influence on life in this area and I personally have noticed a fundamental change in the last 10 years or so where they have gone from being generally a well thought of and benevolant influence in the community to the complete opposite where now they are obstructive, disliked and untrustworthy. You will be hard pushed to find someone who has a good word to say about them.”

The most obvious problem with this piece of work, however is the sample. The findings are based upon interviews with only 23 landowners. That is a very small sample but there are two more serious flaws.

The sample is derived solely from the membership of Scottish Land and Estates (SLE) which immediately biases the sample towards those who choose for whatever reason to join this organisation. The most serious flaw, however, is the fact that Scottish Land and Estates had the final say selecting the 23 owners. SRUC initially selected random estates using codes from an anonymised database provided by SLE. Once selected, the codes were sent to SLE. In the words of the report, SLE “then checked that the ones we had selected were resident family estates. if not, we then re-selected, again from the anonymised database“.

This means that SLE had the opportunity of selecting those data subjects which would show “family estates” in the best light. Whether it did or not I cannot say and neither can the researchers – and that is the fundamental flaw in the research design. We cannot therefore trust that the sample is even representative of “family estates” who are members of SLE (a problem exacerbated by SLE who, it appears, used their own unpublished definition of a “family estate”).

Moreover, knowing the identity of the subjects means that SLE had the opportunity to speak to them in advance of the research. Whether it did or not I cannot say and neither can the researchers.

Not surprisingly perhaps, SLE are very happy with the report and are majoring on the theme at their trade stand at the SNP conference where they are launching a “Community Engagement Programme“. 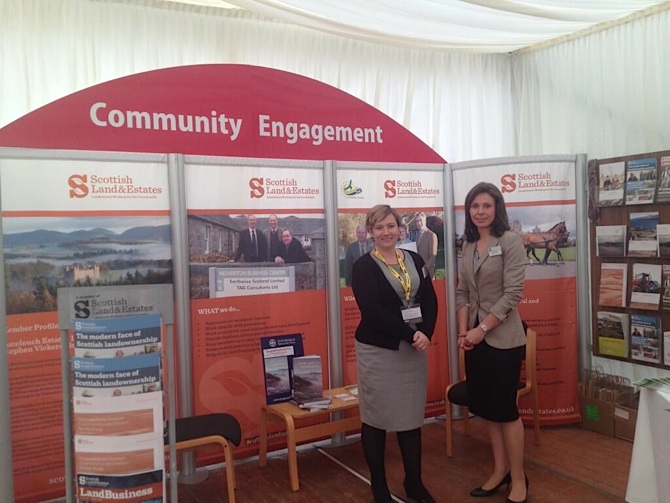 In a tweet today, SLE Chief Executive revealed the flawed premise upon which much of their argument rests. I will leave you to spot it.

This kind of design flaw has happened before with research undertaken by the Scottish Agricultural College, the predecessor to SRUC. Nine years ago, in a study of nine estates, it was revealed that the subjects were chosen by the sponsor of the research – the Scottish Estates Business Group – my critique of the time is here).

The next report will look at the role played by “charity” landowners. I trust that SRUC will adopt a clear definition and it would be very interesting to see whether they include the Applecross Trust and Mount Stuart Trust in their sample.

This report is based on a seriously flawed sample methodology and cannot be trusted. It tells us little beyond the opinions of 23 individuals whose authority even to speak on behalf of their “family” is never explained. No attempt is made to validate the views and opinions of the 23 interviewees by seeking the views of others with whom they engage. The research amounts to little more than a series of chats with individuals who have a vested interest in findings that can be presented, interpreted and promoted in a positive light.

In the acknowledgements, the author writes, “I would like to thank the 23 interviewees for their time in sharing their views with me“. That about sums up the research.

But please don’t take my word for it. Read it and make up your own mind.