..one of the last wilderness areas of Scotland.. 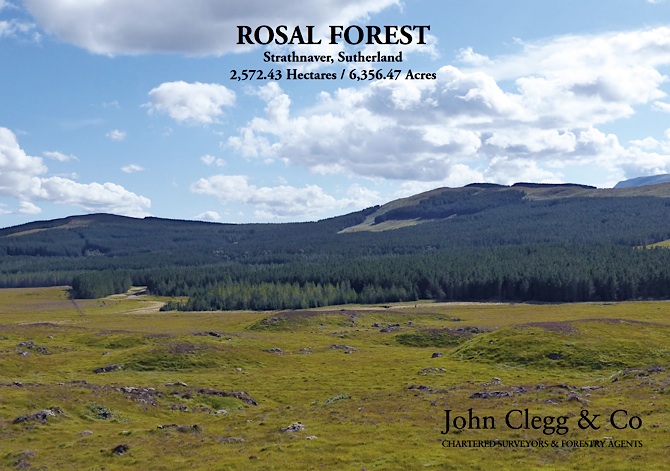 “A unique opportunity to acquire a large commercial forest situated in one of the last wilderness areas of Scotland surrounded by stunning scenery. Offering a significant volume of commercial conifer timber, areas for replanting and excellent deer stalking potential, all set within a unique landscape in the North of Scotland. Sporting rights included.

Rosal Forest is located within one of the few remaining wilderness areas in the north of Scotland. The area is known as Strathnaver and Naver Forest, renowned for its excellent salmon and trout fishing and deer stalking.

Human settlement in this area dates back at least 6,000 years, but Strathnaver is known more for the Sutherland Clearances of the 1800’s when the locals were displaced from their lands to re-settle on the coast or travel by sea to the eastern seaboard of America and New Zealand to make way for a new era of sheep farming. Indeed, within Rosal Forest there are many historical features dating back to this period and beyond. The ruined settlements of Rosal Village in the north of the forest and Truderscaig in the south, provide a fascinating insight into the struggle for ownership of this land.”

Scottish Ministers are selling Rosal Forest in Strathnaver, Sutherland. Included in the sale are numerous clearance villages including one of the best preserved at Rosal itself (see sales brochure 6.5Mb and  sale plan 3.9Mb pdf).

This forest will probably be sold to an absentee investor from England, or a Russian oligarch, or a multinational timber corporation. Scottish forestry will remain in the hands of elites as it currently is and as highlighted in this report from last year.

Next year is the 200th anniversary of the Strathnaver Clearances.

“..one of the few remaining wilderness areas in the north of Scotland

A fascinating insight into the struggle for ownership of this land.”

At 1530 today, a Scottish Government spokesperson said “Rosal has been removed from selling agent’s website.”