Why does Norway have more tenanted land than Scotland?

Should tenant farmers in Scotland be given the legal right to convert their tenancies into ownership of the farm that they and their descendants have occupied and worked in some cases for over a century? It’s a question that will be at the centre of a review of agricultural tenancies soon to be announced by the Scottish Government. It is a question that has already been answered in the affirmative for individual crofters (Crofting Reform (Scotland) Act 1976), for leaseholders of residential property in England and Wales (dating back to Leasehold Reform Act 1967), for crofting communities (Part 3 of the Land Reform (Scotland) Act 2003), and for long leaseholders in Scotland (Long Leases (Scotland) Act 2012).

The issue was last debated in 2003 during the passage of the Agricultural Holdings (Scotland) Act 2003. This act provides secure tenants with a qualified right to buy their farm if and when it is put up for sale buy its owner. Secure tenancies (or 1991 tenancies – so-called after a consolidating Act in 1991) are the traditional form of agricultural tenancy many of which have been in place for well over a century. The Act also introduced new short tenancies for specified durations of 5 years (short limited duration tenancies) and 10 years (limited duration tenancies) – let’s call both of these “2003 tenancies”.

On 4 February 2003 during the Committee Stage of the 2003 Act, Fergus Ewing MSP argued that secure tenants should be given an unqualified right to buy at any time. He argued that,

“I look forward to hearing what my Conservative friends on the committee have to say about why they do not want many more family farms under ownership in Scotland. Do they not accept that the vehicle of ownership will unleash a spirit of entrepreneurialism that could help to achieve some of the objectives that the Executive propounds in its forward strategy for agriculture?

“We believe that it is desirable to elaborate schemes whereby the private citizen and the returned soldier should be in a position not only to rent a house but to own one.” Conservatives believed, he added, believe “that the tenant farmer should be assisted and encouraged to become an owner-occupier.” (2)

The purpose of this blog, however, is not to visit the arguments for and against an unqualified right to buy for tenant farmers but to refute an assertion made by landowners in opposition to it – an assertion that has been repeated ad nauseum for over 10 years.

The day after Fergus Ewing’s amendment was defeated, Robert Balfour, the chairman of the Scottish Landowners’ Federation task force on land reform, said, “The SLF is glad that common sense has prevailed. An absolute right to buy will not achieve any of the aims of the Bill and will shatter the tenanted sector.”

More recently Scottish Land and Estates asserted that the revival of the debate on right to buy is jeopardising confidence among landowners to let land.

Many landowners, in evidence to the Land Reform Review Group argued that the threat of a right to buy would be a disaster. Richard Stirling-Aird argued that the right to buy was “probably the biggest deterrent to owners of land to let farms, and the mere threat itself is sufficient to pretty well dry up such supply of farms coming up for let”

Roxburghe Estates claimed that “Any proposal to grant existing tenant farmers the right to buy their farm at any time, rather than, as at present, when a landowner plans to sell, will have a serious impact on the supply of land to let. Confidence in letting land would be destroyed“.

1, the threat of a right to buy should lead to any reduction in the amount of land to be let or,

2. such a right would, if it were introduced, reduce the amount of land available to let.

The right to buy has only ever been and is only being proposed for secure tenants – so-called 1991 tenants. As Fergus Ewing confirmed in 2003, no-one has or is proposing that any such right to buy be granted to tenants of 2003 tenancies. It is thus disingenuous to claim that any landowner should be put off granting such short tenancies. Indeed from 2005 to 2012, the number of SLDT tenancies has increased from 285 to 540 and LDT tenancies from 99 to 321. (3)

As for 1991 tenancies, they have been in decline for decades (down from 6348 in 2005 to 5402 in 2012). There is no possibility of any reduction in land let under traditional secure tenancies for the simple reason that landowners stopped granting such leases a long time ago.

There are thus no credible or reasonable grounds for arguing that the threat of a right will lead to a reduction in the amount of land to rent. No-one is granting secure tenancies in any case and no-one is proposing that 2003 tenancies be made subject to any right to buy.

It presumes that if most or all of Scotland’s tenant farmers become owner occupiers, there will be a reduction in the extent of land that is tenanted. Since 1982, there has been a steady decline in tenanted land as illustrated in the graph below – down from 42% in 1982 to 24% in 2012. 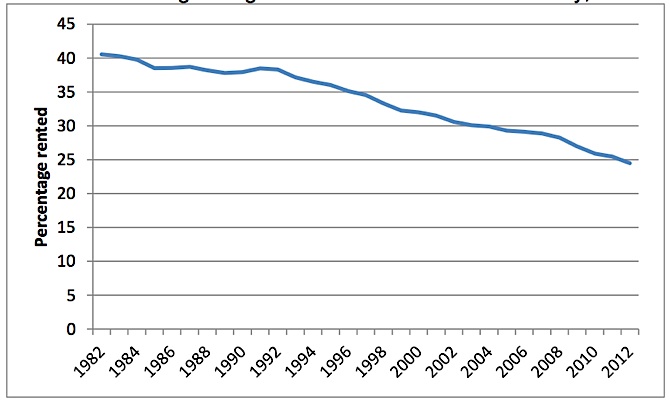 GRAPH – Percentage of agricultural land under a tenancy lasting at least one year 1982 – 2010. Source see footnote 3

Of course, if all tenant farmers were to exercise their right to buy, there would be a further immediate reduction but the important point is that there is no evidence to suggest that the extent of land that is leased overall will, in the longer term, reduce any further than it has already.

Indeed, there is evidence to suggest the precise opposite. In Norway, for example, in a country of owner-occupiers where tenant farmers as we recognise them in Scotland don’t exist, tenanted agricultural land has increased from 20% in 1979 to over 42% in 2010. See graph below. 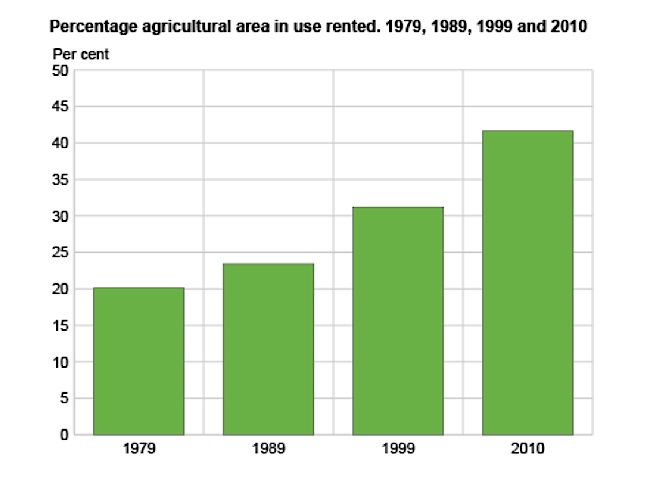 Most countries in the EU have a high proportion of tenanted land. Compared to Scotland’s 24%, France has 74% and Germany 62% of its agricultural land rented out to farmers.

The difference is that the vast majority of Scotland’s secure tenants own no land – they rent the whole farm including the family home. In France and Germany, the vast majority of farmers who rent land are also owner-occupier farmers themselves. In other words, across most of Europe owner-occupier farmers lease land to each other as and when they need to. The landlord and the tenant have equal status because they are both landowners. So whereas in Scotland, it is common for landowners to have multiple tenants, in France and Norway, individual farmers have multiple landowners. 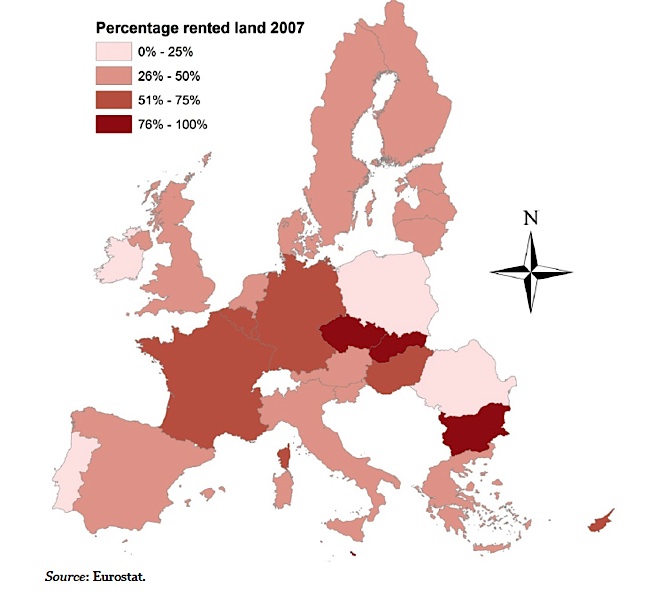 Implementing a right to buy for Scotland’s tenant farmers could easily, if the European experience is any guide, lead to an increase in the amount of tenanted land available.

If this is the case, it lends weight to the argument put forward by Professor James Hunter that the introduction of the right to buy should be accompanied by new freedoms to contract. This would mean landowners were free to enter whatever arrangements they saw fit with prospective tenants. Existing leases would continue until they expired and perhaps the 2003 tenancies would continue to be available for those wishing an off the shelf arrangement.

Is it not time, as this respondent argued to the Land Reform Review Group, to let Scotland flourish?

Richard Lochhead gave evidence to the Rural Affairs, Climate CHange and Environment Committee this morning on agricultural tenancies. I will post a link to the official report as soon as it is available. Meanwhile, here is the text of a statement released after the Committee.

“Absolute right to buy will only be considered for secure farm tenancies in Scotland, the Rural Affairs Secretary has confirmed. Speaking after giving evidence on a range of agricultural matters to the Scottish Parliament’s Rural Affairs, Climate Change and Environment Committee, Mr Lochhead said:

“I have taken this opportunity to confirm more detail about the Scottish Government’s review of tenant farming legislation. I have already made clear that it would be inconceivable for this review not to include consideration of absolute right to buy.

“Today I was pleased to clarify, for the avoidance of any doubt, that consideration of absolute right to buy will be restricted to secure 1991 Act agricultural tenancies which can be passed down through families for generations.

“I also confirmed the review of Agricultural Holdings legislation will be a Ministerial-led, rather than external, review. I will soon be making an announcement on the remit of the review, the appointment of review group members and the timetable involved.

“Many tenant farmers have made the case that current tenure arrangements stifle on-farm investment. Given the current land reform debate in rural Scotland we need to consider what is in the best interest of rural communities and the role individual land ownership plays in this. Landlords’ views must also be heard.

“It is also important that we give all tenant farmers and stakeholders the opportunity to enter into full and frank dialogue about absolute right to buy.”