The case for Land Reform 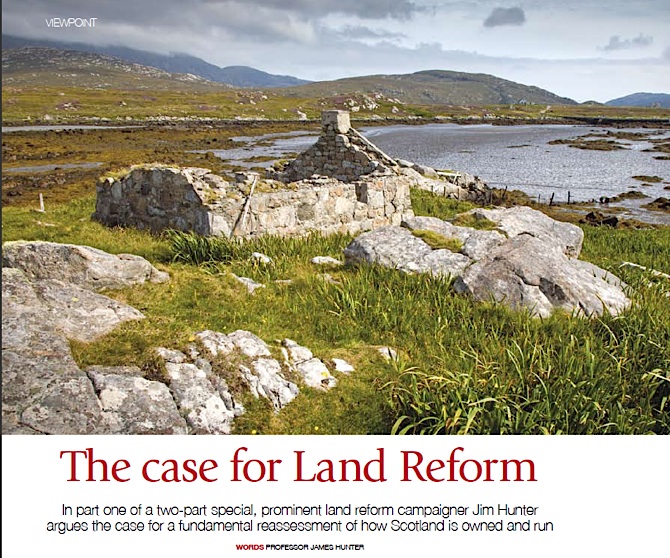 In the first of a two-part series in the Scottish Field magazine, James Hunter, a former chairman of Highlands and Islands Enterprise and Emeritus Professor of History at the University of the Highlands and Islands, sets out the case for land reform. This Guest Blog is the unedited original manuscript submitted to the magazine. The published version contains minor edits for reasons of space and is available as a pdf here. The article is re-published here by kind permission of Scottish Field and the author.

The case for Land Reform

According to sales particulars issued by selling agents Knight Frank, the new owner of the 28,000-acre Auch and Invermearan Estate in Argyll can look forward to getting a guaranteed £12,000 a week from the taxpayer by way of agricultural subsidies and recurrent forestry grants. (3.8Mb pdf sales brochure)

Long unquestioned, such hand-outs to Scotland’s super-rich lairds (and you have to be super-rich to afford Auch and Invermearan at an asking price of £11.4 million) are starting to attract both media and political attention. Reacting to the Auch and Invermearan figure (incautiously revealed by Knight Frank at a point when social security payments are being capped and jobless young folk forced to live on £56.80 a week), the Daily Record commented: ‘Something is rotten in the landed estates of Scotland.’ Glasgow Labour MP Ian Davidson was equally forceful, labelling landowners, as the Record headlined, Scotland’s ‘greediest benefit claimants’. 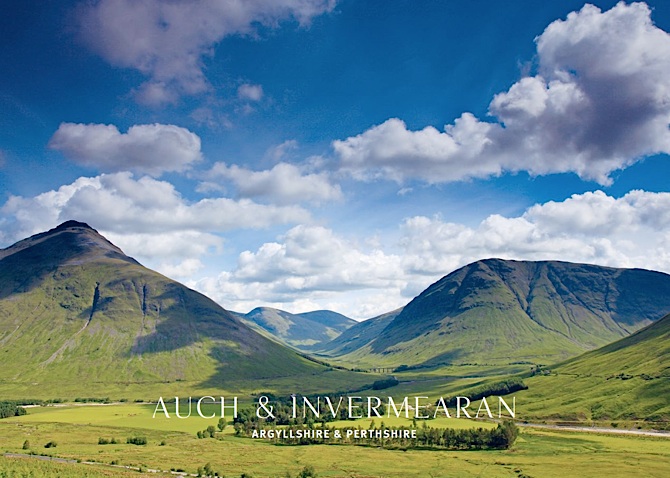 Auch and Invermearan Estate for sale at offers over £11,400,000 from Knight Frank

Nor is anger confined to the political left. Conservative MEP Struan Stevenson rages about energy policies that, he says, will soon have netted Scottish landowners a grand total of £1 billion from wind farm developers. ‘Rental payments vary and are top secret,’ Stevenson writes, ‘but, based on estimates, the Duke of Roxburghe could net around £1.5 million a year from 48 120-metre high turbines at Fallago Rig in the beautiful Lammermuir Hills. Sir Alastair Gordon-Cumming could be earning around £435,000 annually from 29 giant turbines on his Altyre Estate near Forres. The Earl of Moray is estimated to receive £2 million a year from 49 turbines at Braes O’Doune near Stirling.’

These sums, Struan Stevenson points out, are coming out of the pockets of hard-pressed electricity consumers whose bills are inflated to finance both the wind farms and hydro schemes proliferating on landed estates. ‘What we are witnessing,’ Stevenson comments, ‘is a dramatic transfer of money from the poor to the rich.’

That might be more acceptable if landowners were as eager to contribute to the UK national exchequer as they are to extract money from it. In fact, the land agents, lawyers and accountants who make a tidy living from helping lairds inflate their demands on the taxpayer are equally ready with advice on how best to shrink the Big House tax bill.

Favourite devices include: concealing ownership details with the help of nominee companies specialising in such services; transferring ownership of Scottish estates to companies and other legal entities registered in offshore tax havens like Grand Cayman, the British Virgin Islands, Panama and Guernsey; vesting ownership in charitable trusts (their membership often limited to a landowner’s relatives and associates) in order to obtain tax exemptions originally intended to assist organisations like Shelter or Save the Children.

Now that Prime Minister David Cameron is urging international action on tax avoidance and is strongly backing  European Union efforts to crack down on what a recent EU Council resolution calls ‘tax fraud, tax evasion and aggressive tax planning’, some circumspection might have been expected on the part of people whose business it is to minimise taxation of landed wealth. But not a bit of it. Turcan Connell, the Edinburgh legal firm favoured by lots of lairds, are as upfront as ever about their extensive presence in low or zero tax Guernsey and about their expertise in ‘the use of companies, trusts, partnerships and offshore structures for capital gains tax planning purposes’.

Maybe Turcan Connell and their clients think crack-downs on excess public spending and tax-dodging will never impact on the extraordinarily generous taxbreaks, agricultural subsidies, forestry planting grants and other disbursements so readily available to owners of broad acres. If so, they are wrong. The House of Commons Scottish Affairs Committee, chaired by already-mentioned Ian Davidson MP, is mounting an enquiry into what Mr Davidson calls ‘tax avoidance and subsidy milking’ on the ‘great landed estates of Scotland’. This Westminster enquiry, moreover, will be paralleled by two Scottish Government investigations into other aspects of land ownership. An Agricultural Holdings Review will have on its agenda the possibility of Scotland’s thousands of tenant farmers being given an absolute right to buy their farms, and a beefed-up Land Reform Review Group (LRRG) will explore how, perhaps by means of a Land Agency with compulsory purchase powers, community ownership of land can be expanded.

Already 500,000 acres have been acquired by communities. Resulting achievements are spectacular. When, in 2006, the South Uist Estate, then a loss-making sporting property, was bought by its residents, the purchase price was £4.6 million. Six years later, the sporting business was in profit and the estate’s fixed asset value had soared to £24 million. In part, that is down to an £11 million wind farm financed largely from bank borrowings. Even allowing for loan repayments, the wind farm will provide South Uist’s population with revenues of £800,000 annually – revenues that will be transformational in a locality long scarred by disadvantage.

Perhaps forgetting about their own addiction to taxpayer-funded hand-outs, private landowners complain about community ownership’s costs – the taxpayer and the National Lottery between them having allocated some £30 million over twenty years to community land purchase. This is no negligible sum. But neither is it indefensibly large when compared with what privately owned estates take from the public purse  – £30 million being equivalent to spending on UK agricultural subsidies (of which Scottish estates are major beneficiaries) every three days.

Developmentally, moreover, community land trusts are proving a first-class investment. They have unleashed all sorts of entrepreneurial and other energies. They have shown that depopulation can be reversed, businesses created and homes built in localities where these things seemed impossible. Little wonder, then, that Scotland’s First Minister, Alex Salmond, announced in June that he wants another 500,000 acres in community control by 2020.

Underpinning that development – just as it underpins the LRRG, the review exploring tenant right to buy possibilities, and the Westminster probe into tax and subsidy arrangements on Scottish estates – is mounting concern, not to say anger, about the implications of Scotland having much the most concentrated land ownership pattern in the developed world. With just 432 owners accounting for half of Scotland’s privately-owned land, land ownership, along with the many developmental opportunities it brings, is confined, or so growing numbers think, to too few people.

Nor are threats to the landed status quo limited to the various enquiries with which landowners will be dealing this winter. A coalition of environmental bodies are calling for a halt to construction of the scenically-scarring tracks sporting estates instal to transport stalkers and shooters (who seem to have forgotten that field sports are meant to be good exercise) on to the hill. Scottish Anglers for Change, meanwhile, urge action to ‘rid the country of the Victorian legacy of fishing right ownership which denies many taxpaying Scots access to their own rivers’.

Whether Anglers for Change will get what they want – river fishings managed, as in North America, by public bodies committed to universal but licensed access – remains to be seen. But given pressures of this sort, on top of those emanating from the Scottish and UK Parliaments, Scotland’s lairds should clearly be making the best of their many unparalleled privileges while they can.