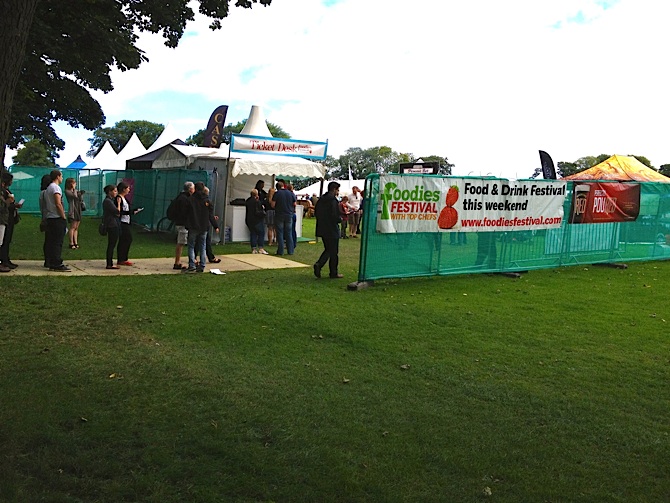 The above photograph was taken earlier today (Saturday 10 August 2013) in Inverleith Park, Edinburgh. It shows members of the public queuing up to pay money to enter a part of the park that has been fenced off for a “Foodies Festival”.

They are being held to ransom.

Three years ago, a similar event, Taste of Edinburgh, set up in Inverleith Park and once again held the public to ransom with no legal authority to charge people to cross that part of the park. I attempted to do so and was threatened with arrest for breach of the peace even although the same police officer had earlier re-asured me that, were I to enter the festival area, it would be a straightforward civil matter. I later wrote up the story in a piece for the Guardian. 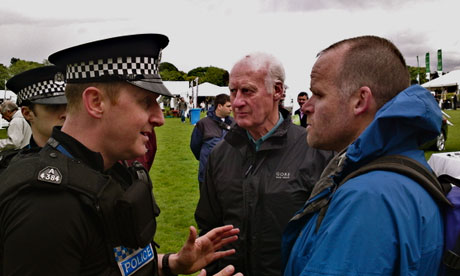 The issue centres around the interpretation of the public access provisions in Part 1 of the Land Reform (Scotland) Act 2003. This Act provides members of the public with a legal right of responsible access to land in Scotland. There are some areas of land that are exempt from this legal right but public parks are not one of them.

Thus the first thing to establish is that I and others have the legal right to walk across public parks subject to any local bye-laws (which may provide for example, that parks can be shut at night-time). These legal rights therefore apply to Inverleith park and to the land occupied by commercial festivals that charge an entrance fee.

If anyone wishes to exclude the public from an area for more than six days (which was the case in 2010 and is the case with Foodies which is a 3-day festival with 2 days before and after for setting up and clearing the site during which time the public is excluded), then they can apply for a Section 11 Order under the Land Reform Act which will entitle the occupier to exclude the public. This is commonly used for car rallies and such activities. Having excluded the public from access, the organisers of such events are able to charge an entrance fee. It goes without saying of course that any commercial operator needs also to obtain the agreement of the landowner – in this case the City of Edinburgh Council.

My issue in 2010 was that no Section 11 Order had been sought and thus I was perfectly within my rights to enter the festival area and the organisers have no legal authority to charge me money for doing so. Park rules that were drawn up for Dundee and Glasgow made it explicit that commercial events that charged an entrance fee required a Section 11 Order or they would be in contravention of the Land Reform Act.

Back in 2006, the Local Access Forum in Edinburgh noted that existing park rules at the time conflicted with access legislation on ten points and yet, by 2010, nothing had been done to update them. The Council, in response to my complaint in 2010, asserted that it had the authority under the Local Government and Planning (Scotland) Act 1982 to set aside any area of land for an appropriate purpose and any such land would be covered by Section 6(d) of the Land Reform Act which states that access rights are not exercisable over and land “to which public access is by, or under any enactment other than this Act, prohibited, excluded or restricted“. It went on to claim that nothing in the 2003 Act gave me the right to act in the manner I proposed (entering Taste of Edinburgh) and “which may constitute a criminal offence“. This latter claim was, I believe made to intimidate me as such matters have nothing to do with the criminal law as the Police informed me at the time.

The following year, in 2011, I inquired again of the Council whether the Taste of Edinburgh festival (which had by now moved to the Meadows) was subject to a Section 11 order. This is what the Council told me.

In our opinion the event:

– does not significantly affect access rights within the Meadows;

– has the broad support of the community & the Council;

– does not warrant the additional bureaucracy/costs required by a section 11 application.

Section 11 guidance states that ‘if you are organising a corporate, community, or social event such as an agricultural show, car boot sale, wedding reception, music festival or a car rally, you can ask people to avoid using a particular route or area for the duration of the event.  Informal arrangements will be sufficient to ensure that any interference from the exercise of access rights is kept to a minimum.’

Given this guidance and the advice from the National Forum, which has reaffirmed that a section 11 notice is not needed in most cases, we feel that a common sense approach should be taken in this and future events in parks and other city spaces.  In this case the common sense view is not to require an event taking up a relatively small part of a public park andfully supported by the Council to apply for section 11 exemption.

Now of course a Section 11 Order is not mandatory. The Act merely states that it “may” be applied for. However, if it is not, then my argument is that access rights apply and no-one has any lawful authority to hold the public to ransom. In the context of this weekend’s event therefore, we are back at the position argued in 2010, that the 1982 Act constitutes an enactment for the purposes of Section 6(d) of the Land Reform Act. I contend that it does not. It merely gives authority to the Council to set aside land for an appropriate purpose. The one further development since 2010 is the adoption of new park rules which, unlike Dundee and Glasgow, say nothing about Section 11 orders.

To conclude, the Council has the authority to set aside part of the park for commercial events. it does not, however, have the authority to allow commercial operators to charge the public a fee for entering that part of the park unless there is a Section 11 Order in place. This is an argument accepted by other local authorities. North Ayrshire Council, for example, takes the view that a Section 11 Order is necessary where “there is a requirement to enforce the exclusion of land from access rights”

And that is why the public are, this weekend, being held to ransom in inverleith Park.

Anyone fancy a walk in the park tomorrow?