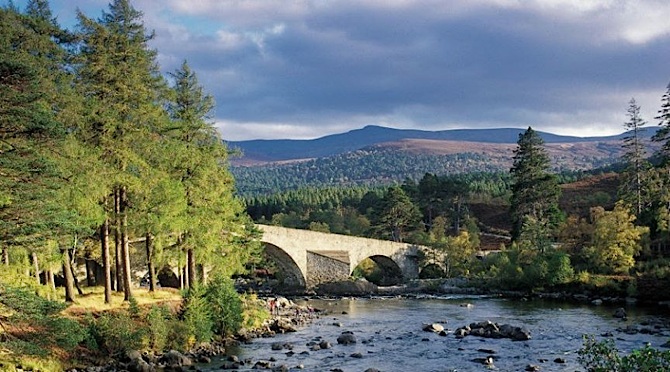 At the weekend we got back to the hills after a period of enforced confinement due to work and school exams. We decided to camp high on the Lochngar plateau and stravage around the hills on Sunday before returning home. Heading off early on Saturday morning, we were delayed for over an hour in Perth due to being first on the scene at a car accident, assisting the casualties and providing witness statements to the police. As a result, by the time we got to Braemar it was time for lunch. The sun was shining and we decided to have a picnic on the banks of the River Dee.

Despite being one of Scotland’s most scenic and famous rivers there are very few places where tourists can pull off the road and wander down to the river (there’s a long history to this situation). But I know most of them and so we headed down a small track to a fishing hut and parked the car. There was no-one fishing and I parked the car in a way that did not block anybody’s access.

As we sat by the river, our dog Coire, who loves water, decided to go in for a swim. I was tempted myself. So there we were, enjoying our picnic and looking forward to getting on the hill. Suddenly, the peace was interrupted by a loud shout.

“Get your dog out of the river!”

We turned round. A man was standing some 20 metres away pointing at the river. He looked agitated. We were, for the moment, speechless. Who was he? What gave him the right to shout at us?

“Get your dog out of the river. This is a fishing river, People pay to fish here.”

“What’s the problem“, I asked as I walked towards him to find out what all the fuss was about. He was dressed in fishing gear but was not, I suspected a fisherman – more likely a ghillie I thought.

He then pointed to our car.

“Move your car. This is not a public highway. You’re blocking access.”

Of course, on this point he was right. I am well aware of the fact that pulling off any main road in Scotland generally places you on private land upon which you have no legal right to be. But I was not blocking access. There was no-one fishing at the time. Perhaps there was someone about to arrive in which case I would have been happy to co-operate.

At this point I wondered whether it would be possible to have a civilised conversation with this man who, by this time, had still not introduced himself or explained why he assumed the right to shout at us in such an aggressive manner.

As I pondered what to do he shouted,

“If you don’t get out of here I’m going to call the police.”

At which point I concluded that there was little point in engaging him in conversation.

“Go ahead – be my guest“, I replied and turned back to finish our picnic. Coire was still happily playing in the river but we were stressed and anxious about the encounter.

We finished our picnic and left to head to Glen Muick, where more surprises awaited but that’s a blog for another day.

I have spent a good deal of my adult life in the hills around Deeside. I know many of the landowners and the people who work there. I also know that the estates still have a hegemonic role in the area. We were on Invercauld Estate and I presume that the ghillie is employed by the estate. The man in the photograph on the estate’s home page indeed looks very like the gentleman involved.

In conclusion, this is not simply a matter of public access. It is a manifestation of how those in authority continue to project landed hegemony.

I now plan to find out who he is, who employs him and to ask for an apology from them both.

Invercauld Estate has confirmed that the person involved is an employee of theirs. The factor, Simon Blackett, has apologised for the incident – see comment below together with my reply.

An interesting study was conducted in 2003 examining the perceived conflicts amongst user groups on the River Dee. Part of this relates to the use of language. One critic on twitter (an Aberdeenshire landowner) suggested that it was “irresponsible and selfish to let my dog splash in a fishing pool” Pools of water in the River Dee have different meanings to different people – to me and my dog this was a swimming pool not a fishing pool – actually the stretch of water concerned is NOT a fishing pool. 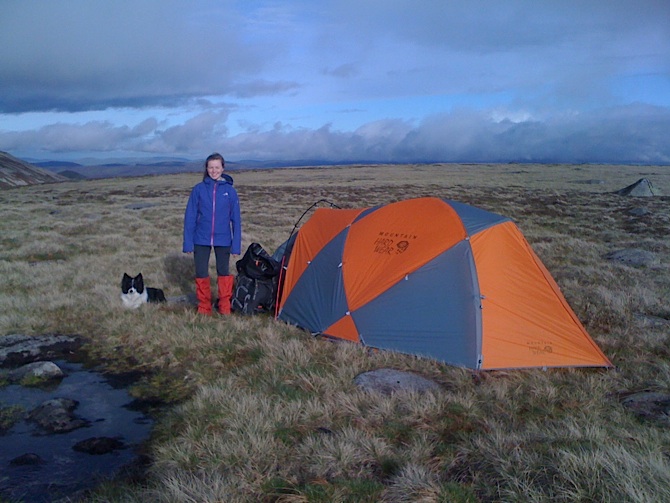 An enjoyable night on the Lochnagar plateau gave ample time to digest the events of Saturday.