The back of the envelope duly arrived in Sleat last weekend 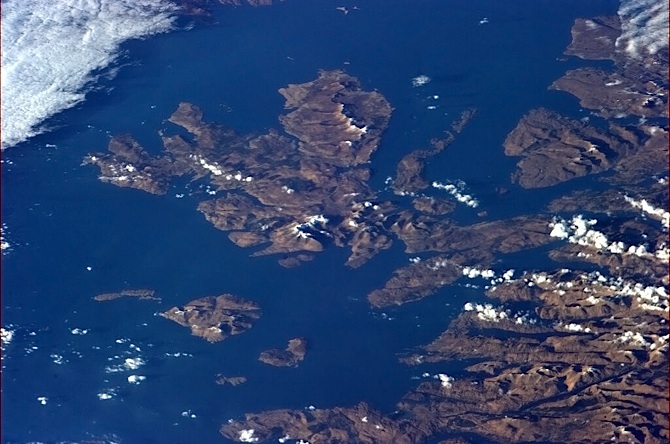 The back of the envelope duly arrived in Sleat last weekend

The back of the envelope duly arrived in Sleat last weekend, borne by Alex Salmond.  What was written on it amounted to no more than a headline. But since headlines are his raison d’etre, that will count as a good result.

As pointed out in last week’s Free Press editorial, Mr Salmond’s sociable wee trip to Skye had taken on a different perspective due to the hostile response accorded to the interim report of the Land Reform Review Group and particularly the scathing comments from Jim Hunter, erstwhile member of that group.

It was not only the vacuous nature of that document which attracted comment but the inherent redefinition of land reform which it contained.   In effect, this had been reduced to a discussion of “community ownership” which, in turn, had been reduced to the level of Third Sector jargon, rather a part of any broad, reforming strategy.

Mr Salmond’s speech, and his subsequent comments, need to be measured against that unpromising backdrop.  Did he reassert the need for Scottish land reform – to address what he once declaimed against as “a problem, a question and a scandal in every part of Scotland” –  and recognise that a whole range of weapons will be required to address it?  No he did not.  Quite the contrary, actually.

The headline sought and obtained was about “a target” of one million acres under community ownership by 2020.  Targets are useful devices for politicians, especially when set at such a safe distance.  But to have any credibility, they need to be accompanied by a route-map which gives at least some clues as to how they might be reached.

Sadly, there was no room on Mr Salmond’s hastily scribbled envelope for such detail – leaving no more than an empty assertion which duly became the headline in the Scottish media which, in general, neither knows nor cares enough about these matters to explore beyond the press release handed to it.

At present, there are roughly half a million acres under community ownership, the vast majority of them in crofting areas and particularly the Western Isles. Much of the low hanging fruit has already been picked, thank goodness. And of course, there were the Stornoway Trust’s 63,000 acres already in the bag before the modern wave of buy-outs began.

So where are the next 500,000 acres of buy-outs to come from?  If Mr Salmond had the slightest clue about the answer then he declined to share it.  Take a number, double it and you have your headline. No need for anything more, First Minister.

The only other announcement was an extension of the Scottish Land Fund until 2016 with another £3 million in the pot which will now mean £9 million over five years instead of £6 million over three.  Anyone who thinks they are going to change Scotland’s land ownership structure with that budget is seriously deluded.  It is far less than the previous Scottish Land Fund operated with a decade ago.

Also, I can’t say that I am terribly impressed by how the new Scottish Land Fund has interpreted its role so far.  As I pointed out at the time, there was a danger in the remit of supporting the purchase of “land and land assets” – the latter term being capable of covering just about anything.  And so it has started to prove.

The early subjects of grants made by the Scottish Land Fund include a lighthouse in Moray, a village hall in the Borders and a smokehouse in Assynt.  I do not for a moment question the worthiness of these projects – but the idea they have anything do with land reform is a joke.  There has so far been no significant award which shifts the ownership balance by one acre, far less 500,000.

I also notice that the maximum grant which can be applied for to the Scottish Land Fund (Mark Two) is £750,000. This makes it unlikely that there will be any more buy-outs on a South Uist or North Harris scale within that constraint.  So once again I ask, what is the substance behind the “one million acres by 2020” target – and the answer is absolutely none.

But community buy-outs can only occur, even hypothetically, where there are viable rural communities. That generally means in crofting areas where a specific legal framework creates a rationale for collective acquisition. But most of rural Scotland is not under crofting tenure and much of it has been reduced to minimal populations under the existing system of land management.

From both Mr Salmond’s remarks and the Land Reform Review Group report, it would appear that these vast acreages have already been written out of any land reform agenda. Indeed, Mr Salmond and his colleagues have been going out of their way to offer that reassurance to the Scottish Landowners Federation as I will continue to call it.

In a BBC Alba interview last Friday, Salmond ruled out compulsory purchase on the grounds that “if we tried to compulsorily purchase land, we would end up for generations in the European Court of Human Rights”.  This is patently untrue and “blaming Brussels” for one’s own lack of action is a well-established refuge for political scoundrels.

If the option of compulsory purchase is ruled out in this cavalier way, then we will stay exactly where we are now – with no effective sanction against even the most extreme abuse of land ownership and control.

What is urgently needed is a clear setting-out of both options and constraints in terms of substantial land reform, open for comment and discussion –  not an ex cathedra assertion from the First Minister which has no obvious basis in fact and which, if accepted, would close down a crucial option for driving change.

The other issue on which there is now nothing but silence is the right of tenant farmers to buy their land – one of the most important means of changing the pattern of vast landholdings and feudal power structures in many parts of rural Scotland.  Is Mr Salmond saying that this too is forbidden by the European Court of Human Rights – or simply by his own anxiety to keep sweet with the landowners?

One observer present at the Community Land Scotland conference in Sleat described his speech as “going through the motions but without any indication of his heart being in it”.  That sounds about right.  But if that is the case, then the certainty is that nothing much is going to happen because in order to drive a land reform agenda there has to be belief and sustained commitment to overcome the powerful forces both externally and within Government.

It is both a tragedy and a warning that no such belief or commitment exists among those who currently hold power in Scotland.  The empty rhetoric of the past has been replaced with the conservative inertia of the present and, if we allow it, the future.