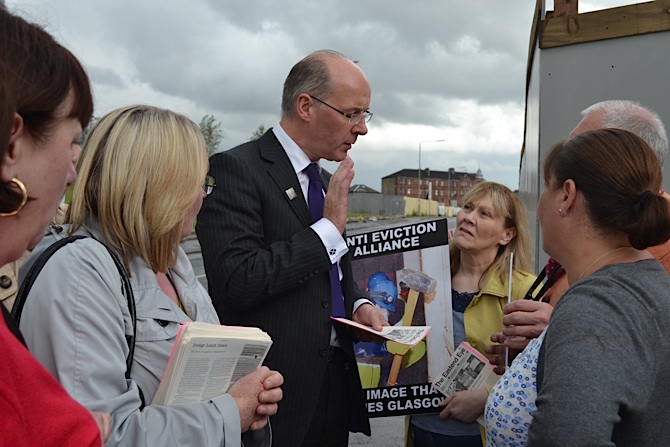 Alex Salmond gave an interview to BBC Alba at the Community Land conference on Skye on Friday (see previous post of today) in which he appeared to rule out the use of compulsory powers as part of any new measures to strengthen the rights of communities to buy land. Listen to the audio link above in which he says,

“If we tried to compulsorily purchase land, we’d end up for generations in the European Courts. I mean .. that’s very clear.”

The European Convention on Human Rights (Article 1 of Protocol 1) makes perfectly clear that land can be acquired against the interests of the owner provided it is in the public interest to do so and that it is done in accordance with the law.

Compulsory powers of land acquisition have existed for well over a century. The Scottish Government has most recently introduced such powers in order to acquire land for the Commonwealth Games (picture above shows John Swinney meeting protesters who object to the use of these powers).

There is a well-established body of statute and case law which provides ample guidance for Parliament when framing any new powers of compulsory purchase. Most recently, the Court of Session upheld the powers contained in Part 3 of the Land Reform (Scotland) Act 2003 which provides powers for crofting communities to purchase croft land against the wishes of the owner. The Lord President ruled that this law actually provides a level of protection to the landowner that equalled or surpassed anything required by the ECHR (Pairc Crofters Ltd v Scottish Ministers at 68).

Given that the independent Land Reform Review Group is considering new measures that involve a degree of compulsion, one must assume that Mr Salmond was airing his own views and not those of the Scottish Government.

Since I would like to know which it is, I have asked Mr Salmond’s office whether it is the Scottish Government’s policy that no new powers of compulsion will be included in any new land reform measures. I will let you know the answer.

“We have yet to hear the recommendations of the Land Reform Review Group, which are due in their final report in April 2014.  Until then, the Review Group will investigate and consider all options in relation to community right to buy.  This will include any Human Rights considerations, as the chair of the Review Group, Allison Elliot, made clear in her speech to Community Land Scotland at the weekend.”