The narrowest land reform agenda in the world 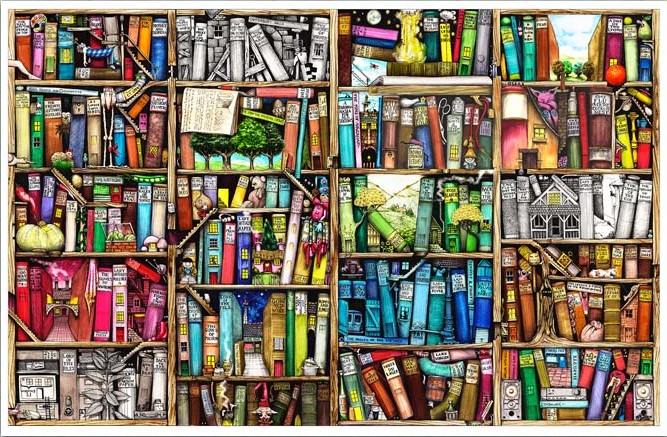 Librarians are important people. They provide order to what would otherwise be chaos in the world’s store of knowledge. The most common way this is done is by the Dewey Decimal Classification system which ensures that you can find information on any topic in a standardised manner in libraries across the world. Land Reform is classified under

Definitions matter. Otherwise, we live in Wonderland with Alice, the Mad Hatter and Humpty Dumpty.

I was forcefully reminded of this at the Community Land Scotland conference on Skye this weekend. It convened in the wake of the publication of an Interim Report by the Land Reform Review Group (LRRG) that has had a less than enthusiastic welcome from land reformers (see for example, here, here and here).

Alex Salmond gave the first speech ever by a First Minister on the topic of land reform and set a target of one million acres of land in “community ownership” by 2016. He promised legislation this parliamentary session to sort out the mind-numbing complexities of the 2003 Land Reform Act and announced a further £3 million for the Scottish Land Fund. Listen to the speech in full here, text here and a brief media interview here. I will blog separately on this ambition (he provided no target for how he would like to see the pattern of private ownership by 2020). (1)

The important thing about his speech was that it belatedly re-vitalised the land reform debate. In May 2007, after forming a Scottish Government for the first time, Scottish Ministers instructed civil servants that “enough has been done on land reform“. On 1 June 2007, the Land Reform Branch within the government was wound up and replaced with the Community Assets Branch.

In their 2011 Manifesto, the SNP made the following promise

“We believe it is time for a review of Scotland’s land reform legislation. For example, we believe the current period for three months for communities to take advantage of their right of first purchase is too short, and we would wish to see it extended to six months. We will establish a Land Reform Review Group to advise on this and other improvements which we will legislate on over the course of the next five years.”

In July 2012, Alex Salmond announced the formation of the LRRG which was given its remit in August. What became clear when the Group published its Interim Report was that a wide-ranging remit that sought radical proposals had evolved into a Group considering solely matters to do with community ownership (and a selective definition of that term). See my original critique here for further background.

And this is where definitions and meanings come into play. Alex Salmond’s speech was, of course a highlight of the conference but much of the interest was also focussed on the speech by Dr Alison Elliot, the Chair (and sole surviving original member) of the LRRG. The most significant revelation was that her definition of land reform is, in best Humpty Dumpty tradition, just what she chooses it to mean.

The classic dictionary definition of land reform is the redistribution of agricultural land to (usually) landless people. Most development agencies and non-governmental organisations, however, deploy a wider definition. The United Nations, for example, describes it as “an integrated programme of measures designed to eliminate obstacles to economic and social development arising out of defects in the agrarian structure.”

“Land is a diverse concept that depends on whether you are looking at it from a legal, financial, land use or social perspective i.e. its ownership, value or use. Reform may concern the changing of land rights (land tenure reform), the redistribution of ownership or use rights (including land consolidation and land reallocation, i.e. reforms to the pattern of ownership), alterations to land use (e.g. physical changes in agricultural practice or through inner city development), changes to land tax (that bring about changes in land ownership, value or use), or changes in how land is managed, etc.

“In summary, the term ‘land reform’ embraces all those processes that alter the pattern of land ownership, land rights, land values or land use within a specified area.” (My emphasis.)

Mainstream framing of land reform is characterised by two features – it is broadly defined and it is programmatic (that is it involves a series of interventions forming part of a coherent programme).

This is precisely what the Land Reform Policy Group did between 1997 and 1999 when they published a programme of proposals which ranged from public access legislation through tenement law reform to the establishment of National Parks. The roots of the current confused stance of the LRRG can be traced back to then. One of the products of the 1999 programme was the Land Reform (Scotland) Act 2003 which included the right of public access, a community right to buy and a crofting community right to buy. At the time I argued against using the term “land reform” as the title of the 2003 Act. I argued for two acts – a Public Access Act and a Community Right to Buy Act (in two parts). In her speech, Dr Elliot stressed how this one element of the earlier programme was the starting point for her Group’s deliberations.

If that was always the intent, then the remit given to the group compounded the confusion by appearing to provide a wide ranging remit to examine radical proposals. I and many others welcomed what appeared to be this broad programmatic approach. But it is clear now that we misunderstood matters. There are conflicting reports as to whether this fits with the original remit as envisaged by Ministers. On the one hand I hear reports that some in the Scottish Government are mystified at this turn of events. On the other hand, Alex Salmond has now endorsed the Interim report and given the group a vote of confidence. We are where we are.

The most significant practical impact of of this narrow focus on community ownership (and a restricted interpretation even of that term) is that other potential beneficiaries of land reform will gain nothing from it. In many parts of Scotland there are vast tracts of land with few or no people living in them. There is no community to even begin to consider community landownership.

The real economic potential of land reform lies in providing opportunities for individuals (who after all are what make up communities), co-ops, businesses and other collective groups to obtain rights over land and resources and to invest capital, skills and energy in developing enterprises. The other key potential relates to developing an appropriate fiscal environment in which land speculation is eliminated, levels of private debt minimised and productive investment can be made by young people in particular in urban land, housing and business assets.

In Orkney, for example, Udal law meant that land was inherited by all children. (Children under the rest of Scotland’s land tenure system do not have any legal rights to inherit land.) The fragmentation of holdings and the subsequent development of a plural pattern of owner-occupation in the early 20th century provided the basis for the islands’ future prosperity. It is this potential which appeared to be encapsulated by the first of the LRRG objectives, namely to “enable more people in rural and urban Scotland to have a stake in the ownership, governance, management and use of land …“. It remains a source of some bewilderment how “people” in this context can be taken to mean only groups of people acting through a corporate community body.

This restricted definition is of course only that of the Chair of the LRRG. I argued back in July 2012 that the value of the LRRG depended on its definition of land reform and its remit. There remains the possibility (indeed the hope) that it is widened following discussion with other members of the expanded Group. If not, then it will be up to others (perhaps a real land reform review group) to explore and deliver the full potential of land reform for Scotland.

(1) Alex Salmond noted that “Land ownership is currently overly concentrated” but appears to believe that more community ownership will resolve this. There is no evidence that the two are linked in any way.

In a written answer (S4W-15291) to Rhoda Grant MSP, Paul Wheelhouse said that the remit of the LRRG has not changed.

Rhoda Grant (Highlands and Islands) (Scottish Labour): To ask the Scottish Government for what reason the interim report of Land Reform Review Group focuses on community ownership and whether this reflects a change in the group’s remit. (S4W-15291)

Paul Wheelhouse: The remit of the independent Land Reform Review Group (LRRG) has not changed. The consultation, which yielded 484 submissions, has brought forward a wide range of issues on a broad range of subjects, including farm tenancy issues and issues regarding access. In the view of the LRRG, as set out in its interim report, issues raised regarding farm tenancies represent an area already being considered by the Tenant Farming Forum and as such, the review group, as its interim report states, will now concentrate on taking forward a number of issues in respect of the implementation and geographic impact of community right to buy legislation in order to support communities throughout Scotland in achieving their social, economic and environmental potential. The work of the LRRG will also help to formulate potential approaches to extending right to buy to urban Scotland and will inform consideration of the Scottish Government’s community empowerment and renewal proposals.

As was stated during the Land Reform debate on 5 June 2013, issues regarding farm tenants will be considered as part of the review preceding the Agricultural Holdings Bill proposed for later in this parliamentary session.