The most concentrated, inequitable, and undemocratic land ownership system in the entire developed world 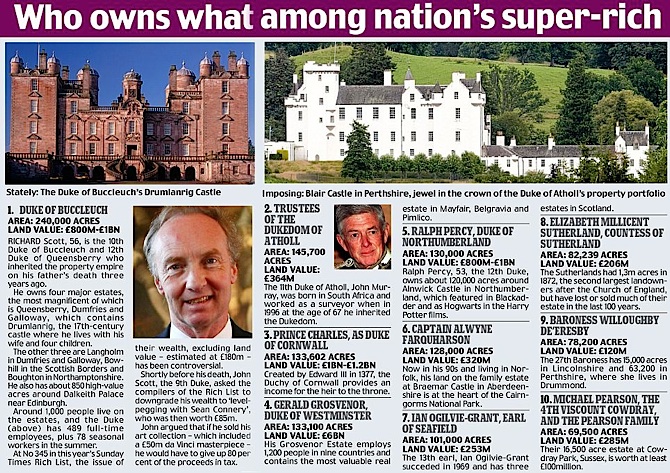 Professor Jim Hunter, Highland historian and former chair of Highlands and Islands Enterprise, was a member of the Scottish Government’s Land Reform Review Group until early April 2013 when he left the group for personal reasons. On Monday 3 June 2013, Jim Hunter was asked by The Herald to comment on the possibility of the Review Group being restructured. The resulting Herald item was published today.

Jim Hunter’s full statement to The Herald was as follows:

“If the Scottish Government are serious about land reform, Ministers and the government machine more generally must be involved directly in the work of the group.

“The relevant Cabinet Secretary, Richard Lochhead, should himself chair regular meetings of the group and its advisers. And the group should include senior civil servants with expertise in shaping legislation. This would be to follow the highly productive precedent of the 1997 Land Reform Policy Group which paved the way for the Land Reform Act of 2003.

“The Government should commit right now to legislating in 2014-15 on community land ownership. What needs to be done in this area is clear from lots of evidence already available to the LRRG. The process of getting land into community hands needs to be simpler. And there have to be powers – of the sort to which Johann Lamont has committed the Labour Party – to ensure that moves to community ownership can’t be blocked by existing landlords.

“Beyond that, Government needs to tell the group to explore how council tax and business rates might be replaced by a land value tax – something the Scottish Parliament could introduce with existing powers. Such a reform would benefit Scots right across the board by reducing greatly the cost of land for housing and other development.

“The SNP Government says over and over again that it’s committed to social justice. But there’s precious little that’s socially just about a Scotland where fewer than a thousand people own more than half the country and where tenant farmers, as the LRRG have discovered, are frightened to speak out for fear of repercussions from their lairds.

“Deputy First Minister Nicola Sturgeon said recently of Denmark that ‘it gives us a glimpse of the kind of country we might be’. Well, if she and her colleagues truly want Scotland to be more like Denmark, a country where big estates were long ago confined to history books, then land reform is where they need to start.

“As it is, we’re now six years into an SNP Government which has so far done absolutely nothing legislatively about the fact that Scotland continues to be stuck with the most concentrated, most inequitable, most unreformed and most undemocratic land ownership system in the entire developed world.”