Lord Burton RIP – God bless those who hold the land 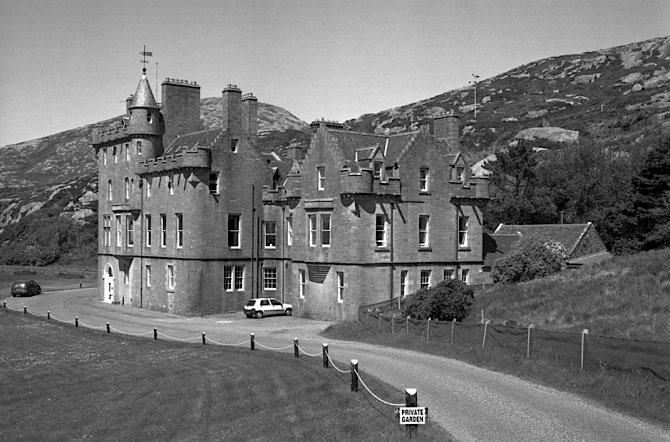 Michael Evan Victor Baillie, 3rd baron Burton of Burton-on Trent and of Rengemore has died. The owner of over 50,000 acres of land in Inverness-shire and beyond, his exploits and antics could fill a book. One famous episode concerned the so-called Abhainn Suidhe bypass on Harris. Abhainn Suidhe Castle (pictured above) stands by the shore of Loch Leosavay and the front door opens onto the road – the B887. The front doors of many people’s houses open onto the pavement but for Sir Hereward Wake, who was the owner of the 62,000 acre estate, the sight of the occasional car passing by was too much to cope with.

Fortunately, Hereward’s old pal, Michael Baille, Lord Burton was at hand to assist. Both had been to Eton and were members of Brooks’s Club in London where they hatched a plan for a bypass. Burton was the Chairman of the Roads Committee of Inverness County Council and secured £40,000 of public funds to build the road to relieve Hereward of the stress he suffered during his jaunts north for shooting and fishing.

This was in the early 1970s shortly after the West Highland Free Press had been launched and they were quick to highlight the case and pursue the story. They lampooned the two wealthy landowners and argued that if the Council had £40,000 to spare (not an inconsiderable sum in those days), there were better projects for it to be spent on. As befits such a splendid campaign, the journalist and writer Derek Cooper wrote a song about it to the tune of All Things Bright and Beautiful.

The rich knight in his castle,
The crofter at his gate,
God made them high or lowly
And order’d their estate.
All highways long and lucrative,
All projects great and small,
All plans for township byways,
Lord Burton signs them all.

God bless those who hold the land
And help their fortunes to expand.

The salmon in the private burn,
The monarch of the glen,
God gave them to his chosen few,
A band of wealthy men
So keep your distance from my moor!
Leave undisturbed my pool!
Drive not past my castle door,
Tread softly on my shore.

God bless the Wake and his relations
And keep us in our proper stations.

“About this bypass Burton
Here’s something for the kitty
A handsome cheque for forty thou’
To help things through committee,
Floreat Etona!
See you in Brookes’ old swell.
God helps those who help themselves
And helps us jolly well.”

After much ridicule, the Roads Committee reversed its decision.