Land tenure is one of the biggest issues facing rural Scotland 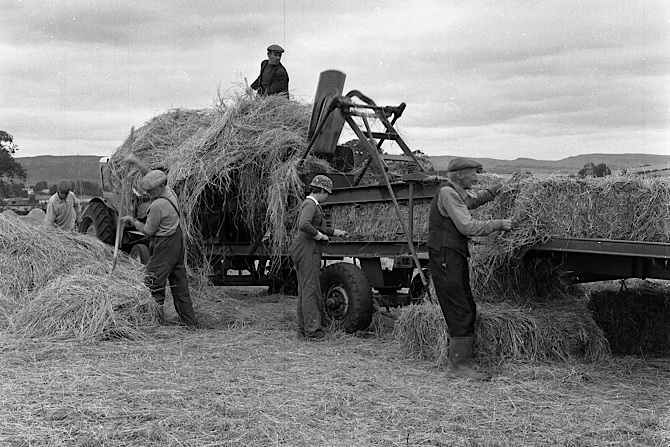 [UPDATE 30 May 2013 This blog is an edited version of the one published yesterday (pdf copy here) in which I incorrectly argued that there was only one review promised in the SNP manifesto. There were in fact two as explained below. However, this fact does not change the substance of my argument. Why are farm tenancies being removed from the scope of land reform to be dealt with on their own?]

Richard Lochhead, the Cabinet Secretary for Rural Affairs and Environment for the past six years, told a conference yesterday that “the future of land tenure is one of the biggest issues facing the future development of rural Scotland“. Here is his speech in full. He was speaking at a National Farmers Union Scotland (NFUS) seminar entitled A Vision for Land Tenure: 2020. (1)

In his speech he announced a new review of farm tenancy legislation.

Now this is interesting because the Land Reform Review Group (LRRG) has been given the task of coming up with radical proposals to take forward land reform but, in its Interim Report published last week, it said that it would be taking no further interest in land tenure as it affected Scotland’s tenant farmers (see my previous post for a fuller discussion). This was a shock to all those who had submitted evidence on the topic and particularly to tenant farmers some of whom, as the report noted, were “fearful of speaking at open meetings, or even of putting their concerns on paper, because of possible recriminations should their landlord hear they were expressing these views in public.” They thus (mistakenly as it happens) placed some faith in this independent review of land reform to address their concerns. Yesterday, Mr Lochhead announced a separate review of agricultural tenancies.

All of which is rather confusing. The rationale for a separate review was that two separate reviews were promised in the SNP election manifesto in 2011. The relevant part of Lochhead’s speech is as follows.

11. This event is very timely, because we are at an important stage of the government’s work in this area.

12. That work includes two separate reviews, as set out in our election manifesto back in 2011.

13. The first review is the one being run by the Land Reform Review Group, who recently published their interim report.

14. That report set out a range of areas to be investigated more fully during the next phase. The group’s intention is to collect more evidence, by speaking to   those involved at the heart of those issues, before presenting recommendations to the Scottish Government.

15. Meanwhile, the government has also been committed to a separate review of farm tenancy legislation.

22. However there’s one thing I can make clear even today.

23. We were always committed to two separate reviews, and now the Land Reform Review Group has decided to focus on other issues for the remainder of their work.

24. So I want to confirm today that all the issues on farm tenancies raised during the Land Reform Review Group’s work will not be lost. They will be carried forward and looked at very carefully in the farm tenancies review.

I have read the SNP election manifesto carefully and the topic is covered on page 39. It states that,

“We will amend the Agricultural Holdings Act to support tenant farmers and will work to encourage new entrants. We also believe that when a farm business is being passed from one generation to the next it should be easier for the successor to build a home on the farm where required.”

So no mention of a review there – simply a clear commitment to amend the legislation which most Governments do by holding a consultation, drafting legislation and introducing a Bill to Parliament.

On the same page, under the heading “Land Reform” it states that,

“We believe it is time for a review of Scotland’s land reform legislation. For example, we believe the current period for three months for communities to take advantage of their right of first purchase is too short, and we would wish to see it extended to six months. We will establish a Land Reform Review Group to advise on this and other improvements which we will legislate on over the course of the next five years.”

Scotland’s land reform legislation is the body of statute that emerged from the work of the Land Reform Policy Group chaired by Lord Sewel from 1997-1999. it is all laid out on the Scottish Government’s website and it includes the question of agricultural holdings legislation which also formed an explicit part of the remit of the LRRG (Annex A here). The task of the LRRG is to “review Scotland’s land reform legislation“.

However, the SNP also published a farming manifesto which states that.

“We will work with the sector to increase the amount of land available for rent and bring in the legislative changes already proposed and review the effectiveness of the amended act within 18 months.”

The legislative changes referred are now included in the Agricultural Holdings (Amendment) (Scotland) Act 2012 which received Royal Assent on 12 July 2012. The review promised in the farming manifesto is only of this amended Act and does not address the many issues tenant farmers raised with the Land Reform Review Group.

All of which gives rise to a number of questions.

Given that the LRRG has dropped the issue, will the remit of this second review be broadened out beyond a simple review of the effectiveness of the 2012 Act?

Why exactly has the LRRG dropped this topic from the mainstream of land reform?

Why, if farm tenancies were indeed “always” to be the subject of a separate review, was this not made clear at the beginning of the LRRG process?

Why, if farm tenancies were “always” to be the subject of a separate review, were tenants led to believe that the LRRG would be considering these issues, were encouraged to provide evidence and indeed were involved in face to face meetings in the field?

Did Scottish Ministers exert any influence over the LRRG to drop any further consideration of farm tenancies?

Land reform is an integrated programme of work designed to do four things.

Why is the Scottish Government messing around with this issue and passing one of the most pressing land reform issues to another as yet unknown review process to be announced “after the summer break“?

What on earth is going on?

(1) two of the presentations given at the seminar are available – Phil Thomas, Chair of Tenant Farming Form and Clive Phillips of Brodies, Solicitors.

The Chair of the LRRG gave a speech to the AGM of Scottish Land and Estates on Tuesday 21 May. It was given from notes and no written speech was published but I understand that she said that the farm tenancy issues was dropped due to “timescales and lack of specialist knowledge”.

The timescale of the LRRG from July 2012 to April 2014 is a generous 20 months. Members & advisers were appointed by Scottish Ministers who presumably were fully aware of what specialist knowledge the members and advisers have. It is reasonable to conclude therefore that the lack of specialist knowledge was by design not accident. The Scottish Government press release of 24 July 2013 states clearly that advisers would be appointed “with expertise in areas such as property and land issues, economics, legal issues, community-led organisations, landownership, forestry and access“.