A vision for the Future of Allotments 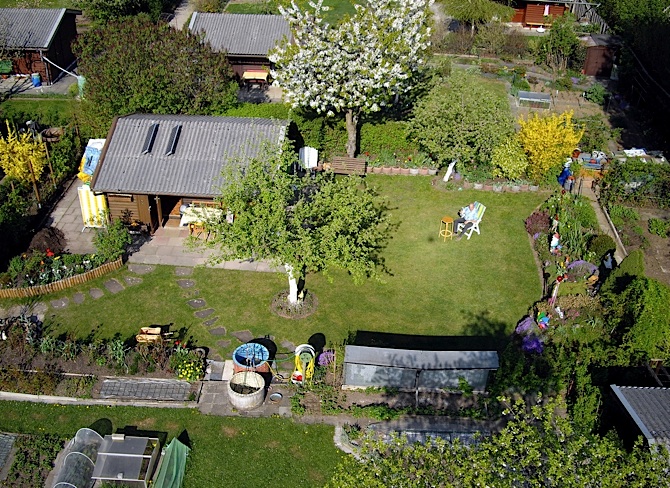 It is significant that the media release is illustrated with a tiny little garden shed and a wheelbarrow – the essence of the spartan and utilitarian idea that was embodied in the Allotments (Scotland) Act 1892 (original version here) which provided the statutory basis for burghs to respond to any “demand for allotments for the labouring population in such burgh….” Section 2(1) This notion of a small plot of land for the labouring classes to grow food has hardly changed in over a century (and of course the ruling class had no need for such legislation being mostly in possession of ample land themselves).

Meanwhile, in the rest of Europe, things developed rather differently. Sure, there are allotments like we have, but there are also other arrangements which provide fuller opportunities for urban dwellers to enjoy life in the garden. Which is why I have included what I think is a fantastic aerial view of my own vision of what allotments could and should be like – a far cry from the pokey patches of ground that allotments consist of today. Please do click on the image to see a larger version.

This is an example of the German Schrebergarten – suburban gardens which can be lived in over the summer and which provide a wonderful refuge for German families. See a previous blog for further discussion on the benefits this creates for children and families including a wonderful video.

My vision of the future is of land around our towns and cities devoted to food-growing, suburban gardens and forests – something like Frankfurt – and further out on the continuum, huts….

Of which more soon.

Meanwhile do respond to the consultation which is open until 24 May 2013.

The Scottish Government is holding 3 “engagement” events to allow members of the public to discuss the allotments consultation and how it fits into the wider work being taken forward by the Community Empowerment and Renewal Bill.

Those wishing to attend are requested to email AllotmentConsultation2013@scotland.gsi.gov.uk at least 72 hours before the event to allow the necessary security arrangements to be made.