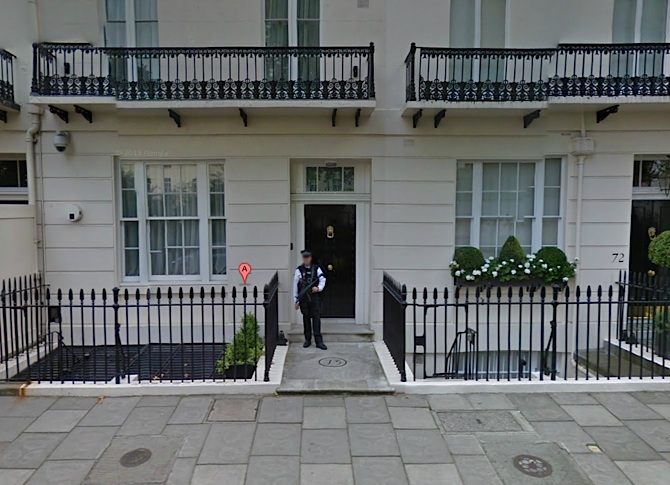 The Mirror carries a report today (13 April 2013) that the house that Margaret Thatcher lived in for the past 20 years is “owned” by a company called Bakeland Property Company Ltd. registered in the British Virgin Islands. The story is a little confusing and conflates ownership with leasehold. The fact that the house is owned offshore was first reported by Rob Evans and David Hencke in the Guardian in 2002.

In England and Wales, land is owned on a system of Freehold and Leasehold whereby Party A may be the Freeholder but may grant a lease to Party B (the leaseholder) of, for example 100 years. The property is thus “owned” by both parties simultaneously. In the case of 73 Chester Square (pictured above on Google Streetview) there are actually three parties with an interest in the property. (1)

1. The Freehold is owned by the Trustees of the Will of the Most Noble The 2nd Duke of Westminster.

Assuming that the leasehold interest was held by Bakeland Property Company Limited on behalf of the late Mrs Thatcher (who thus had a proprietorial interest in the house as opposed to simply being a tenant and having no connection with Bakeland), that the beneficial interest is inherited by her children Mark and Carol, and that, as the Mirror claims, the house is currently worth £6 million, then both inheritance tax at 40% (£2.4 million) as well as Stamp Duty Land Tax at 7% on any subsequent sale (£420,000) will be avoided.

The new Stamp Duty Land Tax rate for residential properties owned by corporate bodies of 15% only applies to properties acquired since 21 March 2012 and will not apply where the legal title remains in the same name and only the beneficial ownership of an offshore trust or company changes.(3) It may well be the case that Bakeland is owned by trusts whose beneficiaries are people other that the late Mrs Thatcher but because offshore companies are usually run by nominee Directors and owned by at least one offshore trust, the identification of the precise beneficial interest is extremely difficult.

And that is one of the legacies of Mrs Thatcher’s property-owning democracy. (4)

(1) There are 4 parties if you include the fact that Freeholders are not absolute owners but hold their land from the Monarch who is the only person capable of owning land “absolutely” in England and Wales as this entertaining exchange of emails with the Land Registry demonstrates.

(2) Thanks to @MrsTrevithick for alerting me to fact that Bakeland was, until 1996 registered in Jersey. This explains why there are two leasehold titles in the name of the same company – actually two different companies with the same name.