the many problems facing our fragile, remote community .. 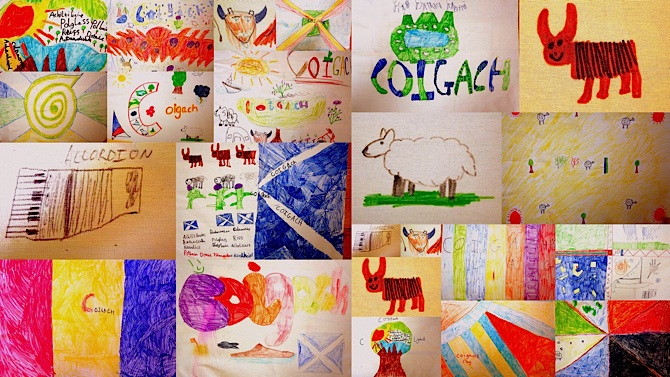 I am delighted to host a guest blog by Julia Campbell from Coigach. Julia works for the Coigach Community Development Company but the views she expresses here are her personal views. They were submitted as evidence to the Land Reform Review Group. Further details and other evidence can be found here.

I work for Coigach Community Development Company which was set up in 2010 to tackle some the many problems facing our fragile, remote community on the Coigach Peninsula in the North West highlands. Most of our difficulties stem from the continuing fall in the population. In the 19th century and until the beginning of the 20th the area supported five schools – now there is one with a current roll of 19 (it was nearly 40 in the 1990’s), which will fall to 13 next year, and to 8 by 2017 – unless we can find a way for more families to move here.

The land is currently owned by two main landowners: Ben Mor Estate by Scottish Wildlife Trust (SWT), and Badentarbet Estate is in private ownership. Most of the cultivated land is under crofting tenure and development is sparse in traditional crofting style.

I carried out an informal census recently (I just drove round and made notes from what I know about each house and its inhabitants) and counted 246 habitable houses – of which 126 are lived in. The rest are second or holiday homes. There are 19 local authority homes, built over 30 years ago since when they have been more or less fully occupied and there are three households living in caravans. These council houses were built cheek by jowl, with tiny gardens, minimal parking and no room for sheds or workshops – difficult as many people here have practical jobs and businesses that need all these things. And strange in a landscape of traditional crofting township format.

When houses do come on the market, they go for high prices and increasingly more and more are snapped up by more affluent people from elsewhere as holiday homes. For people on modest income who want to live here it is very difficult to find a home: it’s widely acknowledged that chances of getting a council house are so slim many people don’t even bother putting themselves on the seemingly never-ending waiting list, and there seems to be no mechanism for getting a croft unless you are lucky enough to know someone who is willing to assign one. We have seen various young people and families who would like to live here simply give up and move away and as a result the population shrinks and so the services available to those of us still here.

It became apparent some years ago that the local authority was not going to do anything to resolve the housing situation so the Development Company has set about it. We are planning to put up a community wind turbine to generate an income so we can (amongst other things) build some community housing to attract families to the area. My feeling is that people moving to areas like Coigach also want a bit of land – especially when there appears to be so much of it around here! One of the many attractions about living in this part of the world is the degree of self-sufficiency that is possible with access to land. People want to grow vegetables, keep hens, build sheds: anyone moving to this area more or less has to bring their own job with them and they need space to do that.

Places like Coigach attract enterprising people that somehow make a living and are fairly open-minded about how they do it. Most people have several little jobs and are self-employed, and practical skills are greatly valued. With modern communications and access to the internet, theoretically all sorts of remote working is possible though broadband speed and access remains an issue. Whatever you choose to do you need somewhere to live and somewhere to work.

Once we have our turbine income we’ll have more options, however, we are a small organisation with a board of voluntary directors (who are already stretched trying to make their own livings and most are involved in other local services run by volunteers) with two part-time employees so our capacity is limited. We hope to have the support of SWT for access to land (as we often point out, school age children are one of the area’s most endangered species), but doing anything on Badentarbet Estate has proved to be impossible to others who have tried in the past.

The owners do not want development of any sort and have objected and therefore prevented previous initiatives which included modest plans for workshop units for local use in the past. It remains their land of course, and to so with as they please – and we remain at their mercy.

We got very close to a community buy-out of some land last year: enough to build some community houses and workshop units. We jumped through all the hoops of the Community Right to Buy process and raised the necessary funding. The community ballot was strongly in favour and then the owners pulled out at the last minute as they did not like the valuation given – which was all we would be able to raise in funding. So six months work ended with nothing – but some useful experience.

I’d like to see more crofts available to new (or returning people) and the availability of land at affordable prices so ordinary people can build and make life for themselves here. Most of the world, including the south of Britain seems to be struggling with over-population: we are having the opposite problem but I feel sure given the chance, there are many people who would like to live in the Highlands.

They would enjoy the many benefits that life here has to offer, and in turn help us sustain our lives here. Unless something happens to reverse the decline in population here, it looks like many remote, Highland communities could disappear and all that remains are exclusive holiday retreats.