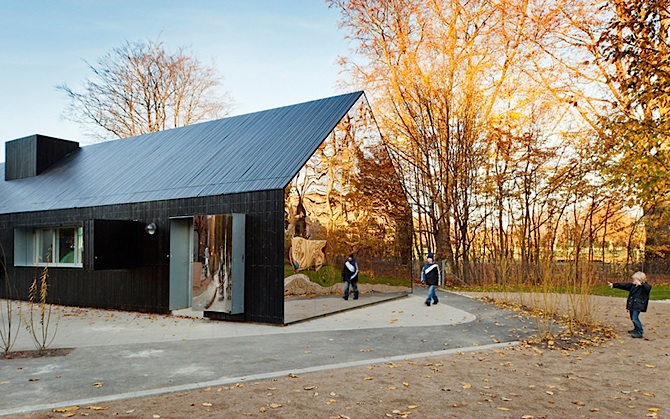 Pictured above – a Danish kindergarten paid for in part by Danish property taxes on Scottish land.

The Scottish Government is consulting on the future of the the non-domestic rates (business rates) regime. The consultation closes this Friday 22 February 2013. Business rates are a land and property tax paid by the occupiers or owners of certain types of land and premises used for business. I have blogged before on the inadequacies of the business rates regime here, here and here.

My response can be downloaded as a pdf here and is reproduced below.

The system of non-domestic rates is a land and property tax applied to (most) land and property that is used for business purposes. Like other land taxes (council tax, stamp duty land tax etc.) it should be designed on a set of principles that reflect what a land tax is supposed to achieve.The Scottish Government is currently in the process of reforming non-domestic rates, stamp duty land tax and has announced its intention to review the council tax.

All of these plans represent a fairly comprehensive programme of property tax reform. And yet none of these them appear to be informed by any clear set of principles that should underpin why and how land is assessed for taxation. The challenge for reform of property tax is to develop a system that is;

In this context, it is disappointing to note that no account appears to have been taken of the significant review of the UK taxation system led by Professor James Mirrlees, a Scottish economist, Nobel prize winner and member of the Scottish Government’s Council of Economic Advisers.

The Mirrlees Review concluded that non-domestic rates should be abolished and replaced by a system of land value taxation. (1) The Review observed that,

The economic case for a land value tax is simple, and almost undeniable. Why, then, do we not have one already? Why, indeed, is the possibility of such a tax barely part of the mainstream political debate, with proponents considered marginal and unconventional?

This is such a powerful idea, and one that has been so comprehensively ignored by governments, that the case for a thorough official effort to design a workable system seems to us to be overwhelming.

The economic case for taxing land itself is very strong and there is a long history of arguments in favour of it. Taxing land ownership is equivalent to taxing an economic rent—to do so does not discourage any desirable activity. Land is not a produced input; its supply is fixed and cannot be affected by the introduction of a tax. With the same amount of land available, people would not be willing to pay any more for it than before, so (the present value of) a land value tax (LVT) would be reflected one-for-one in a lower price of land: the classic example of tax capitalisation.

Owners of land on the day such a tax is announced would suffer a windfall loss as the value of their asset was reduced. But this windfall loss is the only effect of the tax: the incentive to buy, develop, or use land would not change. Economic activity that was previously worthwhile remains worthwhile. Moreover, a tax on land value would also capture the benefits accruing to landowners from external developments rather than their own efforts.

The Review concluded by recommending that,

“There is a strong case for introducing a land value tax. In the foreseeable future, this is likely to mean focusing on finding ways to replace the economically damaging business rates system with a land value tax.” (my emphasis).

In an analysis of land value taxation for the Scottish Green Party, I noted that businesses are currently disproportionately taxed on the land and property that they own and/or occupy. Under a system of LVT, business premises would enjoy a 63% reduction in their tax bill with the burden more evenly shared among all those who own land and property. (2)

I therefore suggest that the Scottish Government do two things.

1. Set this review of non-domestic rating in the context of a wider review of land and property taxation.

2. Adopt the recommendations of the Mirrlees Review and replace non-domestic rates (and I would argue Council tax too) with a system of land value taxation.

Notwithstanding the above, if the system of non-domestic rates is to continue, then there needs to be reform of the reliefs and exemptions. Two in particular stand out.

The first is agricultural land. It is unreasonable and unfair that some of the wealthiest owners of land in the UK such as the Duke of Westminster, Duke of Buccleuch and Sheik Mohammed bin Rashid al Maktoum (the ruler of Dubai) pay no business rates on the land they own whilst local shopkeepers, publicans, ambulance stations, fire stations and business premises have to pay 45p in the pound of the rental value of their business premises.

It is further irony that some owners of sporting estates and agricultural or forestry land do pay local taxes. There are around 290,000 acres of land in Scotland owned by citizens of Denmark. This land is subject to Danish property tax at 1% on the value up to DKK 3,040,000 and 3% of the value exceeding this amount. At a rough estimation this should yield the Danish tax authorities around £1.5 milion per year to pay for kindergartens and health centres for Danish citizens. Yet these landowners pay no tax to any Scottish authority to help to pay for public services. (3)

The second is empty industrial buildings. On 28 November 2011, the former co-op building at 120-130 Morrison Street caught fire and resulted in the largest blaze in Glasgow for many years with over 100 firefighters and 16 fire appliances in attendance. The building is owned by Straben Developments Ltd of Belfast who bought it in 2007 for £4.2 million. As an empty industrical building its rateable value is £300,000 but it receives full relief on business rates. This has saved the owner aroudn £675,000 in tax over the past 5 years. And yet the owner still expects Strathclyde Fire and Rescue to put out the fire, Strathclyde Police to police the incident, the Scottish Courts to provide the means to resolve any disputes arising and Glasgow City Council to absorb the costs and inconvenience of having an empty derelict site in the heart of the City. (4)

Non-domestic rates is explicitly a land and property tax. It is therefore open to question why it should be paid by the occupiers of business premises at the rate of 45% of the rental value in addition to the 100% rental value they pay to the landlord. Whilst non-domestic rates contributes towards the costs of local services, it is essentially a national property tax.

Non-domestic rates should be paid by the owner and not the occupier.

(1) Quotes taken from Mirrlees Review Tax by Design, Chapter 16 The taxation of land and property.

(3) The Danish tax authority SKAT report that property tax paid by Danish owned property in the UK in 2011 totalled DKK 5.5 million (£635,000). Since my estimate for the tax due on Scottish land is £1.5 million there is probably quite a bit of tax still to be collected. SKAT is running a campaign to identify Danish owned land in foreign countries and encourage Danish taxpayers to declare what they own.