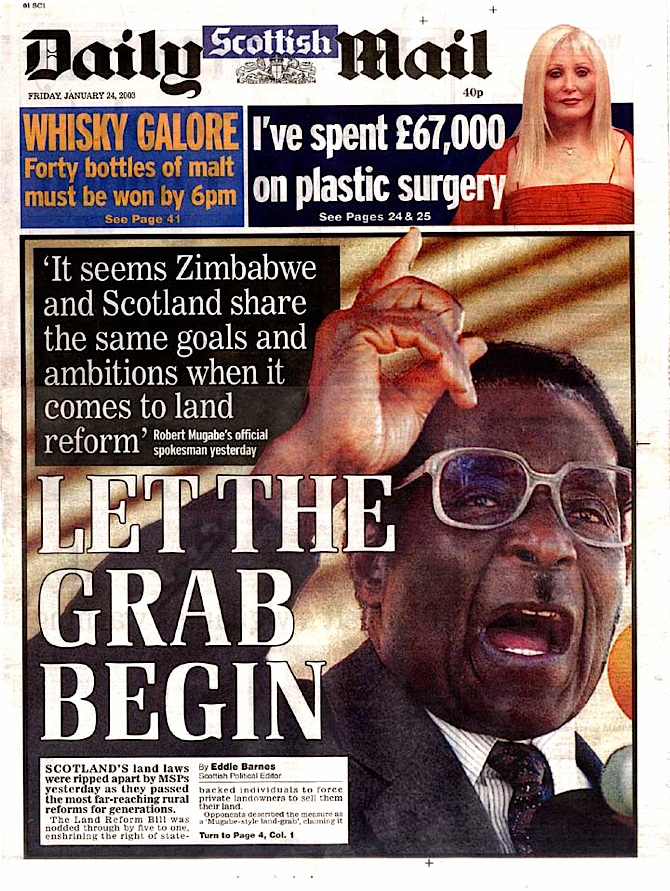 Ten years ago today (23 January 2003), the Land Reform (Scotland) Act 2003 was passed by the Scottish Parliament. The Act provides a right of responsible access to land (Part I), a right for community bodies to register an interest in land and a first refusal to acquire it if and when it is sold (Part II) and a right for crofting communities to acquire land under crofting tenure at any time (Part III).

Part I of the Act is widely acknowledged as a success. Part II has achieved very little and Part III has yet to be used successfully (the only application made under this Part relates to the Pairc Estate and is mired in legal actions – see Malcolm Combe’s blog for further details). The Land Reform Review Group is currently taking evidence on land reform in general including reviewing the Act. (1)

The debate in Parliament produced some passionate speeches. Bill Aitken led the debate for the Conservatives who opposed the Bill.

“The debate and the bill have nothing to do with creating a more positive and contemporary Scotland—it is all about the wrongs and injustices of the past. As I said previously, the bill is by any other name expropriation of property. Again, as has been said, the bill is a land-grab of which Robert Mugabe would have been proud. Mugabe in a tartan outfit – Ross Finnie – is exactly what we are up against.

Frankly, the bill is a disgrace. If it is voted through, this will be a day of shame for the Parliament. To those outdated class warriors and political dinosaurs who regard the activities of today and yesterday as a triumph, I say this: they must forget the wrongs and injustices of the past and put aside their current prejudices. The bill reflects badly on the Executive and on the Parliament, and it should not be passed.”

“As I said to comrade Finnie, commander in chief of the Scottish land-grab unit—[Laughter.]—it was the prospect of this day that kept so many of us going through the dark and often desperate 18 years of Tory government. We were determined to create the Scottish Parliament. The joint determination of the Liberal Democrats and the Labour party in the Scottish Constitutional Convention was to realise this day and to deliver land reform. Like others, I quote Donald Dewar: ―

Not I, nor anyone here. A Tory press release this week spoke of revenge for the Highland clearances. However, it is the Tory party that is living in the past. Comparing mild-mannered, west Highland crofters with the thugs of Zanu PF, or ramblers with the North Korean people’s militia, does a disservice not only to the struggle for the liberation of the people of such countries, but to the Tory party.”

The next day, Eddie Barnes, the then Scottish Political Editor of the Scottish Daily Mail wrote the front page story under a picture of Robert Mugabe (see picture above). In their wisdom, the Daily Mail though it would be a good idea to phone the Zimbabwe High Commission in London for a comment on the historic legislation (they could of course have asked myself or any number of people who actually understood the Bill). The High Commission duly obliged and you can read for yourself the helpful quote they provided.

(1) Evidence to the Land Reform Review Group can be seen here. An overview of evidence on the implementation and progress of the Act was conducted by the Scottish Government and can be downloaded here. It does not include a review of two years operation of the Act that I undertook in 2006 available here. The Rural Affairs and Environment Committee undertook post-legislative scrutiny of the Act in 2010 and commissioned a report from staff at UHI. The lead author of that report, Calum Macleod wrote an excellent summary of the review in the West Highland Free Press and Brian Wilson wrote a short opinion piece.