Donald Trump is a menace 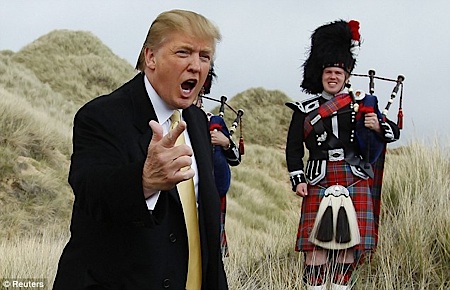 Just last week, I was discussing the question of Donald Trump’s golf course with a senior Scottish politician. He was curious as to whether I thought it was actually going to be completed. I said that I doubted it and that I was very concerned about how the Trump organisation was behaving. So concerned, in fact, that I had written a 12,500 word report on the topic!

I also said that whether the project succeeeds or not will just as likely be down to Mr Trump’s actions as those of anyone opposed to what he is doing. Today, my thesis is proved right.

In my report (pages 15-21) I outline in detail Â the circumstances surrounding the Trump Organisation’s attempts to intimidate the Milne family by threatening them with legal action over a disputed boundary. The facts I uncovered shocked me and should shock anyone who believes in fairness and human rights. But little did I think that Mr Trump would in fact persist with his bluster and threats. Yet that is exactly what he is doing according to a report in the Press and Journal today.

Trump International have accused Mr and Mrs Milne of “knowingly trying to steal our land” and has insisted that if the Milnes do not demolish their garage, that the organisation will proceed with legal action.

This is a very serious escalation in the campaign of intimidation being waged by the Trump Organisation.

Words fail me at this point in expressing how I feel about this. Maybe it’s best to leave it to Mr Trump himself. Near the beginning of this film, he says quite clearly that he wants rid of David and Moira Milne’s house. It is thus perhaps not surprising that he is now making clear his intent to destroy their property through legal action.

I subtitled my report “Lessons for the New Scotland”. Mr Trump clearly is not interested in learning any. Have Scotland’s politicians got anything to say about all of this?