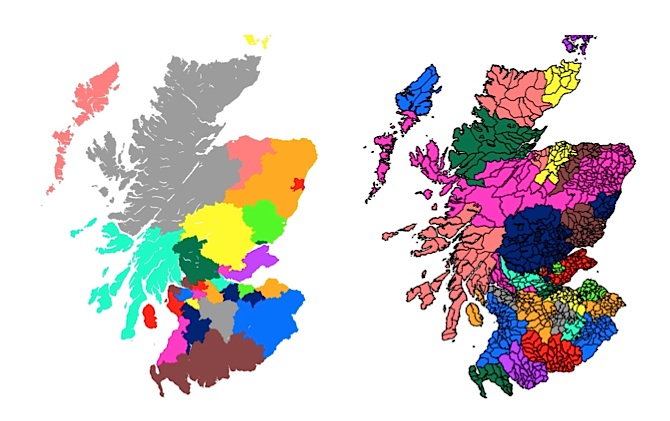 (Following my tweets today – if you simply want the source for the statistics and brief descriptions of the functions of the various tiers, download and read Local and regional Government Structures in Europe. Structures and Competences published by the Council of European Municipalities and Regions and for more background arguments of reform, read Jimmy Reid Foundation report)

For those who wish a little bit more context, please read on.

According to a report in Scotland on Sunday today, Kenny MacAskill, the Cabinet Secretary for Justice, believes that it is “inevitable” that Scotland’s local authorities and health boards will have to be consolidated.

“Speaking at the International Policing Conference in Edinburgh last week, MacAskill was asked by David Strang, chief constable of Lothian and Borders, if it was right that Scotland could move to one police force, but continue to have 32 local authorities and 15 health boards.

MacAskill replied: “These things are inevitable. Scotland has to address these things and we have to take wider stakeholders with us.

“Where the police are, where they have gone, I think some of my colleagues will look to learn from.

If anyone who was at the conference recorded the exchange on a “spypen” or similar, I would be grateful for a transcript. It should be noted that the Scottish government has said that it has “no plans to merge local authorities“.

This instinct for centralisation is not unique to MacAskill (a politician whom I like and admire) but is shared by many Labour and Tory politicians down the years. Labour was responsible for the abolition of local government in 1975 (“local government” has been a misnomer ever since) and the Conservatives were responsible for the creation of Scotland’s existing unitary authorities in 1996. Community Councils it should be noted are not “local government” since they do not govern, have no statutory requirement even to exist, and have no financial powers. They were a sop introduced in the 1973 Local Government Act to appease widespread anger at the abolition of Town Councils.

One might go further back. The Officers of Burghs Act 1469 abolished direct elections in Scotland’s Royal Burghs.

“As touching the election of aldermen, bailies and other officers of burghs, because of the great disturbance and contention each year for the choosing of the same through the multitude and clamour of common simple persons, it is thought expedient that neither officers nor council be continued according to the king’s laws of burghs for more than a year, and that the choosing of the new officers occur in this manner: that is to say, that the old town council shall choose the new council in such number as is suits the town, and the new council and the old one of the previous year shall choose all officers pertaining to the town, such as aldermen, bailies, dean of guild and other officers…”

Protests by the inhabitants that Councils were failing to hold the statutory annual elections were addressed by an Act that, rather than enforcing the “King’s law of burghs“, abolished it altogether. From 1469 until 1833, Scotland’s Burgh councils were chosen by the outgoing town council. This led to rampant nepotism and corruption which only came to an end following the Burgh Police (Scotland) Act 1833. Accounts of the affairs in Scotland’s burghs are laid out in some detail in the 1835 Royal Commission report into the Municipal Corporations of Scotland and treated to a searing satire in John Galt’s The Provost published in 1822.

The high watermark of Scotland’s municipal institutions was probably around 1870 – 1910 when Scotland’s cities and Burghs enjoyed substantial political and fiscal autonomy. In 1975, Scotland’s system of local government that had remained little changed for centuries was abolished and a whole tier of elected councils was eliminated. As a consequence of this single Act, Scotland now stands apart from every other country in Europe in having no local government.

The history can be illustrated by the example of Fife

The trend is clear.

Today, in response to the Scotland on Sunday report, I published a series of tweets illustrating what local government looks like in other European countries. The data and a simple guide to the functions of the different tiers of government are abstracted from Local and regional Government Structures in Europe. Structures and Competences published by the Council of European Municipalities and Regions earlier this year. The following table shows data for the lowest tier of local government across Europe for selected countries and is sorted by “Mean Municipality Population”. (1)

What this table shows is that Scotland is the least democratic country in Europe – a conclusion that stands even if you include every country in the EU or indeed every country in continental Europe. It has the largest population (per lowest tier of local government) covering the largest geographic area.

Countries of similar population have far more councils. Norway has 430, Finland has 336 and Denmark has 98. Countries that are a similar geographic size to Scotland also have a denser network of councils. Latvia has 119, Lithuania 60 and Austria 2357.

The recent report by the Jimmy Reid Foundation – The Silent Crisis: Failure and Revival in Local Democracy in Scotland – examines in considerable detail the impact this disparity has had on Scottish democracy (including the impact on voting turnout – where Scotland again is bottom of the league). To understand the scale of the crisis this report is a must-read.

The arguments for greater local democracy have been articulated in recent years by a growing number of people.

The Christie Commission concluded that

7.37 At the same time, we saw evidence which demonstrated that Scotland has the lowest number of local councils among European countries of similar population size, This suggests that it is the joining up of discrete service functions at a local level rather than the number of discrete council areas that is the key issue.

If we look at other European countries with comparable populations (Sweden, Finland, Denmark, Norway, etc.), they have at least 3 times the number of councils we have, and in some cases more than 6 times. As importantly, these small councils are running a complex array of services (community health, social care, schools, local policing) and often raising the bulk of their income through local taxation.

And commentators as diverse as Lesley Riddoch, Alex Massie, Alf Young and Brian Monteith have all argued that  local democracy is not working for the benefit of the people of Scotland.

“The relationship between central and local government in England deviates from the European norm in at least three areas – the level of constitutional protection,(2) the level of financial autonomy, and the level of central government intervention. All serve to tilt the balance of power towards the centre.” (para38)

In a future blog I will propose a new scheme of local government in Scotland. Meanwhile, the question we need to address is why is Scotland the least democratic country in Europe and why do we have such difficulty imagining that we could devise arrangements more closely aligned to the European norm?

(1) Data derived from Local and regional Government Structures in Europe. Structures and Competences and Eurostat, Population and social conditions 31/2009.

(2) For an analysis of the constitutional status of local government across Europe, see this report prepared by Central Research Unit of the Scottish Office in 1998. This is an important issue. In Germany, for example, Angela Merkel would be unable to enter a Federal election promising a German equivalent of the council tax freeze as this would breach Article 28 of the german Constitution which entrenches the fiscal autonomy of the Lander and Municipalities.