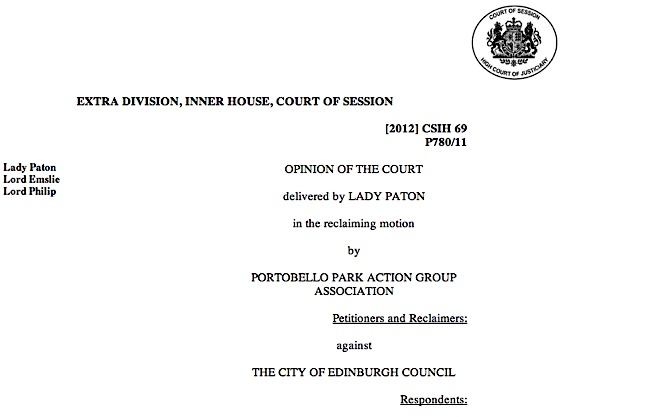 Lady Paton handed down a dramatic decision of the Inner House of the Court of Session today and ruled that Edinburgh Council does not have the legal authority to build a new school on Portobello Park. This has been a long-running saga and has, tragically, caused very deep divisions in Portobello which I will come to in a moment. Briefly the story is as follows.

Edinburgh Council is keen to replace the ageing and decrepit Portobello High School and build a new school fit for the 21st century. After examining a variety of sites, it chose Portobello Park as the preferred site. This led to a the Portobello Park Action Group (PPAG) being formed to campaign against the building of the school in the park. They complained of the loss of greenspace and also brought into the debate the fact that Portobello Park is common good land (a fact initially disputed by the Council). Common Good land is subject to a range of restrictions on how it can be disposed of and used. The Council sought it’s own legal opinion on whether it had the authority to go ahead and satisfied itself that it did. Planning consent and contractual matters where then agreed. In July 2011, PPAG sought a judicial review of the Council’s decision to build the school and on 7 March 2012, Lady Dorrian rejected the pleas of PPAG and gave the green light for the Council to build the school. Her grounds were that the PPAG were too late in bringing their case and that, in any event, the law on common good gave the Council a wide discretion to appropriate common good land. PPAG appealed and today Lady Paton upheld the appeal and concluded that PPAG were not too late and that the Council have no authority to build a school on common good land.

I offer a few brief observations.

I was wrong when I offered the view that this appeal was unlikely to succeed. My view at the time was informed by the narrow point in law and the lack of much legal precedent for situations where a local authority was “appropriating” as opposed to selling common good land. Lady Paton’s ruling makes it very clear that there are significant hurdles to overcome before inalienable common good land can be appropriated for another use.

The law on common good is vague and always open to the interpretation of the Courts. Several attempts since 2004 to persuade the Scottish Government to review the law have fallen on deaf ears. The law does need placed on a new statutory footing. Common Good features as a modest part of the consultation on the Community Empowerment and Renewal Bill but what we need now is a new statute. I and others are working on such a statute and hope to have the draft outlines of a Bill ready by the end of 2012.

Citizens of Scotland’s burghs should have the right to take legal action in defence of their common good. However, the appeal by PPAG was, in part I believe, driven by the self-interest of property owners in the vicinity of the park.

The City of Edinburgh Council should have known that this land was common good. That they did not is a reflection of a long history of neglect in the stewardship of the Common Good Fund. At an early stage the Council should have sought legal authority for their proposals. This is common practice. Their failure to do so contributed to today’s outcome.

The community of Portobello has been left deeply divided. This is tragic when the matter at hand is the building of a much needed news school.But the reasons for this division is not the need for a new school but the inadequate legal framework governing common good and the arrogant behaviour of the Council.

Local government needs reformed. Indeed, we do not have local government – merely a poor form of regional government. Decisions about common good in, say Pittenweem or Perth should not be taken by Councillors representing the whole of Fife or the whole of Perth and Kinross. Edinburgh, admittedly is a bit different in that its government is solely concerned with the City (though South Queensferry’s Fund is distinct and historically Portobello and Leith have been absorbed).

Lady Paton’s ruling misses out an important fact. The 1898 disposition that transferred the park to Royal Burgh of Edinburgh was a feu disposition. The burdens narrated at [2] are therefore feudal burdens. Section 17 of the Abolition of Feudal Tenure etc. (Scotland) Act abolished all feudal burdens unless any Superior took action to preserve them. No such action was taken in this instance and thus the restrictions are, in my view, irrelevant. Yet, they have been brought into play by Lady Paton. Was she right to do so given that they have been extinguished? Does this have a bearing on the ruling? (1)

Finally, let us not forget in this whole sorry tale the young people of Portobello who deserve a new school. It is tragic that this now seems as distant a prospect as it did at the beginning of this saga.

(1) 1417hrs Robert Sutherland, advocate rightly points out that the abolition of feudal tenure has no bearing on the status of land as a common good. This is correct. He goes on to point out that feudal burdens are not always lost if not preserved. I will encourage him to elaborate further by way of comment on this post.

UPDATE 1 October At the time tis blog was written, I accepted as fact that Portobello Park was common good since it was agreed between PPAG and CEC that it was. Subsequent evidence has cast doubt on this matter.