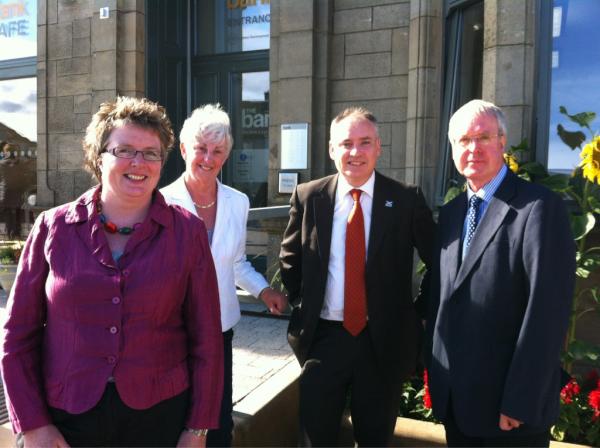 Pictured with Richard Lochhead At the Old Bank in Neilston are Board members of the Land Reform Review Group left to right are Dr Sarah Skerratt, Dr Alison Elliot (Chair), and Professor James Hunter.

The Scottish Government is committed to generating innovative and radical proposals on land reform that will contribute to the success of Scotland for future generations.

The relationship between the land and the people of Scotland is fundamental to the wellbeing, economic success, environmental sustainability and social justice of the country. The structure of land ownership is a defining factor in that relationship: it can facilitate and promote development, but it can also hinder it. In recent years, various approaches to land reform, not least the expansion of community ownership, have contributed positively to a more successful Scotland by assisting in the reduction of barriers to sustainable development, by strengthening communities and by giving them a greater stake in their future. The various strands of land reform that exist in Scotland provide a firm foundation for further developments.

The Government has therefore established a Land Reform Review Group.

The Group will identify how land reform will:

· Enable more people in rural and urban Scotland to have a stake in the ownership, governance, management and use of land, which will lead to a greater diversity of land ownership, and ownership types, in Scotland;

· Assist with the acquisition and management of land (and also land assets) by communities, to make stronger, more resilient, and independent communities which have an even greater stake in their development;

· Generate, support, promote, and deliver new relationships between land, people, economy and environment in Scotland;
In making these inquiries, the Group will bear in mind:

· the sustainability of its proposals for reform, including their economic impact;

· the importance of good stewardship and governance of land;

· the relationship between urban and rural concerns and opportunities;

· the relationship between local and national interests.

· seek representations from, and consult with, organisations (private, public and voluntary sector) and individuals with an involvement or interest in land ownership, farming, crofting, forestry, the natural heritage, social and affordable housing, planning, economic and community development, and with others as appropriate;

· draw on the advice of the Advisers appointed to it;

· make its own independent assessment of this advice and of the varying (and possibly conflicting) views put to it.

The Group will make:

· Interim Reports to Ministers on such improvements as the Group considers can readily and speedily be made to existing legislative and other means of bringing about land reform;

· a draft Final Report to Ministers by December 2013.

It is expected by the Government that the Group’s Final Report will include:

· recommendations as to how, by legislative and other means, further land reform can be promoted and secured;

· an indicative analysis of the economic, social and environmental impact and sustainability of its proposals

· indication of how the impact of the recommendations on land reform might be measured, monitored and otherwise assessed.

This is a welcome and wide-ranging remit.

I no longer agree with my statement above. It appears that the remit has been misrepresented as being wide-ranging and radical. See my blog of 10 June 2013 for analysis.