The Queen and landed power in Scotland 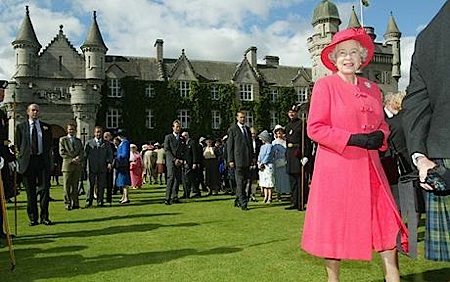 In 1999, I wrote a short book called Scotland: Land & Power. The Agenda for Land Reform. I still have 500 or so copies sitting in boxes beside me which I am slowly getting rid of by leaving copies on buses and popping through the letterboxes of the nobility. As part of the research I tried to map out a network of power and influence starting with the (late) Queen Mother. Here is what I came up with (some of this will now be out of date).

The Queen Mother is the daughter of the 14th Earl of Strathmore. Her sister was married to the 4th Earl of Granville, whose granddaughter, Lady Marcia is married to Jonathan Bulmer. The 2nd Earl of Granville’s daughter was the grandmother of James Morrison, Lord Margadale. Princess Antonia von Preusen, another relative of the Queen is married to the Marquess of Duoro whose father is the 8th Duke of Wellington. The Queen’s former private secretary is Lord Charteris of Amisfield, whose daughter is married to Lord Pearson of Rannoch. Lord Charteris’s brother is the 12th Earl of Wemyss and March, whose daughter, Lady Elizabeth Charteris is married to David Holford Benson, Chairman of Kleinwort Charter Investment Trust. A former Chairman of Kleinwort Benson Group (1993-96) itself is Baron Rockley who is married to the elder daughter of 7th Earl of Cadogan. The Queen is also related to the Earl of Airlie through his brother, Sir Angus Ogilvy who is married to Princess Alexandra of Kent. The Countess of Airlie is also a Lady to the Bedchamber of the Queen. The Earl of Airlie was Chairman of Schroders, the merchant bank from 1977 to 1984 whilst Bruno Schroder himself owns Dunlossit Estate on Islay next door to Lord Margadale! Another relative of the Queen, James Hamilton, the 5th Duke of Abercorn is married to Alexandra Anastasia, whose niece is married to the Duke of Westminster. The Duke’s sister, Lady Jane Grosvenor, was the first wife of the Duke of Roxburghe (Her marriage to Roxburghe made her the daughter of a Duke, the sister of a Duke, the wife of a Duke and finally the mother of a future Duke!). Meanwhile the Queen’s aunt, the Duchess of Gloucester, is the 3rd daughter of the 7th Duke of Buccleuch whose widow is the daughter of the 13th Earl of Home. The current Duke of Buccleuch’s sister is the Duchess of Northumberland whose daughter was the first wife of the Duke of Sutherland. The Duke of Buccleuch’s son and heir is Richard Walter John Montague Douglas Scott, the Earl of Dalkeith. Richard is married to Lady Elizabeth Kerr, the youngest daughter of the 12th Marquess of Lothian. Lady Elizabeth’s sister, Lady Cecil Kerr, is married to Donald Cameron of Locheil (younger). The hereditary master of the Queen’s household in Scotland is Ian Campbell, the 12th Duke of Argyll who is married to the daughter of Sir Ivar Colquhoun of Luss whose nephew is Sir Michael Wigan. Sir Ivar’s sister is the widow of the 8th Earl of Arran. The great-grandson of the 4th Earl of Arran’s brother married the daughter of the 4th Earl of Cawdor. Going back to Donald Cameron for a minute – his grandmother was the daughter of the 5th Duke of Montrose whose son, the 6th Duke, was the father of Lady Jean Fforde, the mother of Charles Fforde from Arran. The 6th Duke’s niece married the late Thomas Campbell-Preston whose half-sister is Sarah Troughton. Thomas’s father, Robert Campbell-Preston was married to Angela Pearson, the 3rd daughter of 2nd Viscount Cowdray and the mother (by her first marriage) of the late Duke of Atholl. A scion of the Atholl Murrays is the Earl of Mansfield whose sister is married to the 20th Earl of Moray. Meanwhile the Atholl Estates factor, Andrew Gordon, is also the factor for Robin Fleming, whose cousin, Dorothy Fleming (who married his brother, Major Richard Fleming), together with her sister Mrs Schuster (And husband Richard Schuster, are also Argyllshire landowners. Robert was chairman of Robert Fleming Holdings from 1990 – 1997 of which Henry Keswick is also a Director. Henry and his youngest brother Simon are Chairman and Director of Jardine Matheson Holdings Ltd. (whose founder, James Matheson, at one time owned the Island of Lewis). At least six other Dumfriesshire landowners have close connections with Jardine Matheson. Henry is married to Tessa, Lady Reay, younger daughter of the late Lord Lovat whilst Henry’s other brother, Sir John “Chips” Keswick, Chairman of Hambro’s Bank, is married to Lady Sarah Ramsay, daughter of the 16th Earl of Dalhousie who himself is related to the Lovats through his wife whose mother was the daughter of the 13th Lord Lovat. The 16th Earl of Dalhousie’s cousin is Captain Ramsay of Mar and his late mother was Lady Mary Heathcote-Drummond-Willoughby, daughter of the 1st Earl of Ancaster. Her great niece is Baroness Jane Heathcote-Drummond-Willoughby de Eresby whose grandfather on her mother’s side was the 2nd Viscount Astor. The second son of the 1st Viscount Astor was the 1st Baron Astor of Hever whose grandson is Philip Astor. Philip’s sister, the Honourable Sarah Violet Astor is married to George Lopes. The first Baron Astor’s wife was the mother of the Marquess of Landsdowne and the daughter of the 4th Earl of Minto. The son and heir of the Marquess is the Earl of Shelbourne whose brother is Lord Robert Mercer-Nairne, someone who, as we will see, has some interesting views on tenant farming.

That lot own over 12% of the private land in Scotland!

and have a long-lease on

In 1997, I wrote this essay about Balmoral for the first edition of Bella Caledonia